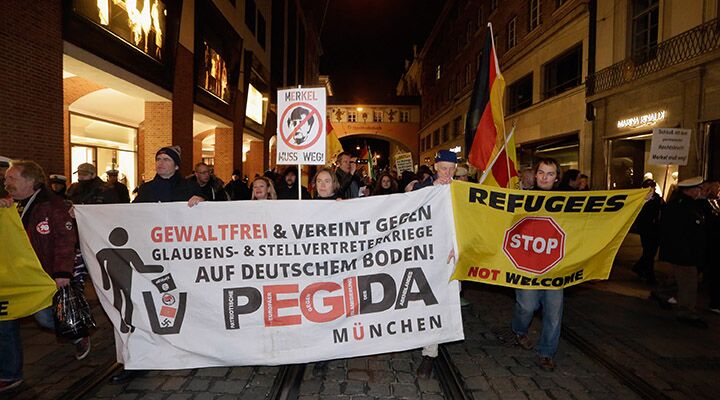 More and more Germans are realizing the terrifying urgency of this age. To them, it’s time to stand up and fight!

Germany has been pushed to the brink. In 2014, it was about to pull Ukraine further from Russia’s orbit to form an alliance with the European Union. That is, until Vladimir Putin strong-armed Ukraine back into its place as Russia’s little brother. More recently, refugees from war-torn Syria and who knows where else have overrun the Continent—more than 1 million of them entered Germany in 2015. The police department in Cologne has received 581 complaints of sexual assault that occurred on New Year’s Eve—mostly perpetrated by migrants.

As world events spiral out of control, the Germans have developed a heightened sense of urgency in building up their military. We know that Germany will soon become a massive superpower, perhaps stronger than America. This is a dominant nation, economically and now militarily.

But how does a far-off European nation like Germany affect you? Here is what George Friedman wrote in Stratfor Geopolitical Weekly on Feb. 4, 2014:

Since the end of World War ii, Germany has pursued a relatively tame foreign policy. But … Berlin appeared to have acknowledged the need for a fairly dramatic change. German leaders, including the chancellor, the president, the foreign minister and the defense minister, have called for a new framework that contravenes the restraint Germany has practiced for so long. They want Germany to assume a greater international role by becoming more involved outside its borders politically and militarily. … It has to adjust to the U.S. policy of global disengagement, and it must manage a complex, necessary and dangerous relationship with Russia.

Germany, Russia, China, Iran and other nations see the huge leadership vacuum left by America. They are scrambling to fill it. “[F]or Germany, it is a radical position, given its experience in World War ii,” Friedman wrote. “It has refrained from asserting a strong foreign policy and from promoting its national interest lest it revive fears of German aggression and German nationalism.”

America’s isolationist tendencies during World War ii angered reporter Edward R. Murrow. Long after the war, in 1958, he broadcasted from a concentration camp. “I was impressed with the absence of any feeling of guilt,” he said after returning to London. “No one has yet produced a formula for ridding the German people of their appetite for war, their recurring desire to shoot people and to take their land and their homes.”

I have nothing against the German people, but they have been shaped by the bloody Holy Roman Empire that formed under Justinian in a.d. 554. There are powerful lessons to be learned from history. Your Bible says the German war machine will rise one last time in this age! Evidence of this abounds. That’s why Germany matters to you.

Germans are outraged that the U.S. National Security Agency wiretapped Chancellor Angela Merkel’s private phone. More recently, France turned to the European Union—not the American-led nato—for defense assistance following the Paris massacre on November 13. America is quickly falling out of favor with Germany and losing influence on the Continent as a whole. This is cause for great concern.

“Either something new must be introduced into the European experiment, or it might come undone,” Stratfor wrote. “Berlin believes that holding the European Union together requires adding another dimension that it heretofore has withheld in its dealing with the bloc: military-political relations.”

We have warned for 70 years about Europe uniting! Your Bible has approximately 100 prophecies about this. “In her eight years in office thus far, Merkel has lost faith in the notion that military intervention can bring about improvements,” wrote Europe in Review in an article titled “Foreign Policy Rethink—Germany Weighs Stronger Military Role” (Jan. 28, 2014). “She was particularly disillusioned by the German Army’s mission in Afghanistan.” She has also tried to cover up criminal activity by refugees so more can flood into Germany. Her way of thinking differs sharply from most German elites, and that will lead to her downfall. A strongman will soon unseat her (Daniel 8:23).

The EU currently consists of 28 member nations. How can Europe consolidate and unify under a central command with so many independent parts? The European superpower led by Germany will soon pare itself down to 10 nations (Revelation 13 and 17).

“And there are seven kings: five are fallen, and one is, and the other is not yet come; and when he cometh, he must continue a short space” (Revelation 17:10). God revealed this prophecy to the late Herbert W. Armstrong during the time when “one is.” The seventh and final resurrection of the Holy Roman Empire is “not yet come,” but we can see it building before our eyes!

“The [European] Community is living largely by the heritage of the Holy Roman Empire, though the great majority of the people who live by it don’t know by what heritage they live,” European member of Parliament Otto von Habsburg said.

Most people today are dangerously ignorant of history. Charlemagne led the second resurrection of the Holy Roman Empire. He waded through blood to subjugate as many people as possible to the Roman Catholic Church—even executing 4,500 Saxon prisoners in one day. Adolf Hitler, the sixth king, looked to Charlemagne as his role model!

“Our leading generals in Europe adamantly warn that Germany is a calculated risk!” wrote Mr. Armstrong’s Good News magazine in 1952 in an article titled “Does America Dare Arm Germany?” “Why will the diplomats think that today the hearts of the people in Germany are different from yesterday? Every one of those undemocratic nations, when once armed, has turned upon us.”

Our peoples forget not only the history of Charlemagne, but they even disregard the history of Adolf Hitler from less than a century ago! Such ignorance of history makes possible the seven resurrections of the beast!

The final leader of this beast power will take everyone by surprise. “And in his estate shall stand up a vile person, to whom they shall not give the honour of the kingdom: but he shall come in peaceably, and obtain the kingdom by flatteries” (Daniel 11:21). The German strongman will not win an election!

“And his power shall be mighty, but not by his own power: and he shall destroy wonderfully, and shall prosper, and practise, and shall destroy the mighty and the holy people. And through his policy also he shall cause craft to prosper in his hand; and he shall magnify himself in his heart, and by peace shall destroy many: he shall also stand up against the Prince of princes; but he shall be broken without hand” (Daniel 8:24-25).

The German people want war. It’s in their national identity. The good news in the current military buildup taking place in Germany is that Jesus Christ will crush this beast power and bring peace and joy to this world forever!