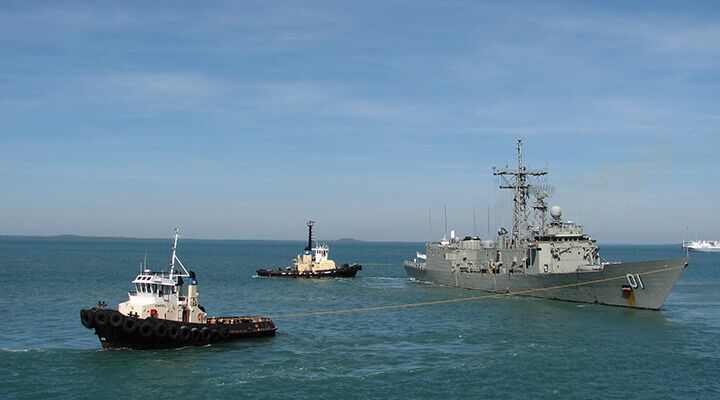 For the next century, Australia’s northernmost port—Darwin Port—will be controlled exclusively by the Chinese. In an October 13 announcement, Chinese-owned Landbridge Group was revealed as the corporation that will now have day-to-day operation and control of the port for the next 99 years—all for the meager sum of aus$506 million. The hastily constructed deal will lead to a major upheaval of both Australian and American military and commercial operations surrounding the port.

Landbridge has repeatedly asserted that it is a “private” enterprise. But like many major Chinese corporations, company ownership is murky at best. Landbridge chairman Ye Cheng is intimately tied to the government of the People’s Republic of China. He is a senior member of the 12th National Chinese People’s Political Consultative Conference Committee. Landbridge takes its orders from the Central Committee of the Communist Party of China. This committee ensures that Chinese companies act in accordance with the party-state’s interests and strategies. When you deal with a company like Landbridge—even if it is officially “private”—you are dealing with the Chinese government.

But the identity of Landbridge goes deeper still. Liberal Sen. Bill Heffernan called for more scrutiny of the company after claims arose of it being a commercial front for the Chinese military.

The company’s website reveals the creation of a “people’s armed militia” by the Landbridge Group. That’s right: an armed militia created by a “private” company.

This is the company that will now control the Port of Darwin. Be it a self-professed “private” enterprise or not, its intricate links to the Communist Party and military of China should be cause enough for the Australian government to scrap the deal.

The contract has thrown Australia directly into the middle of a heated contest between the United States and China. And as we have already seen, the move has undoubtedly vastly empowered China—to the detriment of America.

United States President Barack Obama is understandably upset at the contract. The U.S. has marines and support vessels stationed in Darwin, and it has just signed off on a deal with Australia that would see the number of troops rise to 2,500.

But now, given Landbridge’s ties to the Chinese military, the security of those troops is being called into question. Both U.S. and Australian forces will now be exposed to the threat of the intelligence-gathering Chinese. Tactics, techniques, force sizes, procedures and traffic—all can be monitored from the Chinese-controlled harbor.

The troops will be totally exposed in a region where countering Chinese interests through the military and economic means is paramount.

With so much on the line, it would be a fair assumption that the Australian government would take time to debate the sale. After all, it is binding for a century. But such an assumption would be wrong. Officials only allowed 16 days for public submissions on the deal. The government said that the defense forces were happy with the deal. But who was asked? And what were they asked?

Australian Defense Minister Marise Payne only knew about the lease “a few hours” before the contract was announced by the Northern Territory government. President Obama didn’t know beforehand at all. Read that again. The president of Australia’s most vital ally, and a pivotal bulwark against the onset of Asian influence—the country that stations 2,500 troops right there in Darwin—was not even told.

Prime Minister Malcolm Turnbull likely spent more time getting his wife’s opinion on which tie to wear the morning of the deal than he did in conversation with President Obama.

So why the nonchalant approach by Australia’s prime minister? Deflecting criticism, Turnbull stressed that the port was not a naval base, thus security was not being compromised. He said the defense department had no concerns because “it didn’t affect the Australian Defense Forces.”

“Vital” here means absolutely necessary, essential. This means the port’s control for the next 100 years by the Chinese does in fact affect the Australian Defense Force.

Further still, more than 100 Australian Navy and allied vessels visit the port every year, and that number is expected to grow. Those vessels will be jostling for position on a wharf that is now to be run by the Landbridge Group.

A planned aus$18 million amphibious vehicle ramp in the harbor will now only grant Australian military vehicles 60 days access per year, with the rest of the year made available to commercial shipping—and this deal is only guaranteed for the next 20 years. Does that sound like it will affect Australia’s or America’s militaries?

In all of this, the Australian government has proven cavalier. Turnbull even joked that President Obama should subscribe to the Northern Territory paper if he wants to know what is going on there. Really? The security of the nation’s northern borders and the broader regional balance of power could hinge on this port acquisition, and Turnbull finds time to laugh at the predicament he has placed both Australia and the United States in.

Turnbull’s decision-making is careless. The government can get its hands on more than enough material evidence. They know what China is doing. Anyone can look at the South China Sea and recognize what is happening. Anyone can see China’s growing presence in the Pacific.

The government is making careless decisions on national security when considering foreign investment, particularly by China.

Australia is buying into China’s global strategy. Look around the Pacific for proof:

If controlling the Port of Darwin doesn’t sound like a key step for China, then what does?

Australia has kneecapped its ability to defend its northern borders, sabotaged U.S. interests in the Pacific, and empowered the one Pacific nation that poses a direct economic and potential military threat to the land down under. Australia’s naval countermeasures and Austro-U.S. counterbalance to China have effectively been sold for aus$506 million.

According to a report from the Australian Strategic Policy Institute:

Australia’s strategic interests, including responding to increasingly assertive Chinese maritime behavior in the South and East China seas, now have to be balanced against the reality of operating out of a harbor run by a company whose website proclaims it is “contributing its best to … realizing the great rejuvenation of the Chinese dream.”

So what is that dream and how can Landbridge help achieve it?

China wants control. And to gain that dominance, China needs connectivity. Trade routes need to be established. Alliances must be made. Look at the port control China has today. It may not have the naval force to control the entirety of Southeast Asia, but it can stop others from having such a force. Anyone wanting to trade through Southeast Asia must pay homage to China.

It is what China calls the Belt and Road Initiative. China says this initiative is to “enhance regional connectivity and embrace a brighter future together.”

While China calls it the Belt and Road Initiative, it has been known in other geopolitical circles as the Silk Road and the String of Pearls: a network of ports, sea-lanes, pipelines and roads—all trailing back to China. These trade routes branch to Europe, the Middle East, Africa and the Pacific. The acquisition of the Port of Darwin is a vital link in China’s plan to connect and establish its presence.

And this is as far as most will care to go. Critics of the deal will usually cite China’s unprecedented economic stranglehold on Australia but leave it at that. Some will perhaps say that the deal undermines or threatens Australia’s security but will go no further.

However, China’s goals do extend much further than mere economic interests. There is a military goal, and it needs to be addressed.

You don’t have to be an elite member of the Chinese Communist Party to recognize that China has nefarious plans for the Pacific—that the economic goals of China are interwoven with military strategies.

Just look at China’s belligerence in the South China Sea. It is building islands—unsinkable aircraft carriers—within Philippine territorial waters. China says the islands are going to be used for trade. The bristling armaments are for defense, and the runways usable by all military planes are for refueling purposes. China violates age-old maritime treaties and bullies its neighbors constantly. Doesn’t that give some indication of China’s real goals? If those islands can receive a tanker, they can take an aircraft carrier, battleship or transport ship. Warplanes can land on runways just as easily as any aircraft. Could this be interwoven economic and military planning?

Now consider that China has eyes on some of the most vital sea-lanes in the region. Ports aren’t just ports; they are watchtowers. China will see every ship that goes through, be it military or commercial. Controlling a port used by U.S. and Australian naval operations gives China both military and economic benefits.

Consider also the trade routes: China’s economic trade routes can easily be used as economic choke-points in times of war. Straits that allow ships through today can stop their entry tomorrow. Ports that shelter tankers today can harbor battleships in the morning.

You can say that China’s actions are purely economic, but at the end of the day, all that China is doing in Darwin, Hambantota, Gwadar, Djibouti and elsewhere will benefit China in the event of military confrontation.

But so few will admit it, and Australia should know better.

There was a time when Darwin burned because Southeast Asia was under the control of a single Asiatic power. On Feb. 19, 1942, Japanese bombers hit the port town. It was the first and largest attack on Australia by a foreign power. At least four key vessels were sunk in the harbor. Only a few Japanese aircraft were shot down. Woefully outmatched by the 188 enemy aircraft, the Australian forces were hit hard. At least 243 people were killed, and 300-400 were wounded. At least half of the population of Darwin fled south.

Darwin was going to be a base for operations into Asia. Japan had recognized the value of the port and put an end to its use.

The planes had come from carriers in the Timor Sea. They were there because Japan had seized control of nearly every seaway and island to the north. Singapore had fallen just days earlier, the Philippines two months prior. Japan had come down from the north and seized control.

Today cannot necessarily be compared to World War ii in the Pacific, but the lessons should still be ringing in the ears of Australians. If China and the U.S. should go toe-to-toe, it won’t be World War ii again. Japan had to fight its way south. China is already here. Ports and harbors, straits and seas, all have a Chinese presence already. It can’t guarantee Chinese supremacy, but having the trade routes established allows China a distinct advantage from the outset.

The West doesn’t want war. Australia doesn’t want to see Darwin billowing smoke. But selling Darwin to China for a century is no way to help maintain a balance of power in the region. Australia just offered up its northernmost port to the one nation that is actively enacting aggressive economic and military policies in the region.

Keep watching theTrumpet.com. Darwin was not the first pivotal maritime foothold to be lost to China, nor will it be the last.