The time when Taiwan will be swallowed is approaching. 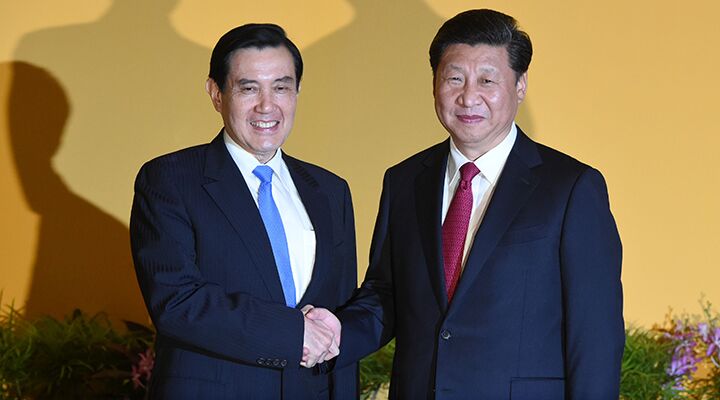 The time when Taiwan will be swallowed is approaching.

On November 7, when the hands of Taiwanese President Ma Ying-jeou and Chinese President Xi Jinping came together for a shake, they stretched across a divide that has separated the two nations for more than 65 years.

The presidential meeting was the first in history for the two countries. It holds deep significance because ties between Taiwan and China have been frosty for as long as the two have existed as separate nations.

Where Did Taiwan Come From?

That separation was the result of a bloody civil war between the Communist Party and the ruling party at the time, the Kuomintang. The war raged in mainland China from 1927 until 1950.

By 1949, the Communists had defeated the Kuomintang, forcing its members to flee to the island of Taiwan. Ever since, China, under the Communist Party, has actively claimed ownership of Taiwan. It views Taiwan as kind of an offshore rebel province and has often vowed to use force to dominate Taiwan. What is less publicized in the Western press is that the Taiwanese likewise claim ownership of mainland China.

For decades, the Taiwanese have lived in fear of invasion from Chinese forces. But this tiny island has stayed independent thanks to military equipment, political support and a promise from an ally that also happens to be a superpower, the United States.

But America’s support for Taiwanese independence has diminished. In 1998, Bill Clinton became the first American president to publicly oppose Taiwanese independence. Trumpet editor in chief Gerald Flurry said it meant it was only a matter of time before Taiwan would come under China’s rule.

How could anyone fail to see that Taiwan is destined to become a part of mainland China? These 21 million people are going to be forced into the Chinese mold; and it is going to happen for one reason: because of a pitifully weak-willed America.
Gerald Flurry

“The Chinese leaders pressured the president and America to speak against our freedom-loving friends [in Taiwan],” Mr. Flurry wrote. “The people of Taiwan fear for their future. They feel betrayed. … Once again, America has showcased its broken will to the whole world. … How could anyone fail to see that Taiwan is destined to become a part of mainland China? These 21 million people are going to be forced into the Chinese mold; and it is going to happen for one reason: because of a pitifully weak-willed America. Does freedom really mean so little to us?” (Trumpet, August 1998).

At the time that was written, the idea of Taiwan becoming assimilated into China may have seemed likely only in the distant future. But not now.

Ever since he was elected in 2008, President Ma has made it a high priority to improve Taiwan’s relationship with China. That has largely equated to giving in to Beijing.

“The two sides of the Taiwan Strait should not quarrel,” Ma said in 2011. “We should instead focus on encouraging and helping each other grow ….”

Many Taiwanese worry about Ma’s capitulations to China. Hundreds of thousands have taken to the streets to protest trade deals he has made with China on the grounds that they give Beijing dangerous political leverage over Taiwan.

But in light of America’s track record of a weak foreign policy, especially under the Obama administration, Ma’s actions are logical. He sees the United States retreating from its role as global stabilizer. He sees America abandoning its allies and kowtowing to its enemies. And he may well have concluded that the U.S.’s security assurances are worthless, and that it is wise to appease China.

Whether or not that is his calculus, Ma’s actions have emboldened the Chinese. In 2013, President Xi told a Taiwanese government official that, when it comes to accomplishing Beijing’s goal of uniting Taiwan with the mainland, “these issues cannot be passed on from generation to generation.”

Xi is anxious to bring the “renegade province” under Chinese control, and he too sees that America no longer has the strength of will to defend Taiwan.

Now, Ma has gone so far as to meet with the Chinese president in a deeply symbolic move. Xi said the meeting marked “a new chapter in the cross-strait relationship,” adding that the separation “has caused deep pain and regrets to countless families.”

In a nod to communism, Xi called Ma “comrade,” and said the blood connecting the two sides “is thicker than [the] water” that separates them.

Ma’s presidency is scheduled to end on Jan. 16, 2016. And his party may well lose to the Democratic Progressive Party (dpp). When the dpp was previously in power, it took a stance opposite Ma’s—aggressively pushing a pro-independence agenda. If it returns to power, it would likely follow the same path, trying to reverse the moves toward China that Ma has made.

Would Beijing tolerate a Taiwan that is less cooperative than it has been under Ma? Likely not. This may be the moment when China reacts and swallows Taiwan. If that happens, as Mr. Flurry said, “it is going to happen for one reason: because of a pitifully weak-willed America.”