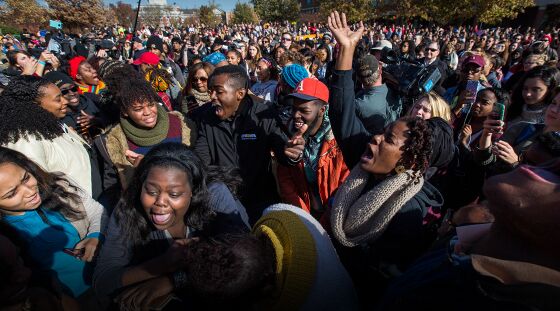 College students are rising up to protest systemic hatred and racism. Are they solving problems or creating them?

Last week at Vanderbilt University in Tennessee, a student group called Hidden Dores staged a protest. A couple hundred students demonstrated, complaining about racism on campus and making demands about what the school needed to do to eliminate it.

The day after the protest, a black bag was found on the front steps of the Bishop Joseph Johnson Black Cultural Center on the campus. There was poop in the bag.

The protesters were outraged at what they branded as obvious racism. “The Hidden Dores team is appalled to announce that our demonstration yesterday was met this morning with a vile act,” they wrote in a Facebook post. “This morning someone left a bag of feces on the porch of Vanderbilt University’s Black Cultural Center. … As many of us sit in grief, recognize that these types of actions are what we speak of when we note the reality of exclusion and isolation of students of color and specifically Black students on our campus. This act has hurt many and will not be received lightly. We will not allow for the desecration of the place we call home. As we announced yesterday and reaffirm today, we will not be silent.”

The campus police sprang into action, and by that night they had located the offender. A security camera revealed that it was a blind female student: Her seeing eye dog pooped; she cleaned it up and, being blind, was unable to locate a trashcan. So she did what she had been instructed to do: She left it outside the door of the nearest building so the next person coming along could put it in the trash. “Everyone is going to point me out now as the blind girl who left her dog feces by the black cultural center,” she posted on Facebook. “I am sorry that I do not know where all the trash cans are on main campus.”

Students had been “sitting in grief” and “hurting” over a hate crime they invented. They were rushing to the barricades of racial justice over a fiction.

How many other improperly disposed-of bags of feces are being trumped up into cause for war? This is a colorful metaphor for a problem besieging America’s higher education: the hypersensitivity that startles and then raises Cain over the slightest perceived offense.

Vanderbilt’s racist dog doo takes its place among an increasing number of such head-shaking, quasi-comical incidents. It represents a misguided quest for justice that is creating problems far worse than those it purports to solve.

Earlier this month at Yale University, an incident caused students to feel unsafe, under attack, unable to bear living in the college anymore. “I have friends who are not going to class, who are not doing their homework, who are losing sleep, who are skipping meals, and who are having breakdowns,” one student wrote in a campus publication. What caused such distress and anguish? It was an e-mail from a school official suggesting that administrators’ overconcern about Halloween costumes like feathered headdresses, turbans, “war paint” and blackface wasn’t giving students enough personal freedom. Outraged students demanded that this official and her husband, who tried to defend the importance of freedom of speech, be fired.

“These are young people who live in safe, heated buildings with two Steinway grand pianos, an indoor basketball court, a courtyard with hammocks and picnic tables, a computer lab, a dance studio, a gym, a movie theater, a film-editing lab, billiard tables, an art gallery, and four music practice rooms,” wrote Conor Friedersdorf at the Atlantic. “But they can’t bear this setting that millions of people would risk their lives to inhabit—because one woman wrote an e-mail that hurt their feelings?” (“The New Intolerance of Student Activism”).

This is what the best and brightest in America’s highest universities are being taught to think. They are being trained how to be offended—trained to detect aggression where there is none.

The buzzword for these concocted crimes is microaggressions—”small actions or word choices that seem on their face to have no malicious intent but that are thought of as a kind of violence nonetheless.” That is how Greg Lukianoff and Jonathan Haidt defined microaggressions in their September 2015 Atlantic article, “The Coddling of the American Mind.” They describe, for example, campus guidelines branding it a microaggression to ask an Asian American “Where were you born?”—“because this implies that he or she is not a real American.” In a list of offensive statements presented to deans and department chairs at the 10 University of California system schools, these microaggressions were included: “America is the land of opportunity” and “I believe the most qualified person should get the job.” The horror.

This isn’t just funny and ridiculous. It is a serious problem—because we are seeing America’s future. It is the nation’s educational system that produces tomorrow’s leaders.

These young people are radical. They cherish extremely divisive and dangerous ideas of what justice looks like, what society owes them, and how they should be able to shut down anyone who disagrees with them. They are gaining more and more power, abetted by authorities who came out of the same educational system.

“For almost 50 years universities have adopted racialist policies in the name of equality, repressive speech codes in the name of tolerance, ideological orthodoxy in the name of intellectual freedom,” wrote Bret Stephens in his Wall Street Journal column this week. “Sooner or later, Orwellian methods will lead to Orwellian outcomes. Those coddled, bullying undergrads shouting their demands for safer spaces, easier classes, and additional racial set-asides are exactly what the campus faculty and administrators deserve.

“In other words, the radical children who grew up to run the universities have duplicated the achievement of their parents, and taken it a step further. In three generations, the campuses have moved from indulgent liberalism to destructive radicalism to the raised-fist racialism of the present …” (“Radical Parents, Despotic Children”).

The brand of justice these students are demanding does not exist. Perfect conformity with their expectations will never be achieved. Supposedly systemic problems like racism and white privilege are whatever they feel they are. If they say something is microaggressive or makes them feel unsafe, everyone must accommodate and fulfill their demands, no matter how bizarre or off the wall. Failure to completely agree is evidence of racism; opposition is proof of bigotry and privilege.

Meanwhile, these students are themselves immune from standards of civility and decency. Screaming, bullying, fighting—these are legitimate tools in their supposedly noble war on supposed intolerance. This misguided movement offers no actual solutions. Its aim is simply to protest, accuse, malign, get people fired and cause a ruckus.

These students’ notion that they will achieve justice by manufacturing racial grievance is extremely dangerous. In fact, their mission to expose hidden bigotry is fomenting blatant racism, overt hatred and actual conflict.

Evidence of a backlash among whites in the U.S. against these incidents is emerging. The Washington Post reported November 20 on a “Illini White Students Union” Facebook page: “Created Wednesday after a protest sympathetic to Black Lives Matter, the page declared itself ‘for white students of University of Illinois to be able to form a community and discuss our own issues as well as be able to organize against the terrorism we have been facing from Black Lives Matter activists on campus,’ as the Daily Illini reported.” The page said it was about “white pride and a safe place for white students.” Another part of the site encouraged people to send it pictures of black protestors on campus “so we know who anti-whites are.”

Following up on the Post story, the College Fix found more than 30 “White Student Union” pages on Facebook created within just the prior week, at prominent universities including Standford, Penn State, ucla, UC Berkeley, the University of Missouri and nyu. Several of these pages say, “We affirm the dignity and ancestry of our proud people who have gifted the world with countless works of beauty, science and wisdom, and are committed to promoting a dialogue and political resistance that will secure a future for our posterity and spirit.”

Is this all that surprising? These students are simply creating Facebook pages that containing essentially the same language that “black student union” groups do about their own race. Nevertheless, they have stirred student anger and roused administrators to demand the removal of these webpages. What will happen next?

Obviously, there is racism in America. There are racist people who will do racist things. But the idea that creating a climate of intolerance—of accusations and demands, of forced change based on a skewed view of justice—is going to root out supposedly systemic racism is dangerously wrong. It is leading in precisely the opposite direction.

This is deeply concerning, because—as we have often mentioned at the Trumpet—biblical prophecies warn that race problems in the United States are about to explode. Surely there are some—of several races—who are racist and are being provoked into violence. This situation is going to blow up in all our faces.

In his column, Bret Stephens mentioned that one solution might be to open new colleges according to the model of Hillsdale College in Michigan—a school that accepts no federal money and is thus free from having to enforce the government’s ideological agenda. At this conservative school, he noted, there are no student protests. I’m sure there are many reasons for that. But one must surely be that it teaches respect for law. It offers free classes to the public about the Constitution, teaching about America’s founding principles, law-keeping, separation of powers, and constitutional restrictions on the government.

Any school that teaches respect for law and personal accountability—rather than victim culture and finger-pointing—isn’t going to have nasty protests. Students aren’t going to be whining about how hard they have it. They’re not going to assume that a stray bag of dog waste is evidence of racial hatred.

“That’s why I’m not altogether sorry to see the wave of protests, demands, sit-ins and cave-ins sweeping university campuses from Dartmouth to Princeton to Brandeis to Yale,” Stephens wrote. “What destroys also exposes; what they are trashing was already trashy. It’s time for the rest of the country sit up and take notice.”

Can we look honestly at what is happening here, recognize it for what it is, and take some wisdom from it?