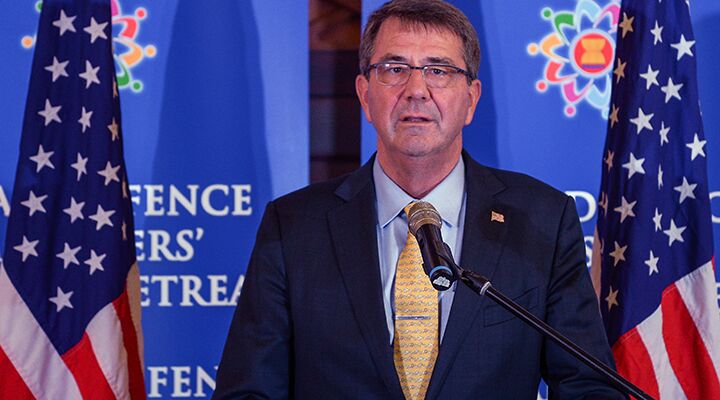 In the last 14 months of President Obama’s term, we could see more and larger pushes from Russia and China against global stability.

Top Pentagon officials are deeply concerned about the increasingly provocative behavior of Russia and China. They say these Asian giants will soon instigate great power battles unless the United States takes bold action in standing up to them. But the Obama administration disagrees with this assessment, and prevents the Pentagon from taking such action.

At the Reagan National Defense Forum on November 7, Pentagon chief Ashton Carter said: “We do not seek to make Russia an enemy. But make no mistake; the United States will defend our interests, our allies, the principled international order, and the positive future it affords us all.”

Those are strong words. And many U.S. leaders have applauded Defense Secretary Carter’s calls for resolute action toward Moscow and Beijing. They see that such action will be necessary to maintain the “principled international order” that Carter spoke of.

But President Barack Obama’s track record shows that he neither agrees with Carter’s assessment nor supports the kind of resolute action Carter is calling for.

This absence of White House support reduces Carter’s warnings to whimsy. It strips his strong words of meaning.

There’s no shortage of examples showing the division between the Pentagon’s desire to take action and the Obama administration’s prevention or hindering of it.

Carter has pushed to send lethal arms to Ukraine in order to stop the Russian invasion. The White House repeatedly overruled those attempts.

Carter says Russia’s military intervention in Syria has had a negative impact on the war-torn region. The White House has said it welcomes the Russian airstrikes as long as they target the right people.

Another worrying example happened in the South China Sea, where China is illegally building and militarizing islands, and asserting ownership of vast swaths of disputed territory. The Pentagon wanted to hold a “freedom of navigation” exercise around the Spratly Islands, wave the American flag, and fly some aircraft to show China that America is strong and will stand up against Beijing’s aggressive and illegal behavior.

But the Pentagon had to wait months before the Obama administration would approve this exercise. And when the administration finally did approve it, it placed so many restrictions on the exercise that, to most onlookers, it didn’t even look like a freedom of navigation exercise.

The National Interest said the ambiguity of the exercise could backfire and translate into a significant victory for China:

Innocent passage may have appealed at a political level in Washington, as less provocative than [freedom of navigation] assertions conducted in the normal operational mode. But labeling U.S. actions around the Spratlys expressly as innocent passage could be handing a legal concession to Beijing. … Introducing a mixed signal now on innocent passage shows extremely poor judgment.

All this ambiguity means that, at the very least, China did not get the message about American resolve and power that the Pentagon wanted to send.

But China and Russia are receiving a different message from America loudly and clearly.

Another particularly worrying aspect of this is that the Chinese and Russian leadership believe that after President Obama leaves office in January 2017, then the situation could drastically change. They imagine that if someone like Donald Trump becomes the next U.S. president, then their season of license would come to an end.

They know they have 14 months until that might happen. That may well mean that in these next 14 months, we could see more and larger pushes from China and Russia against global stability.

For more, read Russia and China in Prophecy.