The recent rash of horrific attacks by Palestinians in Israel is not leading to an independent state—it is leading to Jerusalem being cut in half. 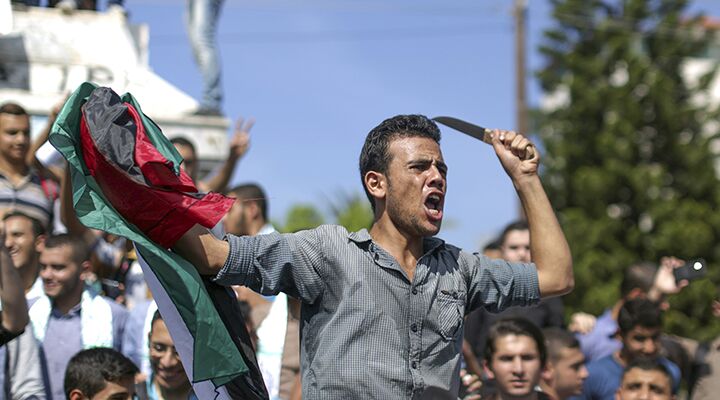 The recent rash of horrific attacks by Palestinians in Israel is not leading to an independent state—it is leading to Jerusalem being cut in half.

You may—or may not—have heard vague reports of more violence breaking out between Palestinians and Jews. But look in detail at the list of attacks and reprisals, just in the first half of October, and it is horrifying.

A husband and wife are shot to death in their car by Palestinians, dying in front of their four children, ages 9, 7, 4 and 4 months. Two men on their way to worship in Jerusalem’s Old City are murdered, and a wife and 2-year-old child are wounded by a knife-wielding Palestinian law student. Palestinians in Gaza fire rockets at Israeli civilians. A young Palestinian man stabs an elderly Israeli woman as she boards a bus. A Palestinian driver rams his car into a bus stop and sends bodies flying, then gets out and hacks a victim with a knife. Two Palestinians board a bus and begin stabbing and shooting passengers, murdering one. Palestinian arsonists attack cars and buildings. Rioters attack police and soldiers.

Palestinian leaders actually encourage these attacks in order to advance their agenda, whipping up violent fervor with lies about “dirty” Israelis planning to allow Jews to pray on the Temple Mount or to just take it over, depending on whom you believe. Then they praise those who have tried to or succeeded in murdering Jews. They even branded it: a “Day of Rage.” Palestinian leaders want their people to go berserk with racist violence.

Meanwhile, one wonders if we are just a “Day of Rage” or two away from another bloody intifada, where Palestinians go all-out and strap explosives and ball bearings to themselves, then search out people on buses or families at cafés that they can murder en masse.

The nation with the world’s largest economy, military and, formerly, political influence has an opportunity to help. What does it do? The United States Department of State responded to these terrorist attacks on Israeli citizens with this: “We remain deeply concerned about escalating tensions and urge all sides to take affirmative steps to restore calm and prevent actions that would further escalate tensions.” In other words, the Palestinians must tone down the violence—and so must the Jews!

Associated Press reporter Matt Lee noticed the State Department’s veiled condemnation of Israel. He quizzed State Department spokesman Mark Toner about it: “Does the [Obama] administration believe that Israel is inciting or not condemning violence?”

“[W]hat we’ve been very clear about saying is that we want to see both sides take affirmative steps, affirmative actions that reduce tensions in the region,” Toner said. He acknowledged the horrific attacks against Israelis but added, “[W]e’ve seen also attacks on Palestinians, [investigations for which] remain ongoing.”

Yes, outraged Israeli settlers have burned olive trees and beaten Palestinians. Yes, Palestinian bystanders have been killed as Israeli police, troops and airmen have conducted raids and strikes against Palestinian terrorists (who not only target Jewish civilians, but also hide among and behind Palestinian civilians). But why is the State Department equating that with a man who plows his car into people at a bus stop, or a child who stabs away at another child, or terrorists who aim their rockets at civilian areas, or murderers who shoot unsuspecting parents to death in front of their young children?

Lee then asked what the United States expects from the Israelis to reduce the violence in Israel. Toner responded that they should “[uphold] the status quo in Haram al-Sharif and [the] Temple Mount.” That is exactly what the Israelis have been doing for decades. By emphasizing it, the State Department was responding to, legitimizing and perpetuating a lie from Arab propaganda: that Jews are plotting to desecrate Muslim holy sites and to blow up mosques.

Chief among those Arab propagandists is Palestinian Authority President Mahmoud Abbas. He lied before the United Nations General Assembly about Israel sending Jewish extremists into the al-Aqsa Mosque and said this on September 16 during a speech on Palestinian tv: “[W]e bless every drop of blood spilled for Jerusalem. With the help of Allah, every martyr will be in heaven. … Al-Aqsa is ours and so is the Church of the Holy Sepulcher. [Jews] have no right to desecrate them with their filthy feet. We will not allow them to, and we will do everything in our power to protect Jerusalem.”

Israel has consistently upheld a decades-old policy of protecting and preserving all holy sites in Israel—whether they are Jewish, Christian or Muslim. Contrary to insinuations by the State Department (not to mention Palestinian terrorists), Israel has upheld that status quo since 1967, when it took control of East Jerusalem and the Temple Mount.

But that fact is lost on—or ignored by—the Obama administration. Secretary of State John Kerry similarly attributed the violence in Jerusalem to Israeli policies, saying, “[U]nless we get going, a two-state solution could conceivably be stolen from everybody. [T]here’s been a massive increase in settlements over the course of the last years. Now you have this violence because there’s a frustration that is growing ….”

Secretary Kerry would have you believe that Palestinians are lashing out in violent terrorist acts because they are frustrated at the stalled peace process! They just want a state so they can live peacefully alongside Israel.

Israeli Prime Minster Benjamin Netanyahu’s statement is more in line with the visible, horrifying facts. “Terror,” he said, “comes from the desire to annihilate us.”

Commentary’s Jonathan Tobin wrote, “While the narrative about this latest outbreak of violence from critics of Israel is that it is all about the sins of the ‘occupation’ and Israel denying hope to the Palestinians, what we are hearing from them is a very different story. Read any of the accounts of the motivations of the people going into the streets to stab random Jews they encounter or the mobs in the West Bank who are seeking to set off confrontations with Israeli troops, and you don’t hear much about frustration about the peace process. … What you do see are accounts of Muslim religious fervor that is drenched in the fever of martyrdom and faith-based hate” (October 12).

The Palestinians themselves have called this uprising the “hibat al-Quds”—the “Jerusalem awakening.” The terror is coming as a response to a false conspiracy about a Jewish takeover of Muslim holy sites. At its core, it is a religious war based on hatred of the Jews!

International coverage has been muted if not outright biased. It has primarily focused on the number of deaths on either side of the conflict, or on the “disproportionate” Israeli response. But what proportion do you use, exactly, when people are inspiring their children to pick up a knife and go after your children?

Even after 150 terrorist attacks within 48 hours, “somehow the international community is silent in the face of this terror onslaught against my people,” Arsen Ostrovsky, a Jewish human rights lawyer, wrote. “Is our blood cheaper? Do Jewish lives not matter? Let there be no mistakes, ifs, buts or maybes. We are being targeted for one reason and one reason only: We are Jews” (Telegraph, October 9).

Can anyone argue that he’s wrong?

Like every other race, the Jewish race matters. Yet it has suffered unusually virulent hatred perhaps more than any other. Why have the Jews been hated for centuries—in the Middle Ages, at the hands of the Catholic Church, by the Spanish, by the Russians, by the Arabs, even by many Americans and British. Why did Nazi Germany operate an enormous machine solely to murder Jews?”Where is all of this hate coming from?” Trumpet editor in chief Gerald Flurry asks in his booklet The Key of David. “A thinking person has to wonder! We know the Jews, like all humans, have helped to create some of their own problems. But we must see that there is something deeper behind anti-Semitism.”

Do Jewish lives not matter? We are being targeted for one reason and one reason only: We are Jews.
Arsen Ostrovsky

God is not a respecter of persons or races (Romans 2:10-11; Acts 10:34). But the Bible clearly reveals that God chose a race of people and gave them a job to do. Prominent among those people are the Jews. God is using the Jews (Romans 2:28-29). Not to give them special, unfair favors, but to benefit all of mankind. That booklet explains how (and we will gladly send you a free copy upon request).

Who would hate something like that? The very real, very active Satan the devil.

Wouldn’t you describe a 13-year-old Palestinian trying to murder another 13-year-old simply because he is Jewish as satanic?

Satan hates God, hates His plan, and hates the people He commissioned. He inspires anti-Semitism. And he wants that hatred to explode.

Israel’s Central Bureau of Statistics says the country now has a shortage of private security guards because of increased demand. And those guards are now officially approved by the Economy Ministry to work overtime.

The Israeli government has put more police and soldiers onto the streets. It has deployed soldiers to Jerusalem, a very rare occurrence. It has taken the major step of setting up checkpoints in East Jerusalem and reportedly may close those routes completely. Soldiers are guarding buses. Troops are on the streets. Palestinian areas are being partially blocked off.

What is this leading to?

The Israelis don’t know. The Palestinians don’t know. The media don’t know. But the Bible reveals where this is heading. We are about to see Jerusalem split down ethnic lines between east and west! These are the early stages of that division.

The more you scrutinize Bible prophecy, the more you realize how timely and accurate it is about the situation in Jerusalem.

The violent trend we see today is leading to the fulfillment of a critical and surprisingly specific prophecy in Zechariah 14:1-2: “Behold, the day of the Lord cometh, and thy spoil shall be divided in the midst of thee. For I will gather all nations against Jerusalem to battle; and the city shall be taken, and the houses rifled, and the women ravished; and half of the city shall go forth into captivity, and the residue of the people shall not be cut off from the city.”

The Trumpet has publicized this prophesied development for years. When there were flare-ups between Israel and Hezbollah in the north, and then between Gaza and Israel in the south, Gerald Flurry explained that the West Bank would be next, and finally, Jerusalem. “We will see [the] prophecy in Zechariah 14:1-2 fulfilled very soon,” his booklet Jerusalem in Prophecy explains.

Studying that prophecy in combination with several others, you see that this event will plunge the Jewish state and many other nations into a crisis more horrifying than the Holocaust. It will be a tragic period when Jewish lives won’t matter.

But there is hope for Jerusalem. While the time ahead “will involve some sickening atrocities and bloodshed,” that booklet continues, “it is directly connected to the greatest news this world has ever heard!” In the same way that the Bible was right about the events we see exploding in Israel, the Bible is right that they are leading to the return of Jesus Christ to Earth—to Jerusalem!

Christ will end the days of people viewing those of another race with hatred and contempt. Because of Christ’s coming rule—and only because of that—the “Days of Rage” in Jerusalem are about to become days of peace.