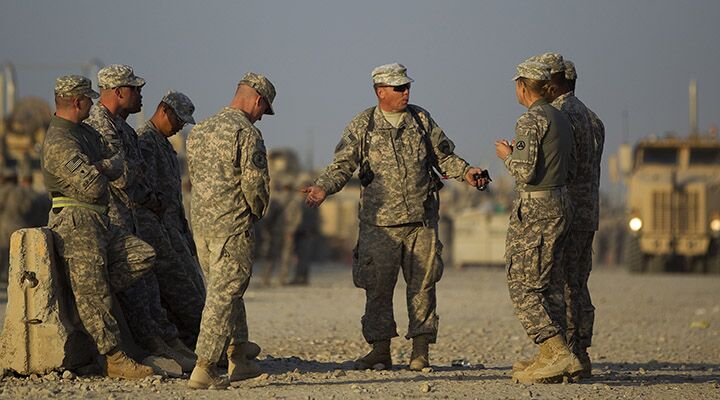 God foretold America’s startling reluctance to use its power for good in this end time. As a result, Gentile powers will launch this world into the war that will end all wars.

Iranian Gen. Qassem Suleimani is now free to leave his own country. As part of the worst foreign policy deal America ever made, the United States lifted sanctions that had confined him to Iran. This man killed 1,500 American soldiers, but now he can do as he pleases.

And what’s the first thing he did after sanctions were lifted? He flew to Russia to buy intercontinental ballistic missiles (icbms). Iran may now purchase icbms due to the nuclear deal that also gave the world’s largest state sponsor of terrorism $150 billion. Iran has already violated more than 20 agreements made with nuclear inspectors, yet somehow the negotiators of the nuclear deal believe it will delay the nations acquisition of the bomb by 13 years.

But Iran is clearly in a big hurry to go nuclear. And America is making its journey to the bomb an easy one.

‘I Will Break the Pride of Your Power’

God blames the people—not any political party—for what is happening in America, Britain and the Jewish state in the Middle East.

“And I will set my face against you, and ye shall be slain before your enemies: they that hate you shall reign over you; and ye shall flee when none pursueth you. And if ye will not yet for all this hearken unto me, then I will punish you seven times more for your sins. And I will break the pride of your power …” (Leviticus 26:17-19).

General Suleimani said on September 1 that the collapse of American power in the Middle East has happened! That nuclear deal equates to an American surrender—our leaders didn’t even demand the release of four Americans unjustly imprisoned in Iran. God has taken away America’s will to use its unmatched might. As a result, unsolvable problems are crashing down upon this once great country.

“But thou, O Daniel, shut up the words, and seal the book, even to the time of the end: many shall run to and fro, and knowledge shall be increased. … And he said, Go thy way, Daniel: for the words are closed up and sealed till the time of the end” (Daniel 12:4, 9). The book of Daniel is exclusively for this end time. We ought to pay special attention to what it says.

Daniel 9:10-14 give proof that the punishment described in Leviticus is coming on our people today:

Neither have we obeyed the voice of the Lord our God, to walk in his laws, which he set before us by his servants the prophets. Yea, all Israel have transgressed thy law, even by departing, that they might not obey thy voice; therefore the curse is poured upon us, and the oath that is written in the law of Moses the servant of God, because we have sinned against him. And he hath confirmed his words, which he spake against us, and against our judges that judged us, by bringing upon us a great evil: for under the whole heaven hath not been done as hath been done upon Jerusalem. As it is written in the law of Moses, all this evil is come upon us: yet made we not our prayer before the Lord our God, that we might turn from our iniquities, and understand thy truth. Therefore hath the Lord watched upon the evil, and brought it upon us: for the Lord our God is righteous in all his works which he doeth: for we obeyed not his voice.

Jerusalem was the capital of ancient Israel and is a type of all Israel today. Notice the phrase “written in the law of Moses,” which occurs twice in this passage. Moses wrote the Pentateuch, or the first five books of the Bible—including Leviticus and its curse against Israel. The blame for this indescribable suffering falls squarely on the people. But how many people believe their own Bibles?

“Make a chain: for the land is full of bloody crimes, and the city is full of violence” (Ezekiel 7:23). Violence is exploding in America, and a big reason is our drug addiction. According to the U.S. News and World Report, the number of U.S. casualties caused by heroin increased 286 percent between 2002 and 2013. Drug cartels and gangs know this is a crippling weakness with a huge financial upside, and they are coming through our southern border to fight for customers!

There is no nuclear power like Iran. It believes it can hasten the return of its messiah by increasing violence. Despite the rise of the Islamic State, Iran is still the dominant power in the Middle East. Imagine the nightmare it will be with nuclear bombs.The nuclear deal is a massive disaster! We trust Iran even though it lies as a way of life.

A senior Iranian military official recently vowed to set fire to all U.S. interests in the Middle East. He said Iran welcomes war with America! This is the thanks we get for giving it everything it wanted in the nuclear deal. How can we rejoice over a nuclear deal that has changed nothing?

Nuclear powers absolutely would extinguish all life on the planet if Christ did not intervene (Matthew 24:21-22). The Islamic State is now trying to convince the Muslim Brotherhood in Egypt to declare allegiance. This would make Egypt a destabilized tinderbox. The Islamic State is also popular in the Balochistan province of Pakistan, the epicenter of the nation’s prolific nuclear production. What if it got its hands on a nuclear arsenal that currently grows four times faster than India’s and could be the third-largest stockpile in the world in five or 10 years?

As the main threat to Iran, the Islamic State only makes Iran pursue the bomb more urgently. It will not allow the Islamic State to possess nukes first. The Islamic State already has mustard-gas agents, and Syria has chemical weapons. This volatile region—mainly Iran—will provide the spark for the explosion of World War iii!

This volatile region—mainly Iran—will provide the spark for the explosion of World War iii!
Many authorities also point to America’s withdrawal from Iraq as the reason for the European refugee crisis. When America left, the Islamic State started a war in Syria and moved into Iraq, forcing millions to flee their homes for Europe. Most of them are Muslims, and they are heading to Germany. Germany is set to absorb 800,000 migrants and is quickly realizing that the flow of refugees can’t be controlled. It is building up its military to stop smuggler ships from dropping off any more.

Germany is known for starting World War i and World War ii, and it is prophesied to turn to the dark side one last time. As the seventh resurrection of the Holy Roman Empire, it will rise up and crush Iran (Daniel 11:40). The king of the north, led by Germany, and the king of the south, radical Islam led by Iran, are on a collision course for the war to end all wars! Presently, the German people only lack a strong man to lead them into battle (Daniel 8:23).

“And at that time shall Michael stand up, the great prince which standeth for the children of thy people: and there shall be a time of trouble, such as never was since there was a nation even to that same time: and at that time thy people shall be delivered, every one that shall be found written in the book” (Daniel 12:1).

Nuclear war is imminent. But God says He will protect and deliver His people who are doing His work. “And they that be wise shall shine as the brightness of the firmament; and they that turn many to righteousness as the stars for ever and ever” (verse 3). What a wonderful promise! The plethora of bad news leads directly to the Second Coming of Jesus Christ!