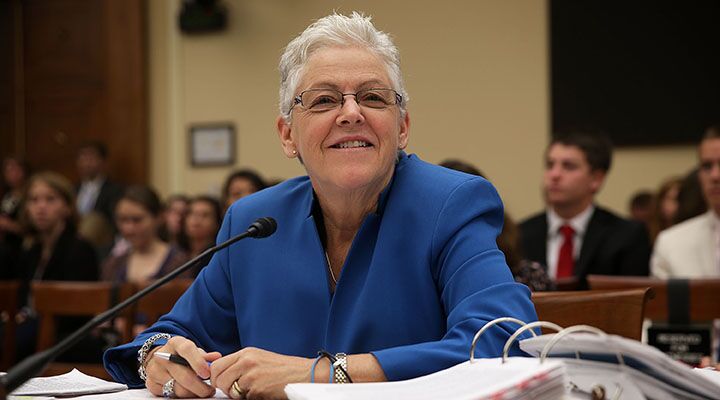 The Environmental Protection agency is using the Navigable Waters Act to amass an astounding amount of federal power. It is part of a dangerous trend in America.

People care about clean water. In a divided country, it is an issue that bridges party lines. So it is refreshing to see so many Republicans and Democrats working together to safeguard America. Sadly, their fight is against the chief office in the land and the very agency that is supposed to protect America’s water.

And it is not clear who will ultimately swim or sink.

According to the Environmental Protection Agency (epa), its actions are necessary to protect people. It says that the Navigable Waters Act gives it the authority to protect America’s transport waterways. It is a principle held up by the courts.

But now it says it has reinterpreted the act and found out that it actually has a far greater jurisdiction than it realized. Not only does it have authority over bodies of water that are large enough to transport goods by boat, but it has the authority to regulate the streams, ditches, gullies, swamps and even seasonal waters that potentially feed into any navigable waterway—plus 4,000 feet of land in any direction from any such culvert, wash, arroyo, mudflat or seasonal marsh.

That’s a lot of territory. Hundreds of millions of acres.

Yet not everybody is happy. PacificLegal.org calls it “undoubtedly the largest expansion of power ever proposed by a federal agency.”

The American Farm Bureau Federation says that the epa power grab puts 99 percent of Pennsylvania and Montana, and 100 percent of Virginia under the federal agency’s authority. Vast oceans of other states fall under the epa’s claim of domain too.

Suddenly, and without congressional input, the epa has placed the majority of the rivers and farmland in the United States under its regulatory control. The epa is “radically” expanding its jurisdiction over land use, says the Federation.

But don’t worry: To allay concerns of federal overreach, the epa has specifically stated that “puddles” will not fall under its new authority.

And oh, “most ditches” won’t be regulated either.

The epa has become a “threat” to communities, as opposed to a servant, Sen. James Lankford of Oklahoma told the Edmond Business Chamber of Commerce on August 27. “They are taking 40-year-old laws and reinterpreting them in a way no president has ever done.”

Going from navigable waters to puddles—and the epa has the gumption to post on its “fact” page that the change “does not” affect “waters that have not historically been covered by the Clean Water Act.”

“The rule does not protect any new types of waters,” the agency repeats. It just “provides greater clarity.”

Change? What change? There’s no change.

Of course there was a change. You don’t announce new rules if there is no change.

Federal Judge Ralph Erickson certainly thought there was a change when he ruled against the epa on August 27.

He found that “the epa has violated its congressional grant of authority in its promulgation of the rule at issue and … it appears likely the epa failed to comply with [Administrative Procedure Act] requirements when promulgating the rule.”

Judge Erickson also found that the states “have demonstrated that they will face irreparable harm in the absence of a preliminary injunction. Once the rule takes effect, the states will lose their sovereignty over intrastate waters that will then be subject to the scope of the Clean Water Act” (emphasis added throughout).

But notice how The Hill characterized the response of the Obama administration. “In a statement shortly after the ruling, theepa was defiant and said that the injunction only applies in the 13 states that filed for it.” “In all other respects, the rule is effective on August 28,” it says.

It believes it is above the law.

Both Congress and the Senate have passed legislation to stop the epa power grab. But President Barack Obama has said he will veto any attempt to stop the epa.

Who cares what the people say!

The epa claims to be pushing through its new rule because it’s what the people need and what the people want. Yet, as even the leftist group ThinkProgress.org notes, it is a diverse and vast coalition of business groups, farmers’ groups, real-estate groups, natural resource companies, golf course operators, Republicans and Democrats, along with the traditional fossil fuel interests, that oppose the epa. That’s “what’s so different” about this backlash, which “seems almost universal.”

The opposition is almost universal, yet the epa says it will do it anyway because what it is doing is by popular demand.

Senator Lankford says this is a lie too.

The epa claims it has had an extensive comment period. It says it has read over 1 million public comments, of which 90 percent support its new plan.

Senator Lankford describes the epa’s outreach process: The epa sent press releases announcing a comment period for the proposed rules to the Sierra Club and other extreme environmental groups, which was essentially a call out for comments. It is these comments from these leftist groups that it claims give it its mandate.

He continues: The epa won’t even release the science behind the regulations it is trying to force on the whole nation. It says it is proprietary. It says, “Just trust us.” With this kind of reasoning, it can do whatever it wants, he said.

Herbert W. Armstrong described exactly the situation America is in today in his booklet The Wonderful World Tomorrow—What It Will Be Like.

Today, as in ancient times, too many of those who seek offices of power over the people of cities, states, districts or nations promise great benefits, pose as public benefactors, while their inner motives are ambitions for personal power and wealth. … But actually too often what we find is selfish, greedy men of excessive vanity, ambitious in their lust for rule, scheming to get their hands on the throttle of power for personal aggrandizement and monetary gain.

The epa has become a tool of politics. Instead of enforcing laws created for the people and by the people via Congress, it is showing itself to be an activist arm of far-left environmentalist groups. Its hallways are increasingly staffed with campaigners as opposed to scientists.

As epa administer Gina McCarthy said after her appointment by President Obama, “I will tell you that I didn’t go to Washington to sit around and wait for congressional action. Never done that before, and don’t plan to in the future.”

This kind of lawless behavior is taking America in a very dangerous direction.

“Governments promise peace—but bring wars,” noted Mr. Armstrong. “They promise benefits for the people, and then extract from the people the cost of the benefits plus excessive costs of government. Government promises are empty. The people are the pawns who fork over the money in order to get a part of it back.”

“Now is high time to awake out of sleep,” said Stephen Flurry on Trumpet Daily Radio Show on Tuesday, as he quoted the Apostle Paul: “The spirit of slumber is strong.”

Big government, bad government, activist government, dictatorial government is steaming full speed ahead—and if you don’t wake up, you will get dragged behind it and drowned.

To understand why America is losing so many of its freedoms, read America Under Attack.