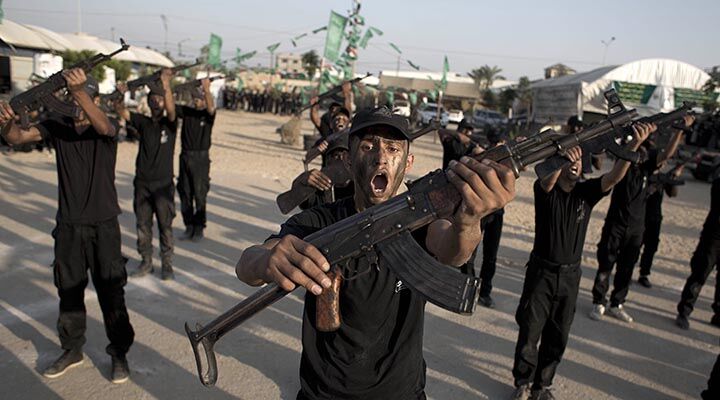 Hamas and Iran’s deteriorating alliance is fulfilling prophecy from Psalm 83.

Hamas has been firmly in Iran’s camp for more than 20 years. But that relationship is slowly deteriorating and giving way to an improving relationship between Hamas and Iran’s regional opponent: Saudi Arabia.

Hamas is the Sunni terrorist organization that controls the Gaza Strip. It constantly wages wars with Israel—almost every summer, it seems. It has a murderous penchant for launching missiles at towns and cities in Israel.

Hamas owes its continued existence to Iran. The Islamic Republic has armed, trained and funded Hamas—to the tune of tens of millions of dollars every year.

Hamas’s benefit to Iran is that in Hamas, Iran has an ally right on the doorstep of Israel, its greatest enemy. Hamas is a major instrument of Iran’s foreign policy, together with Syria’s Bashar Assad and Lebanon’s Hezbollah. Hamas gives Iran the means of projecting power in the Levant and the envied ability to threaten the Jewish state.

Hamas’s importance to Iran makes the apparent break in this strategic alliance remarkable.

But what’s more remarkable is Trumpet editor in chief Gerald Flurry’s forecast about the break in that relationship—in 2012!

Mr. Flurry based that projection on a prophecy in the book of Psalms about the “moderate,” predominantly Sunni Arab states forming a confederation of nations, which will be allied with Germany. He wrote:

This prophecy in Psalm 83 reveals a tremendous amount about what we can expect to see in the time ahead—including some dramatic changes!Gebal, modern-day Lebanon, is home today to the Iranian terrorist puppet Hezbollah. We can expect it to … switch allegiance!This prophecy also reveals that the Philistines are with the inhabitants of Tyre. Get a map and you will see that Tyre is in southern Lebanon, the stronghold of the Hezbollah terrorists. Their alliance with Iran is about to be broken, and Germany will be the main cause.The Philistines—or the Palestinians of Gaza and even those in the West Bank—are going to shift their alliance to Germany as well.Iran has recently led Hezbollah and the Palestinians in their terrorist activities. They all share some common enemies—especially America and Israel. But they have some different views in religion and politics, which could cause Hezbollah and the Palestinians to ally themselves with Germany.[T]here may soon be some significant power shifts in Lebanon and Gaza.

When Mr. Flurry wrote that in 2012, there was very little evidence of a split in the relationship between Iran and Hezbollah, and between Iran and Hamas. In fact, it seemed outlandish that Hamas or the Palestinians in Gaza would move away from Iran and align themselves with the nations of the Psalm 83 alliance.

At that time, Iran was giving Hamas millions of dollars every year. It was smuggling truckloads of weapons into the Gaza Strip via tunnels under the Egyptian border. Even as recently as Hamas’s missile assault on Israel last summer, Iran staunchly supported its Gazan proxy.

But look at what has been happening lately.

“After years of alignment with Shiite Iran and its Arab allies,” wrote the Times of Israel on July 21, “the Palestinian Hamas group is bidding for Sunni patronage from Saudi Arabia in a dramatic shift to its geostrategic orientation.”

A high-level Hamas delegation headed by the group’s politburo chief, Khaled Mashaal, visited Riyadh [July 17] to meet with King Salman, Crown Prince Muhammad bin Nayef, and a host of Saudi officials. The makeup of Hamas’s team was noteworthy, as it included Mashaal’s deputy, Moussa Abu Marzouk, and Saleh al-Arouri, the movement’s Turkey-based official suspected of guiding recently exposed terror cells in the West Bank, as well as the abduction-killing of three Israeli teenagers last summer. Arab media rushed to note that it was the first such meeting in over three years. …The sudden, overt rapprochement between revolutionary Hamas and conservative Saudi Arabia—both followers of Sunni Islam—is unsurprising given the gradual decline in Hamas’s relations with Iran in recent years.

Hamas’s ultimate purpose, however, has not changed. One of the group’s leaders wrote on Facebook that “Hamas’s compass will remain directed to Jerusalem, with the liberation of Palestine the basis of its strategy.”

But Hamas’s meeting with Saudi officials infuriated the mullahs in Iran. News outlets in Iran launched scathing attacks on Hamas for what they regarded as Hamas’s treachery against Iran. The Times explained:

Hamas’s public appeal for American favor does not please Iran, Hamas’s former benefactor. The Islamic Republic would not accept Abu Marzouk’s attempt to pacify everyone, indicating that Hamas’s shift toward Saudi Arabia means a cut with Iran. “Hamas takes a step toward Riyadh and two steps away from Tehran,” read the headline of pro-Hezbollah—and, by extension, pro-Iran—Lebanese daily al-Akhbar on [July 19].

Reuters observed that “Saudi King Salman’s meeting on [July 17] with Hamas leader Khaled Mashaal was part of an effort by Riyadh to shore up Arab unity in the face of a perceived threat from Iran that it believes has become more urgent since last week’s nuclear deal.”

A lot of this is happening in the wake of and in response to America essentially giving Iran nuclear weapons. It’s happening because America is emboldening Iran politically and giving it legitimacy in the Middle East. The U.S. is also helping Iran financially by easing sanctions.

Saudi Arabia is understandably concerned about these developments. The Sunni kingdom is looking around at the Middle East, and even globally, and it’s considering its options for countering Iran. Saudi Arabia sees an opportunity with Hamas in Gaza. It knows that if it can pry Hamas away from Iran, then Tehran loses major leverage—it loses one of its key assets in the Middle East.

Reuters continued: “Saudi Arabia, a conservative Sunni Muslim monarchy, has grown more aggressive this year in countering Shiite, revolutionary Iran across the region, believing its influence to be the main cause of instability and insecurity in Arab states.”

Mustafa Alani, an Iraqi analyst close to the Saudi Interior Ministry, was quoted by Reuters as saying, “It’s part of the grand strategy of countering Iranian influence. It’s the main issue for Saudi Arabia, and it’s more urgent after the nuclear deal.”

Iran has completely cut off its financial aid to the Palestinian militant group Hamas, a senior Hamas official claimed on [July 27], according to Israeli media reports. …Iran’s elite Revolutionary Guard has transferred millions of dollars to the Palestinian group’s military wing, the Izz al-Din al-Qassam brigades, within the last year to finance Gaza’s tunnel network and replenish rocket caches used against Israel during last summer’s conflict, according to Western officials. However, Hamas’s politburo chief Moussa Abu Marzouk, who is believed to currently reside in exile in Egypt, has now claimed that Iran’s financial backing has dried up.”All assistance has stopped—both civilian aid to the Gaza Strip and military assistance to Hamas,” he was quoted as saying in an interview with Al Jazeera by a number of Israeli media outlets. “[Iran] greatly helped the resistance in Palestine; without this assistance it will be hard for us to cope.””The relations between Hamas and Iran are not advancing in a direction in which the organization (Hamas) is interested and aren’t improving to the degree the organization wants in order to help the Palestinian issue,” the official added.

“Keep not thou silence, O God: hold not thy peace, and be not still, O God. For, lo, thine enemies make a tumult: and they that hate thee have lifted up the head. They have taken crafty counsel against thy people, and consulted against thy hidden ones” (Psalm 83:1-3).

This prophecy then lists which peoples comprise the alliance: “The tabernacles of Edom, and the Ishmaelites; of Moab, and the Hagarenes; Gebal, and Ammon, and Amalek; the Philistines with the inhabitants of Tyre; Assur also is joined with them: they have holpen the children of Lot. Selah” (verses 6-8).

If you study Bible history, you can identify the modern descendants of the Psalm 83 nations. The modern-day descendent of Edom is Turkey. The Ishmaelites are the Saudi Arabians. Moab and Ammon make up modern Jordan. The Hagarenes can be found in Syria. The Philistines anciently inhabited the region of southern Israel that is called Gaza today. Gebal is Lebanon, and Tyre is the area of southern Lebanon. Assur is Germany.

The Middle Eastern nations in this alliance are commonly referred to as the “moderate” Arab nations. But that’s a misnomer—they are anything but moderate in their hatred for America, Britain and the Jewish state.

Today, these Arab nations appear moderate because of they oppose Iran and the Islamic State and because they have close trade relations with the West. But the Bible says these countries are dangerous and filled with hatred for the West. Iran is not the only dangerous anti-Western nation in the Middle East — these Psalm 83 alliance counties will eventually become hostile to Western interests too!

These verses foretell a massive shift in alliances among the nations of the Middle East! Events are about to stagger the imagination of many authorities in this world! And God prophesied it all thousands of years ago.Should we believe in the Old Testament? We should if we want to understand end-time Bible prophecy. The Psalms is the only book in the Bible that contains this prophecy. Without Psalm 83, there would be no way to understand these particular events until well after they had snapped into place.This is a most exciting and wonderful prophecy—yet the world understands almost nothing about it. People should understand, because this message has been publicized for them to see for about 70 years by the Trumpet and by Herbert W. Armstrong!

Ultimately, this prophecy is exciting because of the good news that comes after it. It’s a prophecy that will continue to be fulfilled over the next few weeks and months—right before our eyes!