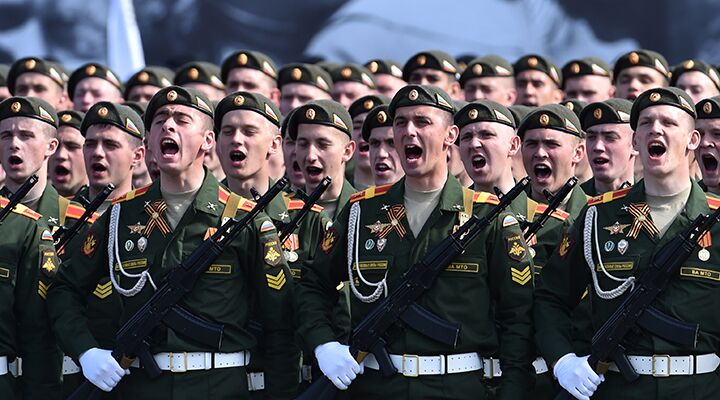 You can learn about Russia and the United States by looking at the public’s view of their armed forces.

The first half of each of those sentences reflects the way the people of Russia increasingly see their county’s military—noble, fierce and worthy of high praise. The second half of each reflects the view many Americans have toward the United States military.

This dichotomy between the two reveals a great deal about each nation.

‘The Best of Militaries’

Among the people of Russia, military enthusiasm is reaching a fever pitch—especially among the young. The Riga-based Meduza reported on July 16 that “[s]upport for the Army and the desire to serve the nation have reached an all-time high in Russia.”

This means that the military is able to accept only the crème de la crème—or the borscht of the borscht, as the case may be. They can accept just the very best applicants.

Meduza says the main tool the Russian government uses to prepare “young Russians to give their lives for the motherland” is a system of “[m]ilitary-patriotic education of the population.” This begins as early as age 5 for many Russians. It entails participation in state-run clubs and programs. Meduza explains:

Russians are sending their children to military-patriotic clubs which get boys and girls ready for military service, teach them to love their country and to fight for it, using a rich variety of weapons. … The kids are taught by a mixed martial arts coach to fight, to handle weapons, and to survive under difficult conditions. The aim is to prepare them for service in the Russian Army ….

There are many different types of clubs and programs, but Meduza says all are underpinned by a common goal:

They are all similar: They accept girls and boys into their ranks up until the age of 18, teach them military exercises, take them camping in the woods, teach them to use weapons, go on parachute jumps, and some clubs even offer special exercises using training versions of heavy military equipment. Their websites usually feature pictures of kids in camouflage and military paint holding Kalashnikovs in their hands. The organizers of these clubs maintain that they’re not simply preparing children for the Army.

One club’s website says: “The real warrior is not one who knows how to fight or aim a weapon, but one who is ready to sacrifice themselves for defending their faith, their motherland or their loved ones.”

It is not difficult to see why so many Russian youth are drawn to these programs. And it is not hard to see why the Russian populace is so staunch in its support of the nation’s military.

This zeal of Russians for their armed forces is not likely to diminish anytime soon. Beginning next year, the Russian government plans to double down on these programs, greatly boosting their funding and emphasis. The new initiative will see children begin to participate before they reach their first birthday.

The current arrangement came into effect in 2010, but the Ministry of Defense is preparing a new plan for 2016-2020. … The program states that work with children must begin immediately after their birth. Between ages 0 and 6, the state is supposed to “help the child in forming the correct understanding of the greater and lesser motherland, as well as in forming a basic system of spiritual values of love, kindness, labor, friendship and honesty.” Military-patriotic and military-sporting clubs will be key for achieving these goals.

This trend provides insight into what is fueling Russia’s resurgence. The stratospheric zeal the Russians have for their military is soaring on a trajectory that parallels their support for Russian President Vladimir Putin. Despite economic suffering, the Russian populace totally backs Putin as he steers Russia toward expanding its territory and power. This is because Mr. Putin is tapping into national pride that is abundant among the Russian people. He is harnessing the deep-seated belief among many that they are misunderstood by Westerners, and not sufficiently respected.

It shows that the people of Russia want to do their part in helping Putin restore Russia’s standing. They are ready to fight and to die to help him usher in a new era of Russian dominance.

The Russian trend is also significant because of how it contrasts with the view the American people have of the U.S. military. According to a recent Gallup poll, a minority of Americans say they would be willing to fight for the U.S. if it was attacked. This was well below both the global average and the Russian percentage.

For Americans, that number is falling all the time. As political infighting keeps dividing Americans—and subdividing and subdividing them—the people are losing pride in the country. They see it as a divided house, and are not willing to risk their lives to support it.

This dwindling American pride is reflected in the U.S. military.

Not long ago, the American military was basically forced to accept anyone who would walk through its doors to enlist. Recruitment standards were set lower and lower so that more people from the dwindling pool of applicants could be accepted. The military issued all kinds of waivers to applicants for misconduct and health issues. That’s all because so few Americans wanted to enlist.

This year, many more young Americans will study in other nations than will enlist in the armed forces.
At present, the U.S. forces are again turning more applicants away, but it’s not because more and higher quality applicants are enthusiastic about enlisting. It’s mostly because the government is working to shrink the size of the military, especially the Army.

This year, many more young Americans will study in other nations than will enlist in the armed forces. Almost 300,000 will study abroad, while well under 200,000 will join the military. And the trend seems to be steadily heading in that direction.

Alongside that, the American public is less enthusiastic about the military. Americans support the troops and respect their sacrifice, but as for the military and its endless campaigns, they don’t take it seriously. They are not really behind it.

Earlier this year, James Fallows wrote about it in the Atlantic: “[Americans have a] reverent but disengaged attitude toward the military—we love the troops, but we’d rather not think about them …. Outsiders treat it both too reverently and too cavalierly, as if regarding its members as heroes makes up for committing them to unending, unwinnable missions and denying them anything like the political mindshare we give to other major public undertakings ….”

Americans believe in the troops but far less in the campaigns. The country’s foreign policy often handcuffs soldiers, issuing orders that lead to anything but victory. This demoralizes troops and perpetuates public ambivalence. In terms of power, there is no question that U.S. forces are unmatched. But without a will to use it, power becomes irrelevant.

This tale of two militaries—intensifying Russian zeal for the motherland and military, alongside an increasing American fatigue about U.S. armed forces—shows that the curtain is closing on the era of U.S. global dominance. It indicates that, in the next scene, Russia will be positioned to play a lead role.

To understand the significance of the impending scene change, read “What Happens After a Superpower Dies.”