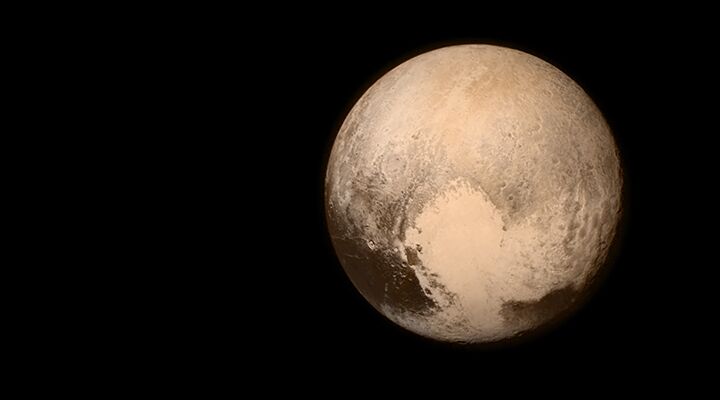 A scientific achievement that radiates inspiration

From the September 2015 Trumpet Print Edition

It’s remarkable, this marvelous curiosity humankind has about the universe. We want to know what’s out there. But we don’t just imagine it in Hollywood blockbusters—we spend billions of hours and dollars meticulously building probes and launching them into that inky ocean of space.

We know so little. For half a century mankind has been sending spacecraft to explore our solar system. One by one, we have gotten spectacular close-ups of our neighboring planets. Each probe has yielded unexpected discoveries—river valleys on Mars; volcanic moons around Jupiter.

Pluto is the most unknown of them all. Our knowledge about it could fit on a postcard.

That is what motivated scientists to send a probe to check it out. They built it small—grand piano-size; fast—able to cruise a million miles a day; and efficient—requiring only 170 pounds of fuel to journey 3 billion miles. They loaded it with a suite of sophisticated reconnaissance instruments to gather all the data possible during a fleeting flyby.

Reaching its destination required the beauty of a perfectly timed 80-yard touchdown pass—on a cosmic scale. A quarterback throws not to where his receiver is, but to where his outstretched hands will be by the time the football finishes its flight path. Scientists had to determine how physical forces would operate on this probe over the course of nearly a decade, map its precise route and speed, and calculate how to align it exactly with those of this distant dwarf planet.

Factored into their computations was a nifty slingshot assist from the gas giant Jupiter. Moving through Jovian airspace, the spacecraft harvested four months’ worth of observations about our solar system’s largest planet—while using Jupiter’s gravitational pull to pick up 9,000 miles per hour. That trick shaved three years off New Horizons’ trip to Pluto.

After passing Jupiter, New Horizons went into hibernation for about 10 months out of each year to conserve energy. Even as this lonely robot scooted farther from home, scientists still monitored its systems, updated software, resolved computer glitches, and made course corrections.

On July 14, after 3,463 days, the touchdown pass was finally completed—a graceful rendezvous between a dwarf planet that had moved 874 million miles along its orbital path, and a probe that had traveled 3 billion miles to visit it.

The scientists nailed it. After nearly 500 weeks, New Horizons passed Pluto within a phenomenal 72 seconds and 43 miles of its targeted course. It sped 7,750 miles above Pluto’s surface at 10 miles a second, recording all it possibly could. The data trove it captured was so vast, it will take 16 months to download it all.

What an achievement. What a testament, too, of the precision of our predictable, ordered universe, which operates in perfect accordance with laws of physics. Throughout the universe is fantastic, abundant evidence of an almighty Lawgiver, and a highly skilled Designer and Creator (e.g. Psalm 19:1; Romans 1:19-20).

Why are we so enraptured with the cosmos? There is always a fascination with the unknown. Scientists want to better understand the universe and its laws; they search for clues as to its origins; they hope for signs of life. Everywhere they look, though, what they see—though it is impossibly vast and staggeringly awesome—is wasted, decayed, lifeless.

Though some may be disappointed by that reality, it aligns perfectly with what is revealed in the Bible about the universe’s present state. The Bible shows why it functions according to laws so perfect that human beings can throw a touchdown pass to Pluto—and why the things floating in it look like debris from a structure fire. Scripture also explains, if you can believe it, how it will become beautified, perfected and filled with life!

The successful completion of this mission marks the end of an age of planetary exploration for human beings. We won’t see another new planet up close for the first time—not in this age anyway. Pluto was the last of the known worlds to explore. Within three or four years and another billion miles, New Horizons should reach more-distant significant objects within the Kuiper Belt, a huge ring of comets and icy debris that encompasses our solar system. After that, it will sail into interstellar space, where it isn’t expected to hit anything else to report home about.

As awesome as this trip was, it reinforced just how unattainable any more-distant object is. If you shrank our solar system and the 3 billion miles between you and Pluto down to the size of a beach ball, on that scale the nearest star, Proxima Centauri, would be one mile away.

We knew almost nothing about Pluto, which is still in our cosmic backyard, until we managed to get within a few thousand miles of it. What mysteries lie beyond?

Science’s answers are extremely limited. However, revelation from the Creator of that vast expanse gives us a perspective that radiates with inspiration.

Few understand this, but God created that immense amount of real estate for a marvelous purpose. Humanity’s curiosity about the cosmos will one day be rewarded with far more than mere pictures and data captured by robotic flybys of relatively nearby planets. Our journey into the great unknown has barely begun.

To learn about the astounding purpose and future of the universe, order a free copy of our booklet Our Awesome UniversePotential.