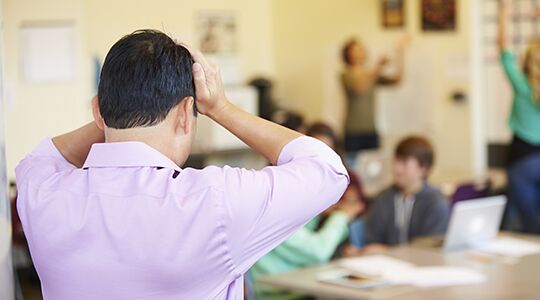 Are black students more likely to be disciplined because teachers are racists? Or is there a more likely reason?

On July 22, the White House tweeted to its 6.5 million Twitter followers: “The number of students suspended in America each year could fill 45 Super Bowl stadiums. It’s time to #RethinkDiscipline in our schools.”

American education is in crisis. Our schools are in crisis.

President Obama says the solution is to rethink discipline—especially when it comes to disciplining black and minority students. According to the White House, black students are 3.5 times more likely to be suspended than white students. This “disproportionality” in suspensions is evidence of systemic racism within the educational system, it says.

But are teachers really, on average, racist? What about African American teachers? And will President Obama’s solution fix things?

Schools that have been found to suspend black students disproportionately are increasingly finding themselves under Justice Department prosecution. In Minneapolis for example, it was found that black and Latino students were suspended more often than white and Asian ones. According to the Justice Department, this is evidence that Minneapolis’s 2,300 teachers are racist, or at least unconsciously racist.

The school district has since agreed to only suspend white and Asian students until the percentages match up.

Consider what the Pacific Educational Group and its founder, Glenn Singleton, teach—which is now being taught in schools across America, according to the Competitive Enterprise Institute:

This is what is now being taught in many American schools—especially those in inner cities.

But it is also coming to a school near you. President Obama has authorized a Civil Rights Data Collection project to collect the disciplinary records of every public school student in America. Its purpose is to ferret out supposed disparate racial disciplinary rates so that schools can be fixed.

Now consider how the Justice Department believes teachers need to be fixed. Here is what Singleton has said teachers should expect to experience during Pacific Educational Group training. It is representative of the type of reeducation training being forced on teachers across America.

Conversations follow a structured format in which participants examine and embrace specific premises, such as the ubiquity of white privilege and racism, and thus raise the consciousness of whites.Participants must “come to recognize that race impacts every aspect of your life 100 percent of the time.” Meanwhile, “anger, guilt and shame are just a few of the emotions” whites should expect to experience “as they move toward greater understanding of Whiteness.”Enlightened whites, in the authors’ description, speak in the chastened, cringing language of someone who has emerged from a reeducation camp.

Taxpayers are paying millions of dollars to be indoctrinated with this rubbish.

And oh—so far there is no evidence that the Pacific Educational Group’s racial hatred programming (operating since 1992) has done anything to close the achievement gap in any of the schools it works with.

Should we really be surprised that telling students that their loudness needs to be accommodated hasn’t helped their grades? That being punctual is a white cultural trait? That using correct grammar is white-man’s language?

One other thing. The Supreme Court even cited the Pacific Educational Group’s ridiculous racial beliefs which were for a time adopted by Seattle schools for striking down the school district’s decision to allocate children to schools based on race.

Yet the Justice Department continues to push these racist policies on schools—all in an effort to supposedly reduce racism.

One school principal described the new educational approach this way: “We are asking our staff to change rather than expect kids to change ….” What is the point of even having teachers?

Again: Are we surprised the achievement gap keeps widening?

Which brings us back to the new “#RethinkDiscipline” campaign pushed by the White House.

What is this campaign really about? Do its authors really think that banning suspensions and expulsions of minority students will help children? It certainly won’t help the children who are stuck in classrooms with the bad apples who continue to disrupt classes, monopolize teacher time and refuse to listen.

And it won’t help troublemakers either. By breaking the link between cause and effect—or action and consequence—these students are being taught how to fail in life.

One thing this kind of racist teaching will do is create a generation of angry black and minority students who believe that society is institutionally racist and that their failures are due to a society run by white people.

Is that what America needs or wants?

A teacher’s job is to do everything he can to help students gain the tools they need to be successful at life. Bringing national attention to the out of control behavioral problems in America’s schools is a good thing. It is desperately needed. But the White House’s solution to discipline problems and the widening achievement gap—which is to reduce discipline and blame racist white teachers and society—is guaranteed to make things worse.

How worse will it get? Read editor in chief Gerald Flurry’s article “‘Your Cities Are Burned With Fire.’”

You can listen to Stephen Flurry discussing this topic here (time code: 27:55).