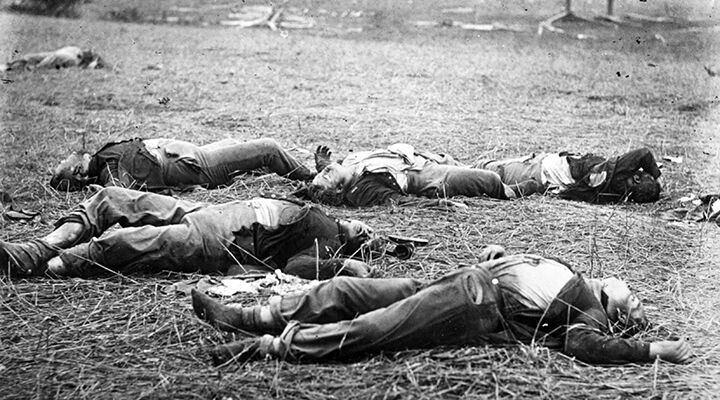 This month, 152 years ago, the Battle of Gettysburg was being savagely fought by our forefathers. It would prove to be the decisive turning point of the Civil War, finally giving the North the momentum and strategic upperhand to overcome the South.

Nearly 170,000 men were involved in the battle: 95,000 under Gen. George Meade in the Army of the Potomac, and 75,000 under Gen. Robert E. Lee in the Army of North Virginia. Both armies converged on the small town of Gettysburg, strategic because it was a hub of good roads heading in any direction, and for three days they clashed. Each assault of the South was repulsed, and Lee was forced to retreat. As T. Harry Williams expressed “On July 1-3 they fought the greatest battle ever waged in North America.”

Three days of battle resulted in over 50,000 casualties (killed, wounded, captured or missing). It was a brutal battle, fought in the summer heat. It took months to bury the dead bodies. It remains the deadliest battle to date in American history. The most destructive clash in our history was not inflicted by foreign regimes or invading armies, but rather by our own hands.

It is odd to consider today the phenomenon of civil war in this nation: the prospect of armies marching on our own soil, Americans killing Americans, and a nation divided in two. The Civil War was the most tragic time in American history: brother fought against brother, father against son, families were torn apart. Heartbreak and bitterness flowed through the nation as the blood flowed from the battlefields of Antietam, Chancellorsville, Shiloh and Vicksburg. The disagreements over state rights and the morality of slavery, usually fought in Congress and the Senate, became a rampant embitterment that forced a total war on all Americans. However, the Union was saved.

Gettysburg’s importance resides not only in understanding military history; perhaps its greater value is the legacy it leaves for us today. One cannot write any nobler words about Gettysburg than President Abraham Lincoln’s Gettysburg Address:

Four score and seven years ago our fathers brought forth on this continent, a new nation, conceived in liberty, and dedicated to the proposition that all men are created equal.Now we are engaged in a great civil war, testing whether that nation, or any nation so conceived and so dedicated, can long endure. We are met on a great battlefield of that war. We have come to dedicate a portion of that field as a final resting place for those who here gave their lives that that nation might live. It is altogether fitting and proper that we should do this.But, in a larger sense, we cannot dedicate—we cannot consecrate—we cannot hallow—this ground. The brave men, living and dead, who struggled here, have consecrated it, far above our poor power to add or detract. The world will little note, nor long remember what we say here, but it can never forget what they did here. It is for us the living, rather, to be dedicated here to the unfinished work which they who fought here have thus far so nobly advanced. It is rather for us to be here dedicated to the great task remaining before us—that from these honored dead we take increased devotion to that cause for which they gave the last full measure of devotion—that we here highly resolve that these dead shall not have died in vain—that this nation, under God, shall have a new birth of freedom—and that government of the people, by the people, for the people, shall not perish from the Earth.

That is what was at stake at Gettysburg; the future of freedom. Failure would have meant the breakup of the Union, the perpetuation of slavery, and the defeat of the principles conceived at the nation’s birth. It falls to us, the living, to learn the lessons from the 250,000 who died in the Civil War, and remember what happens when we allow division to conquer reconciliation.

This is an opportune time for all of us to stop and reflect on the importance of national unity. We live at a time when the fabric of American society is being torn apart by racial tensions and the challenge of the progressive movements against traditional institutions. Emotions and prejudices are being chosen instead of rationality and truth.

The Supreme Court of the United States decided a few weeks ago to usurp state rights, walking down the same path as those politicians in the 1860s. Can the Union stay democratic when it seems each branch—the legislative, executive and judicial—seems to be overstepping its boundaries or underachieving in its responsibility?

Where are all of these events leading the United States? John Quincy Adams’s observation about the division over slavery contains the answer for us today:

I considered it at once as the knell of the Union. I take it for granted that the present question is a mere preamble—a title page to a great, tragic volume.

The soldiers at Gettysburg wrote the climax of that volume in their own blood. The present-day circumstances in this nation all point to our inability to learn from the deadly mistakes of the past. Jesus Christ said in Mark 3:25: “And if a house be divided against itself, that house cannot stand.” President Lincoln quoted these words in our nation’s darkest hour, and it would be good for us to heed them again today. The anniversary of Gettysburg is a reminder of what it takes to recapture national unity once it is lost. A failure to learn this lesson will mean that this “government of the people, by the people, for the people, shall … perish from the Earth.”

You can know where all of the events within America are heading, and the bright future ahead. Read “Your Cities Are Burned With Fire” and “Police Under Attack” by editor in chief Gerald Flurry.