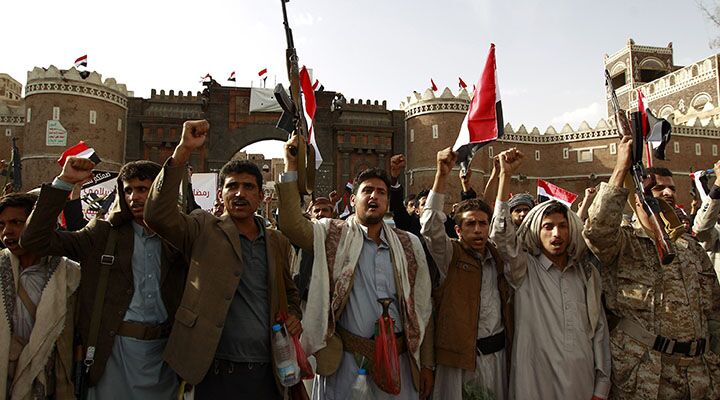 How the Saudis are giving Yemen to Iran

From the moment Houthi rebels swarmed through the Yemeni capital of Sanaa, the neighboring nation of Saudi Arabia called the coup an Iranian power grab.

Saudi suspicions were well founded. The Houthis’ Shiite beliefs and desire for greater influence in the nation mesh perfectly with Iran’s broader ambitions for the Middle East. The situation is similar to Lebanon where Iran props up Hezbollah—a Shiite terrorist proxy in a country where the prime minister and some larger parliamentary groups are Sunni.

But the moment the Saudis announced they were to intercede with airstrikes in an attempt to thwart the apparent power grab, Saudi Arabia appears to have initiated a self-fulfilling prophecy.

Before the Houthi takeover, Iran was intricately involved in laying the groundwork for the coup. It armed and trained Houthi soldiers. It sent some to Lebanon for pilot training, even though the group did not have decent aircraft until very recently. Iran supplied teachers to the Houthi schools, ensuring the transition from a youth movement in 1992 to the radical rebel group we see today. It also supplied financing and even medical treatment.

Iran has been investing so heavily in the Middle East’s most impoverished nation for a reason. It has been plotting to overthrow and eventually control Yemen for years. It had the overthrow, but it still didn’t have the country. The Shiites pushed hard south toward the port city of Aden, but there was still a long fight ahead.

Up against the Houthis were, and still are, a number of secessionists, government loyalists, Sunni tribes and factions such as the deadly al Qaeda in the Arabian Peninsula (aqap). The Yemeni populace was given the opportunity to choose a side. The Houthis would undoubtedly have a far greater struggle on their hands if the population turned against them.

But in a stroke of good fortune to the Houthis and Iran, the Saudis attacked.

Saudi Arabia launched an airstrike campaign against the rebels, targeting military outposts and facilities. The air raids have since expanded to targeting the homes of key members. The devastation has been significant, particularly in the Sanaa and Saada governorates. And as the Houthis claim more territory, Saudi airstrikes similarly expand—affecting more of the population.

Yet these very attacks are leading to a total Iranian victory in Yemen. Saudi Arabia’s strategy is turning the populace against the supposed liberators!

First, the airstrikes are not enough. Taking a leaf from the American playbook, the Saudis thought that airstrikes would sufficiently weaken the Houthis and help supporters of the former government push them back. But if anything, the Houthis have since expanded their operations. They have been slowed, but are not withdrawing to previous boundaries. In fact, the Houthis have been launching almost daily attacks into southern Saudi Arabia itself. The Washington Post quoted one Middle East expert who said, “There’s a risk that with continued aerial bombardment of Houthi targets, the Houthis, in turn, will push even harder to attack southern provinces (of Saudi Arabia), creating a security disaster for the Saudis.”

Yemen’s mountainous north, and Saudi Arabia’s porous border creates a nightmare for the Saudis. In 2009, Saudi Arabia lost more than 100 troops to Houthi attacks. As such, Riyadh is reluctant to authorize a ground invasion.

But the longer Saudi Arabia keeps up its airstrikes, the more likely it will completely lose the backing of the populace.

Many Yemeni citizens are realizing that the Saudi intervention is failing. The fight that Saudi Arabia thought would be over quickly has proved to be far more of a battle than anticipated—it needs help. The people of Yemen see that, and they see the reluctance to commit any further. Disenchantment with Riyadh and the ousted government is setting in.

Making matters worse, the interests of the former government now align with some very unfavorable characters. Radical Sunni groups like aqap are also interested in seeing the Houthis pushed back. But many civilians in the country blame the terrorist group for being a key player in the current climate of instability. As such, a pseudo-alliance between the ousted government and the terrorists is not winning over anyone in the charred towns and bullet-ridden villages.

The presence of aqap also gives the Houthis reason not to retreat. They claim that if they do, aqap will fill the void. This lends argument to the Houthis’ claim on the region.

Adding further to the destruction of Saudi-Yemeni relations is the prevention of international aid. Blockades and strict screening prevent Iran from shipping weapons to the Houthis, but it also prevents food and medical aid from reaching the starving nation. The populace undoubtedly hears that Iran’s attempts to send aid are being stymied by those trying to reinstate the government. Obviously the international community doesn’t want to see Iranian weapons and aid going to Houthi rebels. But for the majority of the starving and poor Yemenis, the distinction between friend and foe is increasingly blurry. Yes, the Houthis are the source of much of the destruction, but it is the pro-government forces that are preventing what Iran claims to be “aid for the people.”

And with each day, more homes, power facilities, banks, hospitals and government buildings are destroyed—mostly by the Saudi airstrikes.

Fear, hunger, illness and violence are taking a heavy toll on the civilians caught in the middle of the power struggle. And more and more often, it is turning the people against the Saudis. Iran’s image, however, is growing. With one hand, Iran portrays itself as a helper that wants to send aid to the people but is blocked by suspicious international forces. With the other hand, Iran strengthens the Houthis’ position to ensure that the Iranian proxy seizes as much of Yemen as possible.

But both hands are tightening Iran’s grip on the nation.

Hostility toward the Saudis is growing: Shiites across the Middle East are suddenly calling the relatively unknown Houthis “brothers in arms.” It is a perfect climate for Iran to seize control.

From the moment the Saudis accused Iran of a power grab and acted to thwart it, it began to fulfill its own prophecy. Iran has used the instability—just as it has used instability in Iraq and Syria, and previously in Egypt and Libya—to establish a strong presence and build ties.

Iran has been planning this takeover for years—playing the long game and waiting for the right moment. The Saudis have just given it to them.