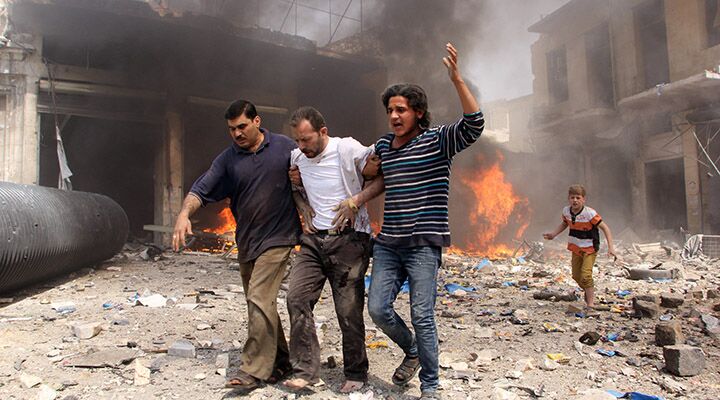 Syria’s dictator is under siege and could fall. Who stands to benefit most?

Since inheriting his father’s 30-year-old rule of Syria in 2000, President Bashar Assad has maintained a strong grip on power. But things have changed since the Arab Spring and the consequent civil war in his country.

Syria’s civil war has raged for over four years now, and the country is engulfed in suffering. More than 200,000 people have been killed, according to the United Nations. Tallying up the dead got so bad, that in 2013, an exasperated UN momentarily gave up counting. Nearly 8 million people have been displaced from their homes; 4 million have fled to other countries.

The economic impact of the war has been just as disastrous: 80 percent of Syria’s population is poor, and 50 percent is unemployed. Over half of the public hospitals in Syria have been damaged, and most of the doctors have fled. In the four years of the Syrian civil war, human development regressed four decades. Stunningly, life expectancy in the country has dropped by 20 years.

The Economist estimated that the war in Syria has created one of the worst humanitarian crises of the 21st century.

The Assad regime has directly caused much of that suffering by bombing schools and hospitals—institutions that educate and care for his own people.

Assad is also known for attacking enemy combatants and civilians alike with chemical weapons. Assad’s use of chemical weapons such as chlorine was considered by United States and other nations a redline, beyond which sterner measures would be taken to oust Assad.

People have predicted Assad’s fall for years, but Syria’s dictator has clung to power. Propped up by the world’s greatest state sponsor of terrorism, Iran, the Assad regime has maintained relatively firm control of Syria.

That is, until now.

Today, Assad contends with a handful of violent, dangerous extremist groups. Pressure is mounting on him from at least four militant groups: the Southern Front, backed by the United States and Jordan; the Army of Conquest, sponsored by Saudi Arabia, Turkey and Qatar; the al-Nusra Front, backed by al Qaeda; and the Islamic State.

Right now, the Islamic State controls half of the country—35,000 square miles.

“Assad already doesn’t rule his country, except for a few undersized, beleaguered enclaves whose prospects for survival are steadily diminishing,” the Jerusalem Post wrote on June 3. Also diminishing is Russia’s traditional support for the Assad regime, the Post reported. The Kremlin is reportedly withdrawing most of its advisers from Syria—a possible sign of Russia’s diminishing confidence in Assad’s future.

Israel’s Channel 2 Arab affairs analyst Ehud Ya’ari stated, “Unless Iran does what it hasn’t done so far—send in their own forces in significant numbers—Assad is finished.”

“Based on current trend lines,” said a U.S. intelligence official, “it is time to start thinking about a post-Assad Syria.”

What will happen to this beleaguered nation after Assad is gone?

Trumpet editor in chief Gerald Flurry answered that question three years ago in our September 2012 cover story, “How the Syrian Crisis Will End.” This article is important to remember in light of recent events.

“Right now, Syria is Iran’s most important regional ally,” Mr. Flurry wrote. “But that is about to change.”

Syria has been Iran’s most important ally in the region. It is key to Iran’s ability to extend its reach in the Middle East, particularly into Lebanon, through Hezbollah. Analysts consider Syria, Iraq and even Lebanon as part of a Shia crescent dominated and controlled by Iran.

Mr. Flurry continued, “What we are seeing right now in Syria is a major biblical prophecy in the process of being fulfilled! What happens in Syria will lead to mighty nations changing course and the foundations of this world being shaken!”

In the nearly three years since Mr. Flurry wrote that article, we have seen an increasing likelihood of Assad falling and a rift opening between Syria and Iran—especially in recent weeks.

But there is something else Mr. Flurry mentioned that is yet to become so apparent: Germany’s role in this process. He wrote:

One of Germany’s primary objectives in this region is to develop an axis with Middle Eastern states that oppose Iran. Germany has been stepping up its political involvement and its financial and military investment in Saudi Arabia and other Gulf states, Turkey, Lebanon and Jordan. It has formed solid trade relationships with virtually all these countries, covering many industries from telecommunications to the military.For Germany, Syria’s revolution isn’t about a humanitarian crisis at all. It’s about geopolitics and how Berlin can aggressively advance its strategic interests in the Middle East!

As you continue watching the impending demise of Bashar Assad, watch this trend of Germany moving deeper into the region to check Iran.

Already, Germany has signed comprehensive military deals with Algeria, and it operates a personnel carrier plant there.

German soldiers and police are stationed in Sudan, South Sudan, Uganda and the Democratic Republic of Congo. Germany also has military personnel in Djibouti and Somalia.

In the Arabian Sea, Germany has a frigate, maritime surveillance planes and troops.

German soldiers in Afghanistan make up the biggest contingent of troops after the United States and Britain. Germany operates an airbase in Uzbekistan and antiaircraft missile batteries in Turkey.

By virtue of its influence in the EU, Germany basically has control over the Mediterranean island of Cyprus. German patrol boats roam the coast of Lebanon, and there are even German soldiers on the ground in Lebanon.

Germany is getting so involved in the Middle East because it recognizes the threat posed by Iran’s Shia crescent. It is preparing for a whirlwind of destruction.

The U.S. reiterated in March that it is seeking an outcome “that does not in the end include Assad,” and reports indicate that Germany is seeking that outcome even more.

In October last year, German-Foreign-Policy.com reported that “German demands that the West intensify its military engagement against Syria coincide with similar demands in the U.S.A.”

The author of a recent article published by the German Institute for International and Security Affairs (swp) is also making a plea for enhancing military engagement and the overthrow of the Syrian government. She writes that Western countries must “seriously rethink their original strategy” for the Syrian war, which had placed too much emphasis on the “promotion of civilian structures.” At the same time, the West should not focus too much on its war against [the Islamic State], but simultaneously also against Assad. What is needed is “the creation of a no-fly zone over the entire Syrian airspace,” as well as the total elimination of the Syrian Air Force.

With these developments, Mr. Flurry’s Bible-based warning takes on heightened urgency: “The whole world ought to be watching what Germany is doing in the Middle East.”

It looks like Assad is about to fall. So how will the Syrian crisis end?

Watch for Iran to lose its hold in Syria. Expect the Syria-Iran alliance to break. Above all, watch to see if Germany doesn’t make a strong move to pick up the pieces—and to actually use Syria as a tool to fight Iran.