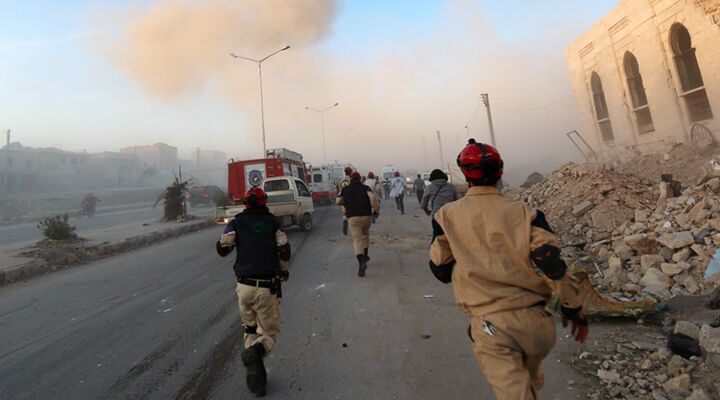 Allegations surface that Assad is helping the terrorists.

Syrian President Bashar Assad and the Islamic State working side-by-side. Such a concept might seem outlandish when you consider that the Islamic State seized the city of Palmyra from Assad’s forces only a week ago. But no sooner than clashes between the two erupted, reports began circulating that the two were in fact working together elsewhere in the nation.

The incident occurred on May 31, when the Islamic State fought rival rebel groups north of the Syrian city of Aleppo. While skirmishes between the terrorists are common, this particular fight was interesting because the Islamic State was supported by Syrian airstrikes.

The U.S. Embassy in Syria tweeted, “With these latest reports, #Asad is not only avoiding [Islamic State] lines, but, actively seeking to bolster their position.”

The regime defended itself, stating, “The Syrian army is fighting Islamic State in all areas where it is present in Syria.” But Assad’s selective use of airstrikes is highly suspect. The fact is that with each airstrike on rebel forces, the Islamic State’s job gets a little easier.

So why help? After all, the Islamic State constitutes a major threat to Assad’s regime. The terrorist group has had enormous success in Iraq and eastern Syria. Now the group is battling to dominate the rebels in the north as well as push at Damascus in the south.

Yet despite this risk, there are a few strategic reasons why Assad would be happy to lend aid to the Islamic State in northern Syria.

No Pain, No Loss

First, consider Assad’s losses should Aleppo change hands. Right now the city is controlled by the rebels. If the Islamic State takes control, what ground has Assad lost? The city will transfer from the hands of one enemy to another. And more importantly, Assad will then be facing just one enemy in the region, not two.

Assad’s airstrikes mean that he suffers no troop casualties—no pain. And because Assad hasn’t held that territory for years, he gets rid of the rebel forces without actually losing ground to the Islamic State—no loss of territory.

The situation has another benefit for Assad. With troops stretched thin and airstrikes ineffective on their own, allowing the Islamic State to take on the rebels cuts Assad’s losses. Assad can afford to soften the rebels then sit back and watch the ensuing bloodbath without having to get his hands dirty or lose precious troops. As the adage goes, the enemy of my enemy is my friend. The Islamic State wants to defeat the Syrian rebel factions, therefore, its goals align with Assad’s.

As the adage goes, the enemy of my enemy is my friend.
Assad has been battling rebel factions for years in the civil war. While the Islamic State is an enemy of Assad, it does provide him a way to remove some of his tenacious adversaries. Many of the rebel groups are supported directly or indirectly by outside nations, such as Saudi Arabia and the U.S. If Assad helps the Islamic State remove the rebels, then he faces just one enemy—an enemy that doesn’t have the backing of the international community.

That is the driving motivation behind Assad’s support of the Islamic State’s fight against the rebels.

Who Is Worse: Assad or the Islamic State?

If Assad lets the Islamic State remove the rebel factions, the Syrian conflict becomes a little more black and white. International forces will be faced with just two options: indirectly support Assad or the Islamic State. No nation in the Middle East or elsewhere would openly support the Islamic State. That would leave Assad as the only option—the lesser of two evils as some perceive it.

Assad is banking on this should the Islamic State successfully drive out the rebels. While Assad is undoubtedly aware that he won’t be backed directly, he surely realizes that any future action would likely be against the Islamic State first, not him.

If the international community works to destroy the Islamic State, the side effect would be strengthening Assad. The dictator would be quick to capitalize in a rebel-free Syria.

With so many long-term benefits, expect Assad to keep walking the fine line between supporting the Islamic State and destroying it. This will likely continue until the more “moderate” rebels are defeated, or Assad himself succumbs to the terrorists.

Keep watching the Islamic State. Its very existence is being exploited by the powers-that-be in the Middle East. As horrific as the terrorist group is, we can’t afford to lose sight of people like the leaders of Iran and Syria who are using this time of chaos to further their own nefarious plans for the region.