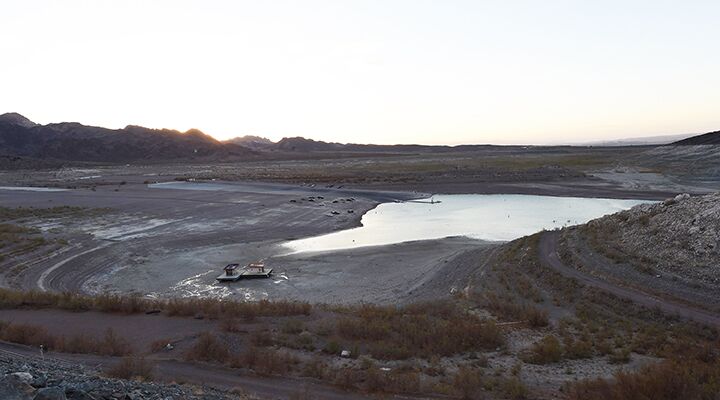 California is suffering its worst drought in 1,200 years. And the news just got worse.

Lake Mead, one of the state’s most important water reservoirs, has hit a historic low. On Sunday, the water level fell to just shy of 1,078 feet above sea level. That is almost 140 feet below capacity and the lowest level since the reservoir was filled.

Officials estimate that Mead will drop six more feet before the summer is out.

With little snowpack in the Rocky Mountains, the Colorado River may flow at unprecedentedly low rates too. Federal forecasters originally predicted the river would flow at 71 percent capacity. Now they say it could fall to 50 percent or lower.

According to the Los Angeles Times, water levels are so low that analysts now wonder if the Hoover Dam’s electricity-generating capacity could be impacted. And kpbs reports that since last year, 12 million trees have died across the state due to the drought. Many more are primed for fires.

The Colorado River provides water for 40 million people across the Southwest. Cities such as Los Angeles, San Diego, Phoenix and Las Vegas are critically dependent on its flow.

On April 1, California Gov. Jerry Brown issued an executive order mandating a 25 percent reduction in water use. It may be too little too late.

After 15 years of drought, every major water reservoir is below its historical average. For cities, water cuts of this magnitude are an annoyance. For agriculture, they can be devastating.

“The death of Lake Mead should be a wake-up call to people … that we need to boldly address this drought,” Howard Watts, a spokesman for the Great Basin Water Network, told the Times. “We’ve been slow to act, slow to react. Nobody knows when this drought is going to end.”

It should be a wake-up call. But what is the real message people should get? Read “Is California Under a Curse?” to find out.