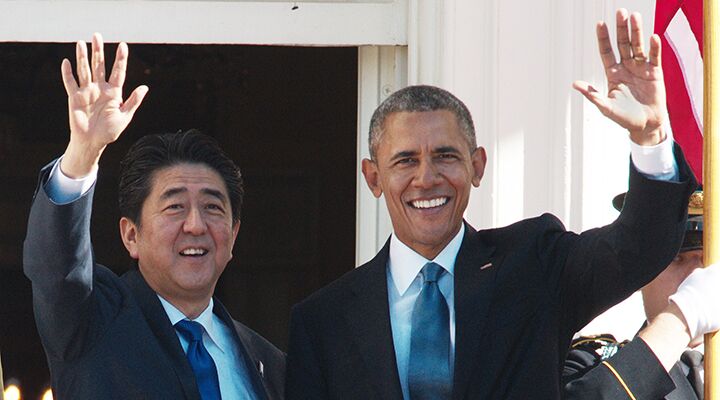 Japanese Prime Minister Shinzo Abe laid a wreath at the World War ii memorial in Washington, D.C., on Wednesday. Abe also offered solemn condolences for the Americans who died in World War ii as he became the first Japanese leader in history to address a joint meeting of Congress.

“History is harsh. What is done cannot be undone,” he said. “With deep repentance in my heart, I stood there in silent prayers for some time. My dear friends, on behalf of Japan and the Japanese people, I offer with profound respect my eternal condolences to the souls of all American people that were lost during World War ii.”

But Abe stopped short of offering an apology for Japanese conduct during the war, including sexual enslavement of tens of thousands of Asian women by Japan’s imperial army.

South Korea and a number of U.S. lawmakers have sought such an apology, but Abe did not offer one.

During his address, he also sought support for a 12-nation trans-Pacific trade pact that has divided Congress and provoked opposition in Japan. He told lawmakers that it’s about spreading the shared values of the rule of law, democracy and freedom.

Abe’s visit comes as America actively encourages Japan to rewrite its pacifist Constitution and become more militarily independent. American strategists see Japan as a counterweight to China, and want it to become more geopolitically aggressive despite its history.