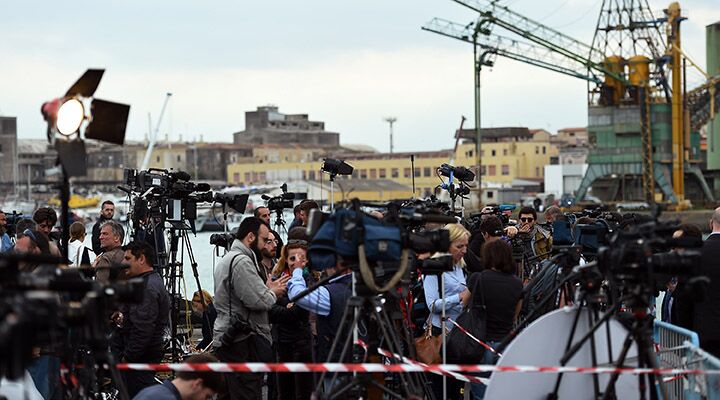 It is easy to be cynical about the outpouring of grief from the European Union’s leaders on behalf of the roughly 800 migrants who drowned when their boat capsized in the Mediterranean last week. Those leaders pledged “determined action to prevent the loss of lives at sea and to avoid that such human tragedies happen again”—but that pledge was made in October 2013, the last time Europe saw a crisis of this kind.

Yet here we are again. Mass death in the Mediterranean is now common. From January to April 2014, 56 immigrants died trying to cross the Mediterranean. For the same time period in 2015, that number is 1,750.

Observing a minute of silence in remembrance of the victims of the recent tragedies in the #Mediterranean. pic.twitter.com/zKlXCZhx5X

So EU leaders make their pilgrimage to Brussels. They hold meetings and give grand statements to the cameras, because these are easy ways to show they care. But in the more than 18 months since the last mass drowning hit the headlines, the Lampedusa disaster, little action has been taken.

Meanwhile, Europe’s press cries out for the EU to do more—both to rescue drowning migrants and to allow more of Africa’s struggling citizens into the Continent. “We have become accomplices to one of the biggest crimes to take place in European postwar history,” scolded Germany’s Spiegel magazine last week.

But Europe will not open its doors to tens of thousands of more African immigrants, making any debate over the morality of such a policy irrelevant. Just about all of Europe’s major leaders know that in the coming months after this crisis has blown over and been forgotten, they will face serious challenges from anti-immigrant and anti-Muslim parties. Opening the doors to impoverished Muslims from North Africa will only cost them votes.

So most of the talk on this subject, though full of sound and fury, signifies nothing. Yet amid the platitudes there are important developments. Europe’s migrant dilemma is leading the EU to increase its military presence in the Mediterranean, gradually drawing it deeper into Africa.

If Europe refuses to make it easier for Africans to migrate to Europe legally, its only other way to prevent these deaths is by stopping the boats. A possible third way—rescuing the drowning migrants and returning them to Africa—is not an option. Europe’s warped human rights legislation outlaws this, which has likely increased the death toll by encouraging European navies not to rescue migrants in distress.

After their meeting last week, EU leaders announced they would triple the funding for their Mediterranean surveillance operation, Triton, which will now receive around $9.7 million a month. Several EU members have pledged to contribute militarily. Britain will send its Navy’s flagship hms Bulwark. Germany has promised 11 ships. France has pledged a few planes for a few days.

But the second announcement is even more dramatic. EU leaders also promised a mission “to identify, capture and destroy” the ships used to ferry the immigrants over, “before they are used by traffickers.”

This military mission requires either an invitation from Libya (which lacks a functioning government) or a United Nations mission. There is still every chance that such a mission could be blocked by Russia. But it shows the way EU leaders are thinking—military involvement in Africa, not loosening immigration restrictions—is the way to solve this problem.

This thinking crops up elsewhere in conclusion of the European Council summit. EU leaders promised to “increase support to Tunisia, Egypt, Sudan, Mali and Niger among others, to monitor and control the land borders and routes.” This would include building on current military operations in the region. They also promised to “deploy European migration liaison officers in key countries to gather information on migratory flows, coordinate with national liaison officers, and cooperate directly with the local authorities.”

These are small steps, but they will be followed by bigger ones. Last year, 170,000 crossed from Libya to Italy or Turkey. That alone is posing political and economic problems for southern Europe. But this is becoming a national security threat. Over the last few months, leaders of the Islamic State terrorist group have threatened to send terrorists to Europe in the migrants’ boats.

Libya “has a long coastline and looks upon the southern Crusader states [the Islamic State’s name for Europe], which can be reached with ease by even a rudimentary boat and note that the number of ‘illegal immigration’ trips from this coast is massive,” wrote one Islamic State supporter.

“If this was even partially exploited and developed strategically, pandemonium could be wrought in southern Europe,” he continued.

Libyan Gen. Khalifa Haftar gave a similar warning—telling the Associated Press that Islamist militants “will head with the illegal migrants to Europe.”

This has probably already happened. There are certainly extremists among the migrants—a fortnight ago Sicilian police reported that a group had thrown 12 of its fellow migrants overboard. The Muslim attacks drowned them because of religion—the victims were Christian.

Islamic State supporters have also posted photos they have taken in Rome, showing they are in the city and planning to attack.

Pro#IS users circulating threatening pics allegedly from inside #Italy #Rome; claim to be “waiting for the zero hour” pic.twitter.com/RSx5auBXkV

Islamists are even talking about using Libya as a base to attack Mediterranean shipping. In a sea that has long been a secure European lake, this cannot be tolerated.

This is why Europe’s response will be more forceful than after the 2013 Lampedusa disaster. The main announcements since last week’s sinking all revolve around securing Europe. There is now a real possibility of European military strikes in Libyan waters, and even on Libyan territory. Europe’s surveillance operation is not aimed at rescuing immigrants. It operates only within 30 miles from the European coast—it is aimed at protecting Europe.

The odds are that this won’t be enough to defeat the Islamists—Europe rarely takes action strong enough to solve any problem unless it is forced to. But an increased Islamist presence in Libya would force Europe to act.

That action would not be easy. Earlier military missions in Africa have shown that Europe struggles to put together the logistic capacity for larger Africa missions—for example, in the past it has had to rely on the United States for transportation and refuelling. In the longer term, Islam’s presence in North Africa will force Europe to increase military spending while also sharing more resources among themselves.

“All you need to do is get a good map of the Middle East, with the emphasis on the Mediterranean Sea and the Red Sea. Then you can see why … radical Islam is so interested in an alliance with or control over” Libya and Ethiopia “as well as Egypt and Tunisia,” Trumpet editor in chief Gerald Flurry wrote in 2011. “They are on the two seas that comprise the most important trade route in the world!”

In 2013, he wrote, “Northern Africa is turning into a battleground with enormously important prophetic implications.”

Immigration and the threat Islamic militants pose are drawing Europe deeper into this battleground. For more information on where this is leading, read Mr. Flurry’s article “Libya and Ethiopia Reveal Iran’s Military Strategy.”