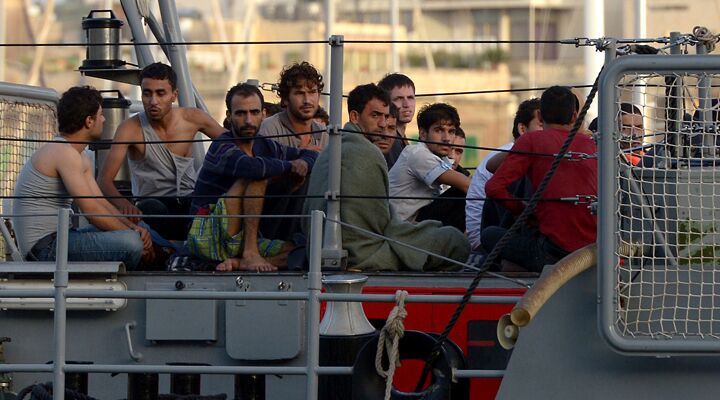 Roughly 400 immigrants have died in shipwrecks over the last two weeks. The EU is using this as an excuse to beef up surveillance of the Mediterranean Sea and open up an intelligence base in Libya.

The European Parliament approved a new “big brother” surveillance program for the Mediterranean Sea on October 10, after an overcrowded boat full of migrants sank off the Italian island of Lampedusa, killing 359. The new program, eurosur, is marketed as the solution to the tragedy. In reality, it is nothing of the sort.

The program establishes drones and satellites to keep a vigilant watch on the Mediterranean, aided by offshore sensors and other intelligence equipment. It also includes a system for the EU to share this information.

Britain wanted to give the U.S. access to this intelligence, but the plan was blocked by the rest of the EU. That fact alone shows who America’s real friend in Europe is—no matter how much the American administration tries to curry favor with France and Germany.

Official estimates put the total price tag at €244 million (us$311 million). But the Heinrich Böll Foundation claims this is hugely underestimated: It puts the figure at €874 million ($1.19 billion). Given the EU’s history of massively underestimating the cost of important projects—especially intelligence projects—the latter figure is more likely to be correct. The lower figure, however, makes it easier to sell to the public.

As Spiegel points out, however, the surveillance program “doesn’t offer ways to save people like those killed in the deadly incident.” Deutsche Welle writes that “at its core, the European Border Surveillance System (eurosur) has nothing to do with the tragedy off the Italian coast—it was pure coincidence that the parliamentary vote on eurosur has come up now.”

eurosur has been in the works since 2008. European officials are using the migrant deaths to sell a project they were planning on implementing anyway. It also makes it look like they’re doing something to confront the problem of migrant deaths.

Immigration truly is a problem for EU nations. The EU’s liberal human rights laws and liberal courts make it hard to deport illegal immigrants once they make it to an EU nation. At the same time, voters don’t want the immigrants, and the governments, especially of southern Europe, can’t afford them. It is in the EU’s interest to find these boats before they enter EU territorial waters, so they can be returned to their country of origin more easily. The new program could help control immigration in that way.

But immigration isn’t the ultimate issue. The important point here, from a geopolitical point of view, is that the EU is extending its control over the Mediterranean Sea and into North Africa.

Another program, thinly disguised as an anti-immigration effort, is eubam Libya. Scheduled to be fully operational by December 1, eubam is a group whose stated aim is to help Libya manage its border and train its customs officials. When up to full strength in March, it will have 111 EU staff, 54 local staff members, and the same number of bodyguards. EU Observer described its staff as “a team of heavily guarded men.” While it will help prevent would-be emigrants from leaving Libya illegally, its real purpose, as EU Observer writes, is that “the new HQ in Tripoli will become an EU intelligence asset.”

The EU has requested a private security company to man the headquarters. The firm must provide “high quality security situation analysis” and give “security reports daily, weekly, monthly and six-monthly.” Those leading the security mission must be pre-cleared to handle files classified as “EU SECRET”—the second highest level of secrecy officially used by the EU. eubam will be equipped with 18 bullet-proof jeeps and have clearance to travel around the country and to open field offices.

In April 2011, Trumpet editor in chief Gerald Flurry warned that Iran was trying to gain power over the Mediterranean and Red Seas. In that article, he wrote that “Germany and the Vatican probably see Iran’s strategy better than any power outside the Middle East.” He warned that Europe would prepare to confront Iran.

Exactly a year later, he warned that “Northern Africa is turning into a battleground with enormously important prophetic implications.” He described how Europe and Iran were quietly vying for control of the region and the resources it contains.

That’s what eubam Libya and eurosur are about. eubam gives the EU a foot in the door in Libya, an opportunity to influence the government, and a base it can use to keep an eye on the terrorist groups moving in to fill the power vacuum.

eurosur allows the EU to confront smuggling and cross-border crime. But European leaders must also be worried about terrorists crossing into Europe, either via the land borders, or in small craft in the Mediterranean. eurosur will help the EU keep the most detailed and comprehensive watch ever over the EU’s borders. It is all about securing Europe against the nebulous threat of Iranian-backed terrorism.

Europe is taking offensive measures against the spread of Islamic terrorism in Africa through its military deployment in Mali and now in the Central African Republic. eurosur is a defensive counterpart to these efforts.

Europe is awake to the threat that radical Islam poses to the vital trade networks and resources in and around the Mediterranean. It also sees that it can no longer depend on the U.S. to contain that threat, so the EU is dealing with it personally.

Europe has obviously become more aggressive and assertive in North Africa and the Near East, areas it considers part of its sphere of influence. Watch for this trend to continue as Europe prepares to confront radical Islam and Iran without American help.