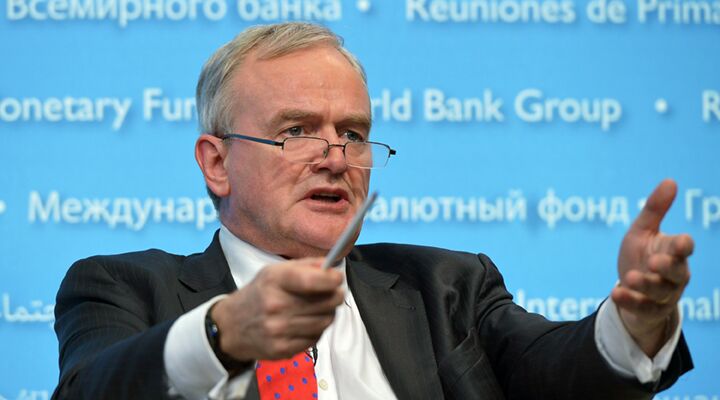 When banks start paying you to borrow money, you know you are living in a world gone mad.

The world’s banks have a big problem.

You have probably noticed the dismally low interest rate you are paid on your bank deposits. I earn 0.12 percent on my credit union account. I receive zero percent interest on my Bank of America account.

Yup. Banks lend out your money. Through the power of fractional reserve lending, they may lend out up to 10 times your money on deposit—and collect interest on all of it. And you get zero. Ziltch.

That’s not totally true. You get the “safety” of a secure account.

Welcome to America’s Alice-in-Wonderland economy. But what seems like your and my problem is also the bank’s problem. Bank of America, for example, has to find credit-worthy borrowers that it is willing to lend to at historically low—artificially manipulated low—interest rates.

That might be tougher than you think in America’s debt-bloated economy.

For that, you can thank the Federal Reserve. In an effort to stimulate the economy, America’s central bank printed almost $4.5 trillion since the 2008 economic crash. It calls it quantitative easing. In effect, for many people, it is better understood as quantitative fleecing. Is it too much to say borrowers get green to graze while savers get shaved?

All those newly minted greenbacks pushed interest rates to record lows and borrowing volumes up.

But perhaps American savers should be counting their blessings. In Denmark, Portugal and Spain, savers have to contend with negative interest rates. In these countries, savers pay banks for the privilege of depositing money.

Would you pay your bank interest for the honor of depositing money?

It is an upside-down world—and it is becoming even more upside down.

One Spanish national interviewed by the Wall Street Journal said he took out a $530,000 adjustable rate mortgage in 2006. Now that interest rates are negative, each month his bank actually pays him interest on the money he borrowed.

Many more borrowers may soon be receiving monthly mortgage payments too. The wsj says there may be hundreds of thousands of borrowers in Spain that may soon have their banks paying their mortgages if the European Central Bank follows through with its promise to keep printing money to push interest rates down.

Debt is good. Saving is bad. People getting paid to borrow money. What other incredible tricks do central bankers have waiting for us?

If they follow the advice of Citigroup’s top economist Willem Buiter, a doozy is headed your way.

The world should outlaw cash.

According to Buiter, the biggest impediment to economic recovery is getting people and businesses to spend enough. We need to jam more debt into the system.

This could be accomplished by much steeper negative interest rates. For example, he says interest rates could have been manipulated down to –6 percent in America! That would stop those evil savers and get people borrowing and spending.

But wait. There’s just one little problem. How do you force people to keep money in banks at negative 6 percent? Who in their right mind would pay a bank 6 percent interest just to keep their money on deposit? After 15 years, your $50,000 would have shrunk to $20,000.

It would create a run on the banks. People would stuff cash under their mattresses, safes and safety deposit boxes. The system would go insolvent. It would be the end of Wall Street.

Buiter’s solution? Abolish cash. Without cash—or bills larger than a five—people would be forced to keep their money in the system. And banks could continue to lend it out at low interest rates.

So much for free-market capitalism.

But don’t worry, it is all for the greater good, Buiter implies. Who wouldn’t want to borrow money if they could do so at zero percent? Surely that would make the economy boom. Problem solved. We all win.

Buiter is what the New York Time’s world-renowned economist Paul Krugman would call a “serious economist.”

In America, cash is still king, but even in the land of the free, some authorities are working toward restricting cash. The Economic Policy Journal reported April 13 that Louisiana became the first state to ban all secondhand shops that sell used goods from accepting cash. All payments must be electronic or check. Technically the law applies to garage sales too, although that doesn’t seem to be enforced, yet. The law is purportedly to help police track stolen goods.

“Global imbalances are so extreme, interest rate policy so absurd … that a massive currency crisis is all but inevitable now,” writes economic analyst Mike Shedlock. “The currency crisis could start in Europe. But it could also start in Japan, the [United Kingdom] or anywhere.

The fact that interest rates have gone negative in many nations, and that lenders pay people to borrow money, is a flashing neon sign that the economic system is dangerously unstable. And the ever wackier solutions policymakers are grasping at will only make it worse.

Banning physical money will not solve this world’s economic troubles. It may give the government unprecedented ability to monitor and control people, but it will not fix any of the fundamental problems with the economy.

Work hard to get out of debt now—before the looming debt collapse. Here is a free book to help you get started.