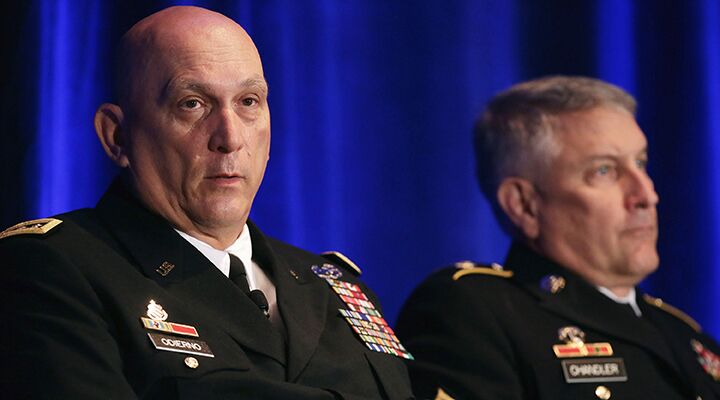 Britain’s military cuts are further weakening its alliance with the U.S.

America can no longer rely on Britain as a military partner because of cuts to its armed forces, head of the United States Army, Gen. Raymond Odierno, told the Telegraph’s Con Coughlin, according to an article published March 1.

The U.S. Army once relied on the United Kingdom to contribute a division-size force—around 10,000 men—to any conflict it was involved in. Now, it must plan for Britain to contribute half that. This means the British Army is no longer able to work alongside the U.S.A. as a separate unit; instead it is only able to supplement U.S. forces.

“I would be lying to you if I did not say that I am very concerned,” General Odierno warned.

Coughlin noted that the general’s statements come as “the raf [Royal Air Force] is desperately short of combat squadrons, the Navy is still trying to work out how it will provide the expert manpower and equipment needed to operate its two new Queen Elizabeth-class aircraft carriers, and the Army is struggling to cope with the drastic reductions to its ranks.”

Odierno’s comments came just over a week after British fighter jets rushed to intercept two Russian bombers flying off the Cornish coast. Due to budget cuts, the jets had to scramble from a base in Lincolnshire, over 300 miles away.

“They fly in these regions to check our air defenses and have probably worked out we are not as sharp as we were,” the former head of the raf told the Daily Mail. “They know it is provocative and they are doing it at a time when defense in the West is pretty wet compared to where they are.”

If Putin wanted to attack, he would not send a pair of bombers, he would send the lot and saturate our defenses; we couldn’t cope.The Typhoon is a really good aircraft but with their relatively small numbers they would be overwhelmed: The Russians would outflank us, go around us, or just go through us. …The modern generation of politicians has grown up in absolute security—they’ve never felt a threat to their existence, safety or security.They’ve taken peace for granted and decimated the Armed Forces. Let’s hope we don’t pay the price.

Britain’s military cuts have greatly weakened it, both in the esteem of its allies and enemies. The growing rift between Britain and America is a trend the Trumpet has been watching for a long time. For a full picture of this sorry state of affairs, as well as the solution to Britain’s military weakness, read our article “Want to Know What a Former Superpower Looks Like?”