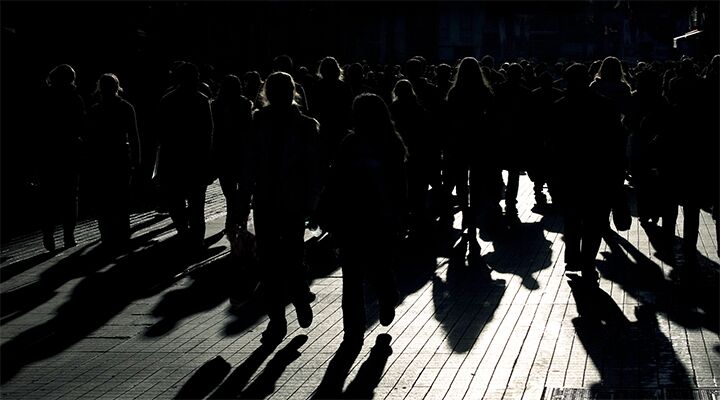 Like Rome during its last days, America is witnessing the total destruction of its families—and no one seems to care.

The foundation of any successful nation is its families—traditional families. Mom, dad, children. Mom and dad married. Children in submission to their parents’ authority. That might not be politically correct, but it is increasingly difficult not to see that America’s broken families are destroying the country from within.

Consider what happened in Ocoee, Florida, on February 17. Police said around 900 black teens stormed into the mall theater and food court after being refused entry to the R-rated Fifty Shades of Grey. Around 100 teens made it past security before doors were locked down.

Mayhem followed. Inside the theater, gunshots rang out. Fights erupted. Panic ensued. Frantic 911 calls lit up switchboards. Moviegoers trying to leave found the exits were locked shut. They were the lucky ones. The “gunshots” later turned out to be firecrackers tossed to terrorize people.

“Everybody just started scattering, ducking underneath the seats,” moviegoer Kenny Johnson said. “It was a scary moment.”

Outside the gates, police were overwhelmed. More fighting. One gun found. A stolen vehicle retrieved. Drugs.

Then the mob began to move. Before police reinforcements could arrive from surrounding communities, the mob of teens swarmed across the street and into a nearby gas station.

Outside the gates, police were overwhelmed. More fighting. One gun found. A stolen vehicle retrieved. Drugs.
A nearby Taco Bell was also ransacked. More theft, fighting and property destruction.

These kind of flash mobs/random acts of violence are increasingly common.

What makes this incident so worrying is that so many of the teens in this mob were middle schoolers.

“Our main concern is this: These are middle- to high-school kids who have guns, who are shooting guns, who are robbing people, driving stolen cars, and they have drugs in their car,” Lt. Paul Hopkins, a spokesman with the Orange County Sheriff’s Office said. “You need to know where your kids are at all times.”

Middle school encompasses grades six through eight. These are 11-, 12- and 13-year-olds.

What are parents doing letting their 13-year-olds go to movies (not to mention R-rated ones) on their own?

Where are the parents?!

More than 70 percent of all black births in America are to unmarried women.

This is a radical development fundamentally reshaping society. As the Wall Street Journal reported (February 10):

Will liberals ever forgive Daniel Patrick Moynihan for being right?Next month marks the 50th anniversary of the future senator’s report on the black family, the controversial document issued while he served as an assistant secretary in President Lyndon Johnson’s Labor Department. Moynihan highlighted troubling cultural trends among inner-city blacks, with a special focus on the increasing number of fatherless homes.”The fundamental problem is that of family structure,” wrote Moynihan, who had a doctorate in sociology. “The evidence—not final but powerfully persuasive—is that the Negro family in the urban ghettos is crumbling.”For his troubles, Moynihan was denounced as a victim-blaming racist bent on undermining the civil-rights movement. Even worse, writes Harvard’s Paul Peterson in the current issue of the journal Education Next, Moynihan’s “findings were totally ignored by those who designed public policies at the time.” The Great Society architects would go on to expand old programs or formulate new ones that exacerbated the problems Moynihan identified. Marriage was penalized and single parenting was subsidized. In effect, the government paid mothers to keep fathers out of the home—and paid them well. …History has proved that Moynihan was on to something. When the report was released, about 25 percent of black children and 5 percent of white children lived in a household headed by a single mother. During the next 20 years the black percentage would double and the racial gap would widen. Today more than 70 percent of all black births are to unmarried women, twice the white percentage.

Studies have consistently shown that by virtually every quantifiable measure of success, children from intact families outperform those from broken homes.The wsj article continues:

For decades research has shown that the likelihood of teen pregnancy, drug abuse, dropping out of school, and many other social problems grew dramatically when fathers were absent. One of the most comprehensive studies ever done on juvenile delinquency—by William Comanor and Llad Phillips of the University of California-Santa Barbara, in 2002—concluded that “the most critical factor affecting the prospect that a male youth will encounter the criminal justice system is the presence of his father in the home.”Ultimately, the Moynihan report was an attempt to have an honest conversation about family breakdown and black pathology …. Faulting ghetto culture for ghetto outcomes remains largely taboo among those who have turned bad behavior into a symbol of racial authenticity. …And while the civil-rights establishment and black political leaders continue to deny it, family structure offers a much more plausible explanation of these outcomes than does residual white racism.In 2012, the poverty rate for all blacks was more than 28 percent, but for married black couples it was 8.4 percent and has been in the single digits for two decades. Just 8 percent of children raised by married couples live in poverty, compared with 40 percent of children raised by single mothers.

According to Edward Gibbon, the number one reason for the fall of Rome was broken families.
So while the evidence tying poverty, academic underperformance, incarceration rates, depression, drug usage, alcohol abuse, abortions and a whole host of other maladies to broken families is preponderous, America’s leaders continue to be more concerned about political correctness than the welfare of people and the nation.

Those who value the lessons of history can look to the Roman Empire for precedent. The Roman Empire thrived when its citizens valued marriage and family. It fell when they stopped cherishing it.

In his masterpiece, History of the Decline and Fall of the Roman Empire, renowned historian Edward Gibbon identified five major causes that contributed to the fall of the Roman Empire: first, the breakdown of the family; second, increased taxation; third, an insatiable craving for pleasure; fourth, an unsustainable buildup of armaments; fifth, the decay of religion.

According to Gibbons, the number one reason for the fall of Rome was broken families. Surely there is a lesson here for America. Gerald Flurry writes in “The Modern Romans”:

History shows that the strength of any nation depends on the strength of its families. Family is the rock-solid foundation on which a country’s superstructure is erected. That was the case for both America and Britain.Rome in its heyday was affluent and had the mightiest army on Earth, just like America today. Back then, when people talked about Rome falling, they were scoffed at and scorned. When Seneca, the famous Roman, warned that Rome would fall—even telling people why it would fall—the people ignored him. In the words of Seneca, one of the foundational reasons Rome would fall was the fact that “they divorce in order to remarry. They marry in order to divorce.”Seneca warned that family breakdown would destroy the Roman Empire!

The United States, like Rome, was built on a foundation of strong, stable families. At its founding, divorce was hardly heard of. Single motherhood by choice was unheard of. As recently as 50 years ago only 5 percent of white households were headed by a single mother. For black families it was only one quarter of families.

Now 70 percent of black children are born to unwed mothers. Additional others born to intact families, unfortunately, eventually experience the ravages of divorce. Families must be fixed if America is to survive.

Far more than any other factor—including white racism—broken families are the source of the problems facing black communities.

And more than any other factor, the breakdown in America’s families, which is a symptom of America’s eroding morals, is the cause of America’s economic, social and geopolitical problems.

History shows the foundational reason for the fall of the Roman Empire. We ignore this history at our peril.

For more lessons from the Fall of Rome, read “The Modern Romans.”