Britain would do well to remember these overlooked warnings from one of its most revered poets. 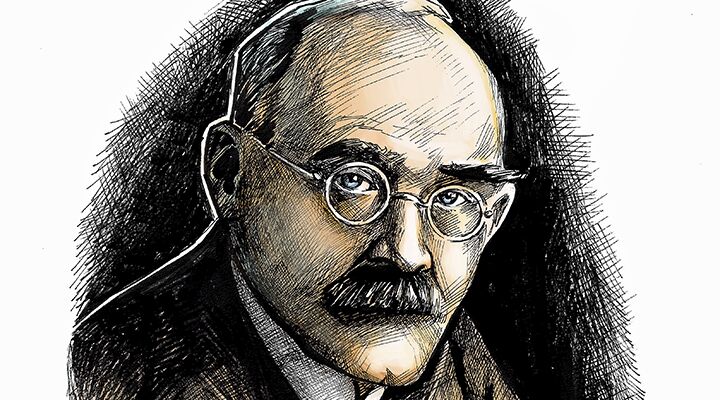 Britain would do well to remember these overlooked warnings from one of its most revered poets.

“My own belief is that there will be no more wars among the six great powers.” That’s what prominent British commentator H. N. Brailsford wrote in March 1914. Less than six months later, he would be proven horribly, horribly wrong.

Multitudes of British leaders, writers and thinkers shared Brailsford’s complacency. But some foresaw the catastrophe to come. The most famous of these secular prophets was Sir Winston Churchill, who prepared the British Navy for the first Great War and later called the nation to arms ahead of the second.

But Britain had another prophet: Rudyard Kipling.

Today, Kipling is remembered for two accomplishments. Children remember his stories, particularly The Jungle Book, or a Disney cartoon version of it. Adults recall his poem “If,” a stirring call to manly virtue, voted Britain’s favorite poem in 1995.

But Kipling’s work went far beyond those two works. This man warned Britain of catastrophe to come. In his poems, he accurately forecast World War i, foretold the British Empire’s fall, and exposed the roots of disasters Britain suffers even today.

Kipling’s warnings were so accurate that in 1919, after the war, Atlantic magazine published an article titled “The Remarkable Rightness of Rudyard Kipling”: “[R]ight, because time has sustained him against scoffers; remarkable, because no one originally expected that particular kind of rightness from him,” as its author, Katharine Fullerton Gerould, put it.

Kipling’s poems of warning were his least popular, and were often rejected, mocked and ridiculed. That was before the guns of August roared across Europe. Even after that, few paid them any attention. But particularly in light of current problems, these warnings reveal extraordinary insight. Britons—and all of us—would do well to remember them.

Kipling published a huge number of poems. Summarizing them all would be impossible. But perhaps a poor approximation of a summary can be approached by grouping his warnings under three main themes. The first is the one where he was most obviously right: military complacency.

Throughout his career, Kipling spoke up for the British soldier. Alfred Lord Tennyson’s tale of death and glory in “The Charge of the Light Brigade” is perhaps the most famous poem of the Victorian era. But Kipling wrote another 40 years later called “The Last of the Light Brigade,” which said, in essence, You’ve immortalized these men in verse, but now they are dying of starvation on the streets! Can you please give them something to eat?

After the turn of the century, these rebukes became more urgent. As far ahead as 1902, Kipling saw that an all-out war with Germany was on its way. Building a large army of well-trained troops was no longer a matter of soldiers’ welfare—it was about national survival.

At the heart of this warning was an anthology of poems published in 1903 titled The Five Nations. Its dedication warns of the storms ahead:

Ere rivers league against the landIn piratry of flood,

Yet who will note,

And washen carcass and the returning well,

Trumpet what these poor heralds strove to tell?

This anthology contains many poems of different styles, yet it returns again and again to this theme of complacency in the face of coming tragedy. “The Dykes”—a poem about the earthworks or levees that keep the sea from flooding low-lying areas—is dedicated entirely to this warning:

Now, it may fall, we have slain our sons, as our fathers we have betrayed.

At the center of The Five Nations is perhaps Kipling’s most prophetic poem, “The Islanders.” It begins:

Fenced by your careful fathers, ringed by your leaden seas,

Long did ye wake in quiet and long lie down at ease;

Till ye made a sport of your shrunken hosts and a toy of your armed men.

Ye set your leisure before their toil and your lusts above their need.

A warning so direct is not easy reading. “How many thousands of people felt that, in writing ‘The Islanders,’ Kipling had destroyed his own reputation!” lamented the Atlantic in 1919. But by then Kipling’s warning had been proven all too true: “Do ye wait for the spattered shrapnel ere ye learn how a gun is laid? For the low, red glare to southward when the raided coast-towns burn?” Kipling lambasts the Islanders for the time and money they lavish on their sports and distractions, and how little they devote to the military that guaranteed safe sleep at night.

“Given to strong delusion, wholly believing a lie,” he wrote, “Ye saw that the land lay fenceless, and ye let the months go by.”

Kipling was a man of empire. He was born in India, lived for a while in America and traveled the world. He had a grand vision of what the British Empire could do for the world. Yet time and again he was confronted by people in England who thought only of a comfortable life at home. It was Kipling who coined the phrase “What should they know of England, who only England know?”

In “Pharaoh and the Sergeant”—also from The Five Nations anthology—Kipling laments that England “thinks her Empire still is the Strand and Holborn Hill,” both places in London.

To Kipling, the empire had tremendous power as a force for good. Some in the colonies worked vigorously to that end, while being completely ignored by London. Too many at home had no desire to do good in far-flung corners of the globe, and instead devoted their passions to ease and sport.

George Orwell, like Kipling, grew up in India, was educated in England and then went back out to the colonies. He grew to resent the empire, having witnessed many of its abuses in his formative years. To him, empire meant exploitation. Yet even he recognized a separate vision in Kipling’s writings. “The mass of the people, in the [1890s] as now, were anti-militarist, bored by the empire, and only unconsciously patriotic,” he wrote in a famous essay about Kipling in 1942. Kipling tried to reignite a grander vision of empire in that mass of the people—and failed. To Orwell, the empire was all about making money, but he clearly saw that for Kipling, it stood for something far grander.

Queen Victoria’s Diamond Jubilee in 1897 was a moment of great celebration throughout the empire. Yet Kipling chose that moment to launch one of his earliest and most somber warnings. The poem, titled “Recessional,” and reprinted in The Five Nations anthology, begins:

God of our fathers, known of old,

Lord of our far-flung battle-line,

Beneath whose awful Hand we hold

Dominion over palm and pine

Lord God of Hosts, be with us yet,

The poem seems to draw heavily on Psalm 127, that begins “Except the Lord build the house, they labour in vain that build it: except the Lord keep the city, the watchman waketh but in vain.” It warns that despite all of the empire’s glories, without God, it could crumble into nothing overnight:

Far-called, our navies melt away;

On dune and headland sinks the fire:

Lo, all our pomp of yesterday

Is one with Nineveh and Tyre!

Judge of the Nations, spare us yet,

Despite all of Kipling’s calls for military preparedness and deterrence attacks, he clearly saw that Britain’s real hope lay not in weapons but in God. He concludes:

For heathen heart that puts her trust

In reeking tube and iron shard,

All valiant dust that builds on dust,

And guarding, calls not Thee to guard,

For frantic boast and foolish word

Thy Mercy on Thy People, Lord!

He gives this same warning in “The Islanders.” Again drawing from the Bible, he asks sarcastically:

No doubt but ye are the People; who shall make you afraid?

Also your gods are many; no doubt but your gods shall aid.

Idols of greasy altars built for the body’s ease;

These shall come down to the battle and snatch you from under the rods?

Toward the end of his life, as the Nazi Party rose to power in Germany, Kipling expressed his hatred for what it represented and opposed Germany’s reassertion of its power. He was accused of being a Germanophobe. He died in 1936. Three years later, he was again proven horribly right by the outbreak of World War ii.

Today he is proved righter still. The British Empire is indeed “one with Nineveh and Tyre.” Britain’s naval might is gone. And Germany is again the preeminent power in Europe. Few would pay them heed, but Kipling’s warnings resound mightily.

Who Will Hear the Warning?

The Trumpet gives a warning based on Bible prophecy. But throughout history, Britain and America have had their “secular prophets.” In a sense, knowledge of history and human nature can indicate what is coming even without the aid of the Bible.

Kipling was not a prophet of God, and he was not a perfect man. In today’s era of political correctness, critics focus more often on his failings than on his “extraordinary rightness.” Yet these are merely the three most prominent warnings, among many, that we would do well to heed.

No doubt but ye are the People—your throne is above the King’s.

Whoso speaks in your presence must say acceptable things:

Bowing the head in worship, bending the knee in fear—

Bringing the word well smoothen—such as a King should hear.

That is the preface to “The Islanders,” and it holds true today. Britain lapped up Kipling’s smoother things, but the nation rejected his warnings. Today, however—more than ever—Britain needs to hear these “unacceptable things.” Once again, nothing less than world war is on the horizon.