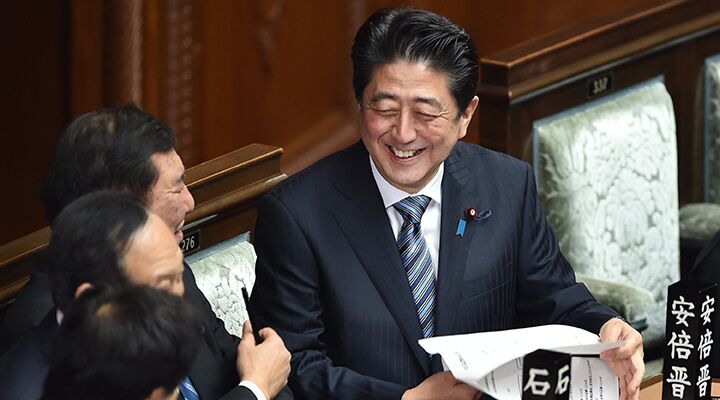 Shinzo Abe was reelected as Japan’s prime minister on December 24. With his power consolidated, he reiterated his pledge to rewrite the country’s pacifist constitution.

Earlier this month, after Mr. Abe called a snap vote in response to sluggish economic growth reports, his Liberal Democratic Party (ldp) enjoyed a landslide win in the general election. Now, Abe’s position within the ldp is firm. And since a general election isn’t required for another four years, he could become one of the longest-serving prime ministers in Japan’s history.

After the vote results were announced, Abe said he and the ldp “want to revise the Constitution.” He called it the party’s most “cherished wish.”

But is it a noble wish? For the answer, consider why the pacifist constitution was written.

Before and during World War ii, Japan authored some of the worst brutality in mankind’s history. The wartime ruthlessness and fanaticism of the Japanese was largely driven by their belief that their emperor, Hirohito, was a god destined to rule the world. State Shinto became the national religion, promoting an ideology of Japanese racial superiority and the notion that Hirohito was divinity. These ideologies became the mantras of school curricula and were trumpeted in Japan’s civic life. The toxicity of this faith made many Japanese virtually incapable of surrendering—even in the face of insurmountable odds.

In 1941, Japan’s top military leader Hideki Tojo said, “Do not live in shame as a prisoner. Die, and leave no ignominious crime behind you.” Some Japanese soldiers were taken captive, but the majority obeyed Tojo and the doctrines of State Shinto, either fighting until they were killed or committing suicide. The fanatic commitment spread even to Japanese civilians, which was perhaps most evident when American troops moving onto Saipan in June 1944 saw mothers clutching their infants and flinging themselves off cliffs rather than risk being captured.

By the end of World War ii, Japan had been fighting for 14 years. Almost 3 million Japanese were dead, with many more injured or gravely ill. Most of the population was starving, and the nation lay in ruins. But even then, nothing short of two atomic bombs was able to bring a halt to Japan’s perverse military fanaticism.

It was then, in the immediate aftermath of that tragic history, that the United States occupied Japan and drafted its constitution. U.S. officials, led by Gen. Douglas MacArthur, wanted to ensure that bellicose fanaticism would not rise again in Japan, so they included Article 9 in the new Constitution. This clause outlawed war as a means for Japan to settle international disputes.

“We are committed,” MacArthur said, “to see that the Japanese people are liberated from this condition of slavery.”

As part of this liberation, MacArthur’s team also outlawed emperor worship and disbanded State Shinto. They led Emperor Hirohito to deliver his famous “Declaration of Humanity,” a radio address to Japan in which he renounced the nationalistic interpretation of Shinto, denounced the idea that he was a god, and said the Japanese are not a superior race.

MacArthur spent more than five years helping the defeated and destroyed country to heal, rebuild and transform itself into a democracy. The transformation was accomplished with remarkable speed. Just after leaving Japan in 1951, MacArthur bestowed the highest praise upon the Japanese people:

The Japanese people, since the war, have undergone the greatest reformation recorded in modern history. With a commendable will, eagerness to learn, and marked capacity to understand, they have, from the ashes left in war’s wake, erected in Japan an edifice dedicated to the supremacy of individual liberty and personal dignity …. I know of no nation more serene, orderly, and industrious nor in which higher hopes can be entertained for future constructive service in the advance of the human race.

Sixty-three years have passed since then, and it is undeniable that Japan’s cultural and technological contributions have enriched the human experience for billions around the globe, as MacArthur predicted. Yet many are concerned about Mr. Abe’s most “cherished wish,” and what its fulfillment could portend for Japan, Asia and the world.

Intensifying the concern is the fact that Abe is a member of the Shinto Association of Spiritual Leadership (sas), the political arm of the Association of Shinto Shrines. Besides working to scrap Article 9, the sas is committed to blurring the separation of religion and state. It is dedicated to “educational reforms” that would better nurture a “love of country” among Japanese youth.

Yutaka Yuzawa, the sas director, believes it is time to undo the changes brought about during the U.S. occupation. “After the war, there was an atmosphere that considered all aspects of the pre-war era bad,” he said. “Policies were adopted weakening the relationship between the imperial household and the people … and the most fundamental elements of Japanese history were not taught in the schools.”

University of Auckland Prof. Mark Mullins told Reuters that both “Nippon Kaigi and the Shinto Association basically believe the Occupation period brought about … the forced removal of Shinto traditions from public space and public institutions. For them, this was authentic Japanese identity … and to be an independent and authentic Japan again those things need to be restored.”

Would Abe really endorse a return to something as arcane and archaic as emperor worship? A clue to the answer came in October 2013 after he became the first Japanese prime minister since World War ii to participate in a ceremony at the Ise Shrine, the holiest of Japan’s Shinto institutions. The ceremony entails rebuilding the shrine and bringing idols to it that represent the emperor’s divine ancestry.

John Breen, a professor at the International Research Center for Japanese Studies in Kyoto, said the implications of Abe’s participation in the Ise Shrine ceremony are enormous. “Without anyone blinking an eye … it became a state rite,” he said.

The issue of constitutional revision has divided the Japanese public, but more than 80 percent of the nation’s parliament is in favor of revision. Just after the December 24 vote result was announced, Abe further bolstered the pro-revision camp by appointing a defense chief well known for his nationalism and desire to shed the postwar pacifism.

Since Abe’s ruling coalition now has a two-thirds supermajority in the lower house, the year ahead could be a vital one for those working toward a constitutional revision and a restoration of Japan’s “lost values.”

If Mr. Abe’s wish comes true, it could push Japan back into the toxic blending of nationalism, Shinto myth and militarism. This could lead to the dismantling of barriers established to prevent another world war.

General MacArthur and the other officials who disbanded State Shinto and wrote Japan’s pacifist constitution after World War ii were experienced and world wise. If they were around today, they would recognize the shifting tides in Japanese leadership and take action to reverse them.