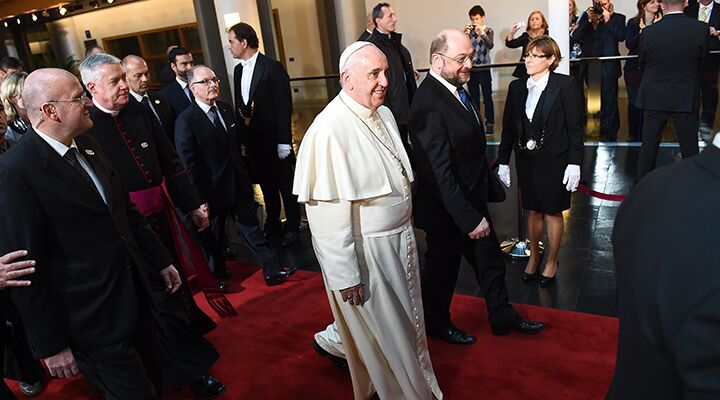 On November 25, Pope Francis became the first pontiff in nearly 30 years to visit the European Parliament. Pope John Paul ii was the last pope to address the Parliament in what he described as a “special moment in the history of this Continent.” His ecstatic visit in 1988 came as communism was crumbling in Eastern Europe, providing a great opportunity for Europe to unite. Pope Francis, not so jubilant on his recent visit, delivered a somber message to the European Parliament.

Two weeks earlier the Continent had celebrated the 25th anniversary of the fall of the Berlin Wall. That event has become the symbol of Europeans unifying. But Pope Francis believes the Continent has not done enough.

“Despite a larger and stronger Union, Europe seems to give the impression of being somewhat elderly and haggard, feeling less and less a protagonist in a world which frequently regards it with aloofness, mistrust and even, at times, suspicion,” the pope said.

He said that “the great ideas which once inspired Europe seem to have lost their attraction, only to be replaced by the bureaucratic technicalities of its institutions.”

Pope Francis is disappointed at the lack of European influence in the world. He wants Europe to become a major contributor in world politics. Even though Pope Francis is the first non-European pope in the last 1,300 years (and the first Jesuit pope), he still has grand visions for the Continent. One of them is to dispel the EU’s “grandma” image. The pope wants European unity that will lead to a vibrant, robust and forceful conglomeration of nations.

Pope Francis sees what is happening around the world—Russia and China uniting, the Islamic State rampaging through the Middle East, Iran building nuclear warheads—and realizes that a complacent, inwardly focused Europe is ill-equipped to deal with these problems.

Pope Francis told the European Parliament how it could fix the disconnect with the world. The solution for European sleepiness is to “recover a sense of values and mission, one foundation for which is religious conviction. A Europe which is no longer open to the transcendent dimension of life is a Europe which risks losing its own soul.”

Pope Francis’s solution is to embrace religion, specifically Roman Catholicism. Religion has been sliding in Europe in recent decades and the pope hopes to reverse such a trend. The pope wants the leaders to return to their religious roots. Pope Francis says Europeans must not forget the 2,000-year-old history between Christianity and Europe.

“We see this in the beauty of our cities, and even more in the beauty of the many works of charity and constructive cooperation throughout this Continent,” Pope Francis said. “This history, in large part, must still be written. It is our present and our future. It is our identity. Europe urgently needs to recover its true features in order to grow, as its founders intended, in peace and harmony, since it is not yet free of conflicts.”

The pope’s comments should send shivers down the spines of history students. Most people don’t realize the destruction caused throughout history by the Catholic Church. Here is a modern pope rallying the European continent to unite behind it and return to its “glory days.”

Four days after addressing the European Parliament, Pope Francis traveled to Turkey to visit the head of the Orthodox Church, Patriarch Bartholomew. On this trip the pope focused on improving relations between the two churches. There has been a great divide between the two churches since 1054 when the Eastern Orthodox Church split from the Roman Catholic Church over the authority of the pope.

That divide might soon be a thing of the past as the two leaders work together to improve relations. One factor helping to unite these two is the plight of Christians throughout the Middle East. The slaughter of Christians at the hand of Islamic State terrorists is helping the churches unite against a common enemy—Islam.

Before the ouster of Saddam Hussein in 2003, it has been estimated there were over 1 million Iraqi Christians. Over the last 11 years, the Christian population has shrunk to 250,000. Over the past decade, 70 churches have been attacked and 900 Christians killed by beheading, crucifixion and other means. A century ago, Christians still made up 30 percent of the Middle East’s population—now that number is around 3 percent and falling.

Discussing the plight of the Middle Eastern Christians, Deutsche Welle reported, “[N]ow their suffering is uniting the two churches—what they call martyrdom is enough to overcome all confessional hurdles.”

Eastern Orthodox Patriarch Bartholomew, calling for unity between the two churches, said, “We no longer have the luxury of isolated action. The modern persecutors of Christians do not ask which church their victims belong to. The unity that concerns us is regrettably already occurring in certain regions of the world through the blood of martyrdom.”

As the Islamic State works to establish a Christian-free caliphate, it is actually helping heal the split of these two churches, and so leading to the fulfillment of Bible prophecy. Isaiah 47:8 reveals that the Catholic Church’s Protestant “daughters” will return to the Catholic fold. Pope Francis could use the Islamic State atrocities to rally these churches to unify with him against the enemy.

Continue to watch as Pope Francis rallies Europe and the Christian world to unite. Watch as his cries for European unity become louder and more leaders start to take notice. The Catholic Church has held many empires together throughout history. Soon, it will again provide the glue to unite a European superpower.

To further understand where the pope’s actions are leading, read “The ‘Holy’ in the Holy Roman Empire.”