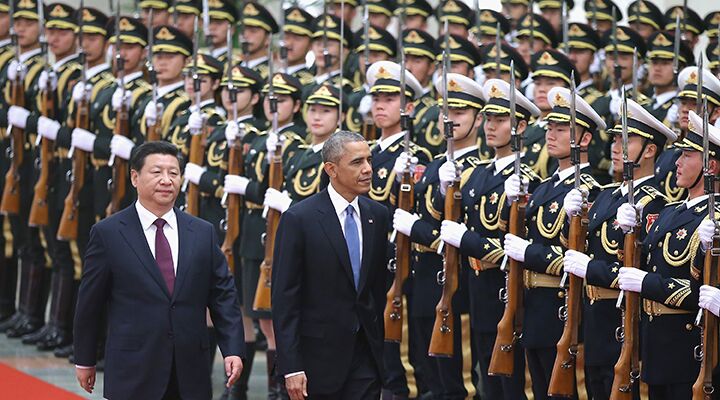 United States President Barack Obama was all smiles last week at the Asia-Pacific Economic Cooperation (apec) summit hosted by China. During the festivities, Chinese President Xi Jinping and President Obama agreed to limit greenhouse emissions. This was one deal the Chinese leader has been very reluctant to act upon for the past few years. President Obama said the greenhouse deal was “a major milestone in the U.S.-China relationship.” He stated that “when the U.S. and China are able to work together effectively, the whole world benefits.”

America and China are working together—but contrary to President Obama’s assertions, it is in the worst possible way.

Also at the summit, President Obama called upon Xi to curtail Chinese cyberattacks on American assets. Last year, China’s involvement in attacking and stealing from American corporations came to light in a February 2013 report released by Mandiant, a cybersecurity company. The report showed that over the past five years, members of the Chinese military have hacked more than 100 Mandiant clients. Many of the hacked companies are based in the U.S.

How did China respond? During the summit, China’s military hosted a major arms show in the southern city of Zhuhai. The main attraction of the event was the debut of China’s new J-31 stealth fighter jet. This is China’s second radar-evading warplane.

Its unveiling during the apec summit was no coincidence. The J-31 fighter jet happens to be a well-known product of stolen Lockheed Martin F-35 Joint Strike Fighter technology.

For China to showcase this jet during President Obama’s summit was a slap in America’s face. While America’s president calls for a halt on cyberattacks, China flaunts the fruits of its cyber handiwork.

The Wall Street Journal reported, “Having pilfered terabytes of data about the F-35’s design and operational capabilities, Beijing scheduled the J-31’s maiden flight as if to underscore that it robs America blind with impunity.”

In a U.S. Department of Defense report about China’s military developments this year, the Pentagon said the stealth fighter aircraft is vital for China’s air force to evolve from mostly territorial armed forces to developing the ability to launch both offensive and defensive operations.

Experts have said that the development of the J-31 stealth aircraft will allow China to launch both offensive and defensive operations. This could prove decisive as China seeks to project its power throughout the East China and South China seas region.

America and China are working together, but it is a one-way relationship where American companies do the work of designing and developing technology while China benefits by stealing it.

China’s continued theft of American trade and military secrets exposes America’s cyber weakness. However, China is unlikely to deliver the knockout blow to America. Read “The Penetrable Fortress” to understand what the Bible says about America’s reliance on technology.