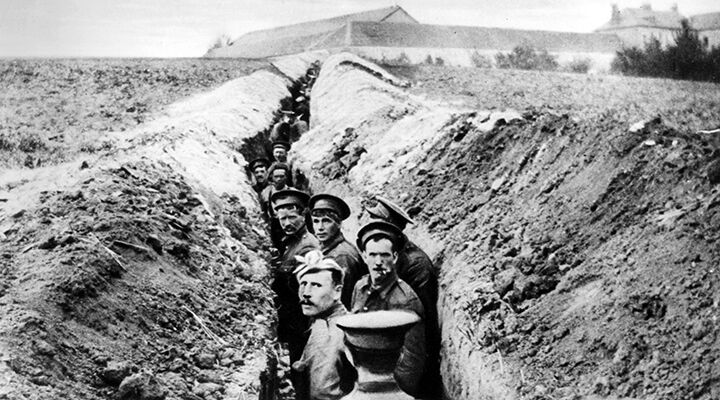 On this day, much of the Anglosphere is conducting memorial services around the world for Remembrance Day, also known as Veterans Day. In the 11th month, on the 11th day, in the 11th hour, the so-called war to end all wars—World War i—finally ended in Europe.

On that day in 1918, the most destructive and comprehensive war ever fought up to that point in man’s history came to an end when the armistice was enacted between the Triple Alliance and the Triple Entente. Ever since, the British Commonwealth and the United States have honored that moment.

This memorial honors the millions who died defending their nations—and the freedom of Western civilization—from an imperialistic aggressor. A generation later, the same call to duty would summon their sons, and they would again triumph over the forces of evil.

The day is meant to encapsulate the idea that freedom is not free, and must be defended from those who challenge it. It is about memorializing the courage and character that each citizen of our nations should emulate. It is about never forgetting the noblest action a human is capable of in this life: the laying down of his life for others.

It is about never forgetting the noblest action a human is capable of in this life: the laying down of his life for others.

I have been a part of a Remembrance Day ceremony almost every year of my life. As a Canadian subject of the crown, I am also the progeny of a father who served in the Canadian Armed Forces, a grandfather who served in the Canadian Navy, and a great-grandfather who served as a medic in the First World War, where he saw service in Russia when the West rendered assistance to fight the Red Russians. I fully believe we should honor those who defend our nations and ideals from our enemies and that we must always be vigilant to uphold their memory and example.

However, while it is a day to pay respect to the fallen and treasure the successes of our nations, there is a far greater message we should draw from Remembrance Day: a warning from the Almighty God.

World War i saw the introduction of total war and the industrialization of armed conflict. Most historians ascribe the massive loss of life in the war to the introduction of new devices of death. Except for a small inkling gained from the American Civil War, few had any idea how these changes would affect a large conflict. However, it would be a mistake to attribute all the pain and suffering of the war to impersonal technological advancement.

When a total of 8.5 million people die, we must ask some weighty questions. Just in the Battle of the Somme, the British Army lost 420,000 men. That is more men than the United States has lost in war in its entire history. The casualty rate during the Battle of the Somme was nearly 124 an hour. When such a disaster strikes your nation, should that not lead to some introspection? When half a million die in a few months, shouldn’t a people question whether they are truly being blessed?

The generation we lost from that war paid the price so that we after them could learn a powerful lesson. Will you listen to this warning? Or will you allow their lives to be spent in vain?

But if ye will not hearken unto me, and will not do all these commandments; And if ye shall despise my statutes, or if your soul abhor my judgments, so that ye will not do all my commandments, but that ye break my covenant: I also will do this unto you; I will even appoint over you terror, consumption, and the burning ague, that shall consume the eyes, and cause sorrow of heart: and ye shall sow your seed in vain, for your enemies shall eat it. And I will set my face against you, and ye shall be slain before your enemies: they that hate you shall reign over you; and ye shall flee when none pursueth you.

Will you listen to this warning? Or will you allow their lives to be spent in vain?

When you understand the Bible’s prophecies, you come to realize that World War i was actually just the first drink of a bitter cup our peoples will drink when these curses are fully realized. During that war, Anglo-Saxon strength was brutalized on the anvil of our enemies. Why would this curse be pronounced upon us? Because we have strayed from the key to national prosperity: obedience to God! The cause of national calamity is sin.

Remembrance Day marks the anniversary of one of the major warnings before the descent of the Anglosphere. To this day, our peoples have not learned that lesson, and thus God began fulfilling those scriptures directly after World War ii.

However, there is a great degree of human nobility in this history of World War i that should not be brushed aside. The brave men and women who died were meeting the consequences of national sin, but none can say there was a faint heart among them. In Empire, Niall Ferguson writes this regarding the First World War:

It was the staggering cost of fighting these imperial rivals that ultimately ruined the British Empire. In other words, the empire was dismantled not because it had oppressed subject peoples for centuries, but because it took up arms for just a few years against far more oppressive empires. It did the right thing, regardless of the cost.

They did fight for a noble cause, and paid the ultimate price giving us the opportunity to learn this lesson: that God blesses for obedience and curses for disobedience. This applies to you as an individual, and to your nation. As Herbert W. Armstrong wrote in The United States and Britain in Prophecy:

Most people, we know only too well, will take this serious warning lightly—put it out of mind—turn to other immediate interests of no importance by comparison! That is why a loving, just, all-wise, all-powerful God is going to take away from them these unimportant counter-interests, and apply such intensified correction that they shall, finally, come to their senses, and turn to Him and His way which will bring them eternal happiness and abundant blessings!But you need not have to suffer this intensified correction, greater than any trouble ever suffered by humans.By God’s direction and authority, I have laid the truth before you! To neglect it will be tragic beyond imagination! To heed it will bring blessings, happiness and glory beyond description!The decision is now yours!

The Great War was a warning from God and a rebuke to the modern nations of Israel for being rebellious sons. There are even sterner days ahead. However, all is not lost. To learn about the awesome hope that lies at the heart of this warning message, read The United States and Britain in Prophecy.