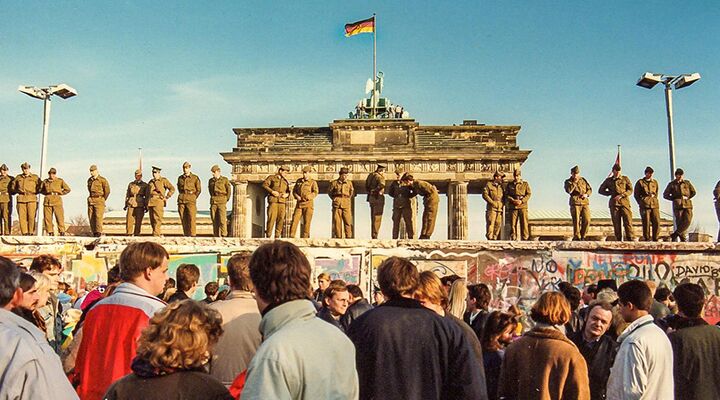 Written by late Trumpet columnist Ron Fraser on Nov. 9, 2009, on the 20th anniversary of the Berlin Wall’s fall, an event that changed modern history.

“The world has been in furious flux since the fall of the Berlin Wall. A host of factors has driven it into this ever-accelerating ‘fast-forward mode’” (Europe’s World, Autumn 2009).

In one neat sentence, that statement succinctly points to a singular historical event that occurred on Nov. 9, 1989, shattering the postwar global order.

The fall of the Berlin Wall catalyzed world events into an unprecedented fast-paced mode that has brought within its wake such massive geopolitical changes as few could have envisioned during the waning years of the Cold War.

Madeleine Albright, describing the effect of the fracturing of the Berlin Wall, declared that on that fateful day, “In the space of a historical eyewink, everything changed” (Parade, Nov. 8, 2009).

And change it did, each change seemingly stimulating yet another, until a whole battery of increasingly accelerating changes occurring within just two decades took Germany from being a once divided nation, symbolized by the ugly bulk of a concrete barrier fracturing its wartime capital city, to the status of the most powerful economic and political force dominating a new imperialist global power, the European Union.

Even more significant, that first crack in the Berlin Wall was a harbinger of the fracturing of the alliance that had held together the Western powers in a grand alliance for over 40 years following World War ii.

The fall of the Berlin Wall triggered the beginning of a realignment of German international relations from their Cold War transatlantic orientation to an increasingly Eurasian alignment. German-Foreign-Policy.com reports (Oct. 29, 2009):

The close economic alliance with the usa had characterized the years of the confrontation between the two systems. Since the upheavals between 1989 and 1991, German business has been eastward oriented to a growing degree. Today, the trade volume between Germany and Eastern Europe is reaching €307 billion annually, constituting 17 percent of German foreign trade, while the German-U.S. trade volume sank to €117.5 billion, a mere 6.5 percent. Germany has its eyes particularly focused on Russian energy resources, to which German companies have obtained direct access in the meantime. For some time, Berlin has been using again this shift in economic weights for its traditional seesaw policy between East and West. And anti-American forces are openly proposing an alliance with Russia.

But it’s not only the breaching of the Atlantic alliance that the fall of the Berlin Wall triggered. Scarcely had Germany united east with west when, barely one year later, its very first foreign-policy initiative as a united nation was to fracture in turn the whole Yugoslav Republic by its recognition of Croatia and Slovenia as separate nation-states apart from the greater Yugoslav federation. This triggered the illegal Balkan wars, the effects of which were to progressively garner the Balkan nations into the German-dominated EU as that imperialist Union’s first colonies.

One further result of the Balkan wars was the relaunching of the German Luftwaffe into combat, with ready Anglo-American assent. Since then the German navy has drawn blood off the coast of Somalia, and most recently, the German combat force in Afghanistan engaged Taliban forces in active combat.

Then, just days before the celebrations marking the anniversary of the singular event that catalyzed Germany’s reunification, the nation’s Defense Minister Baron Karl-Theodor zu Guttenberg broke a longstanding taboo by affirming that Germany was in reality at war in Afghanistan. It’s the first time that the term “war” has been used to describe postwar German combat roles.

That the fall of the Berlin Wall engendered vast changes in the global order is a matter now of recorded history. No one could have forecast that these events would become today’s reality when Germany lay in ashes over 65 years ago.

Yet, there was one voice crying out amid all of the confusion in the postwar world who tenaciously pointed not only to the inevitability of the fall of the Berlin Wall, but who so precisely prophesied the events that have followed—and he died fully four years before the wall fell.

If there is one outstanding prophecy we can point to that Herbert Armstrong stressed, time and time again, it was that Germany would rise from the ashes of war to dominate Europe, once again, and head a seventh and final resurrection of that old “Holy” Roman Empire.

Toward the end of his life, Herbert Armstrong came to understand that great world events prophesied in the Bible to follow Nazi Germany’s attempt to seize global power had been delayed, and delayed for a specific reason—so that the original, unpolluted, simple and straightforward gospel message of Jesus Christ could be delivered to all nations in fulfillment of Christ’s prophecy in Matthew 24:14.

Herbert Armstrong lived to fulfill that prophecy, visiting and creating friendships with most of the world leaders of his time in the process. Upon his death, the very American president who challenged Mikhail Gorbachev to “tear down that wall,” President Ronald Reagan, declared that Herbert Armstrong “contributed to sharing the word of the Lord with his community and with people throughout the nation.”

During his long ministry, Mr. Armstrong frequently met with emperors, kings, U.S. congressmen, members of the British Parliament, members of the Japanese Diet, leading educators, and businessmen. He had a positive influence on some of the most powerful and influential leaders of the 20th century.

Yet there was one friendship that Herbert Armstrong especially marked in relation to the revival of Germany following World War ii. That was his relationship with the outstanding Bavarian politician Franz Josef Strauss, known in his time as the “strong man of Europe.”

Two leaders in Europe produced, a few years ago, two different plans for union. The former archduke, Otto von Habsburg, of Austria and the “strong man of Europe,” Dr. Franz Josef Strauss of Munich. I know the latter well. He has been a dinner guest in my home.Five years ago I felt, personally, that the more likely plan that might come to fruition was that of the former archduke of Habsburg, but the most likely man to head such a union was Franz Josef Strauss. However, we all become a year older every year, and there has been so much delay that a younger man may now head up such a European union.

That plan for a united Europe put forward by Otto von Habsburg bears a remarkable resemblance to that which has evolved, treaty by treaty, into today’s European Union. Concerning Franz Josef Strauss, the man who was his personal aide at the time Mr. Armstrong wrote the above was fellow Bavarian Edmund Stoiber. He barely missed election as Germany’s chancellor in 2005. Stoiber subsequently declined the post of economics minister in Chancellor Merkel’s cabinet and then obtained the position of EU high representative with the brief to cut waste from the EU budget by reducing its excessive red tape. Trained in the Strauss mold, Stoiber may well have been a contender for the task described by Mr. Armstrong as heading an imperial European Union. Yet, as Mr. Armstrong noted, “we all become a year older every year, and … a younger man may now head up such a European union.”

There is now a “younger man” on the scene whose political star has risen with startling speed: Baron zu Guttenberg.

Zu Guttenberg has overnight become the darling of Germany’s military officer cadre. As the World Socialist Website wrote on Nov. 7, 2009:

The appointment of the new defense minister, Karl-Theodor zu Guttenberg (Christian Social Union, csu), unleashed a storm of enthusiasm in the German officer corps, according to Spiegel Online.On the evening that he took the oath of office, Guttenberg gave a short speech to employees at the Ministry of Defense …. Guttenberg was welcomed by the assembled military as one of their own. His noble title and his aristocratic family’s 800-year-old tradition played a not-insignificant role in their response.There is hardly another country in the world in which the influence of the aristocratic caste in the army—as well as in other areas of society—has remained as strong as in Germany. … The aristocratic elite has played a devastating role in German history.

That same aristocratic elite are destined to play a devastating role in Germany’s future, as prophesied for over 40 years by Herbert Armstrong and as this magazine has consistently forecast over the past two decades since the fall of the Berlin Wall. Yet we have forecast these events as great signs of the imminence of the intervention of Almighty God in the affairs of man to impose on all humankind the world peace that has eluded man from the time of his rebellion in the Garden of Eden.

Our confidence in the coming of that great era of peace between God and man, and among all humankind, is underpinned by our faith in the Author of the “more sure word of prophecy” (2 Peter 1:19). It is that same faith and confidence that led a great man of God to prophesy, decades before it became a reality, that Germany would rise from the ashes of defeat, that the Berlin Wall would fall and Germany would unite to dominate Europe in a final resurrection of that old iron imperial power, the Holy Roman Empire.

The anniversary of the fall of the Berlin Wall is a milestone in the restoration of German power. To the gainsayers who still doubt the inevitability of the coming imposition of European imperial power under the leadership of Rome and Berlin, we simply say, if you doubt, then just watch. But as you watch, you would do well to heed the words of your Maker, “Take ye heed, watch and pray, for ye know not when the time is” (Mark 13:33).