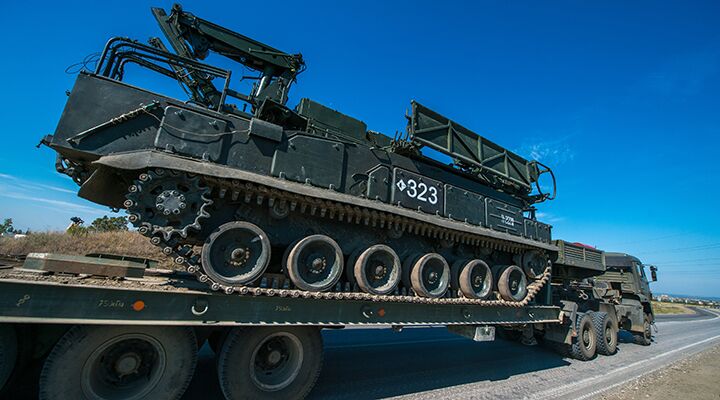 Russian President Vladimir Putin warned the West August 28 not to interfere with Ukraine.

During an international summit this year Russian Prime Minister Dmitry Medvedev and New Zealand John Key were engaged in a friendly lunchtime conversation when Key jokingly asked Medvedev, “How long would it take a missile to get out from Moscow to NZ?” Medvedev replied, “Don’t worry, I’ll let you know before it happens.”

President Putin has, on at least three occasions this year, reminded the world that Russia has 5,000 nuclear warheads. He is warning the world not to interfere with Ukraine else it risks angering the Russian bear, which is willing to use its nuclear power.

Putin repeatedly blames the foreign policy of United States President Barack Obama for the Ukraine crisis. He says America’s unwise use of its power and its attempt to “remake the whole world based on its interests” caused the Ukrainian crisis.

President Putin has, on at least three occasions this year, reminded the world that Russia has 5,000 nuclear warheads.
Mr. Putin denies any Russian involvement in sparking civil unrest in Ukraine. “Statements that Russia is trying to reinstate some sort of empire, that it is encroaching on the sovereignty of its neighbors, are groundless” he said. Putin admitted: “The bear isn’t asking anyone for permission. The bear is considered a strong and very traditional animal … [but] will not surrender.”

Putin shows no sign of surrender. In fact, he has gone on the offensive, testing how far he can push before the world responds. Nations bordering Russia have noticed an increase in national airspace violations by the Russian Air Force.

Russia’s provocations have increased to an extent that America and its allies are scrambling their defense assets almost daily. Russia has repeatedly broken the national airspace of the Baltic nations. nato intercepted 19 Russian planes on October 29 that ventured far outside Russia’s airspace.

But it is not just the Baltic, or even the Black Sea region, where Russia is testing a nation’s will to react to aggression. Japanese fighter jets’ interception of Russian military aircraft has doubled over the last six months. Japan conducted 324 scrambles this year up to September; the same time period last year saw 163 scrambles.

Russia has also reneged on the start treaty it signed with the U.S. in 2010. The treaty was to ensure neither nation had more than 1,550 nuclear warheads deployed at anytime. Russia had 1,499 deployed in 2012, while the U.S. had 1,722. The United States has worked since 2010 to dispose of its nuclear warheads, while Russia has actually added over 140 to its arsenal. Russia also announced a $700 billion plan to overhaul its nuclear arsenal by 2020.

“What’s going on is a radical escalation of aggressive Russian muscle flexing and posturing designed to demonstrate that Russia is no longer a defeated power of the Cold War era,” Ariel Cohen said, who heads the Center for Energy, National Resources and Geopolitics at the Institute for the Analysis of Global Security in Washington, d.c. “The more we retreat, the more we are encouraging Russia to behave in a more aggressive way.”

Russia also announced a $700 billion plan to overhaul its nuclear arsenal by 2020.
The Washington Times reported on a conversation with Steve Ganyard, president of Avascent International, a global security consulting firm in Washington: “Russia’s moves reflect Mr. Putin’s desire to bring about a new era of cat-and-mouse-style games that were ‘prevalent in the Cold War.’ … Mr. Putin is engaged in a ploy to garner international recognition as a way to reassure Russian citizens that their nation remains a formidable military power, he said. … ‘Putin knows how to play domestic politics,’ Mr. Ganyard added. ‘Right now, one of his platforms is to return Russia to its glory, and part of that means its military glory’ by bolstering the ‘myth of the Red Army saving the motherland.’”

Read Trumpet editor in chief Gerald Flurry’s article “Is Vladimir Putin the Prophesied ‘Prince of Rosh’?” to see where Russia’s aggression will lead.