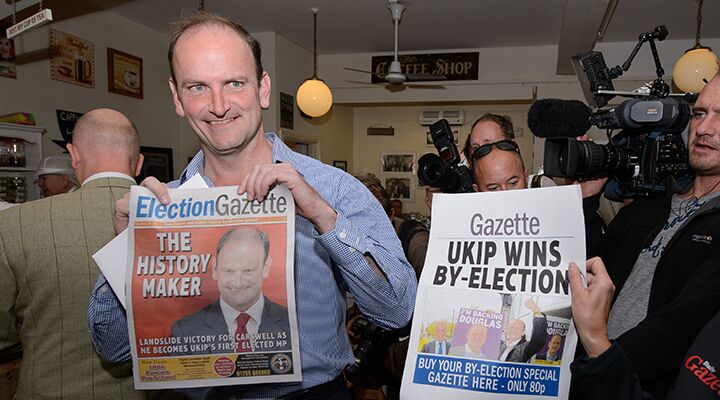 Britain’s anti-EU party gets its first elected member of Parliament, while the EU makes itself more unpopular than ever.

The British political party dedicated to getting the country out of the European Union, the UK Independence Party (ukip), had its first member elected to Parliament, October 9. And it’s on target to see its second elected in just a few weeks.

“An Earthquake Called UKIP Hits Britain” read the title of Wall Street Journal’s coverage of the subject. It’s right—this is the biggest political earthquake to hit Britain for a generation or more.

For years ukip has done well in local and European elections, only to remain invisible on the national scene. In a first-past-the-post system, such as Britain and America’s, it is very hard for a new party to break out nationally, but now ukip has done it, and with style. Its victory—winning roughly 60 percent of the vote—set a new record for the largest increase in votes for any party ever in a United Kingdom by-election.

UKIP’s victory—winning roughly 60 percent of the vote—set a new record for the largest increase in votes for any party ever in a United Kingdom by-election.
This exceptional victory came in exceptional circumstances. On August 28, M.P. Douglas Carswell announced he was quitting the Conservative Party and would join ukip. Because he was elected as a Conservative candidate, he felt he should get approval for this change from his voters. So he resigned his parliamentary seat, triggering what is called a “by-election” in the United Kingdom, and stood again as the ukip candidate.

In normal circumstances, he would be expected to lose. People usually vote for a party, not a candidate. Instead Carswell won by a landslide.

The same day came close to bringing even bigger news. In a second by-election, ukip came within just a few hundred votes of winning a seat where the Labor Party had formerly held a 6,000-strong majority. Almost everyone expected Carswell’s victory. Far fewer anticipated ukip coming within 2 percentage points of victory in Heywood and Middleton. Here, ukip had no nationally renown politician with a substantial local following leading it. Moreover, it was fighting to take the Labor Party’s seat, when traditionally it’s better at taking votes from Conservatives.

And ukip is on target to do it again on November 20. A few weeks after Carswell switched sides, fellow Conservative M.P. Mark Reckless announced he would also join ukip, again holding a by-election to get his voters’ approval. While Reckless does not have the same level of personal support as Carswell, he is still on target to win comfortably. If he does, Carswell warns it could trigger another round of Conservative defections to ukip.

“The timing could scarcely be worse” for UK Prime Minister David Cameron, wrote the EU Observer, as Cameron tries to persuade right-of-center voters to support Britain’s continued membership of the EU. The latest demand is just more wind in the sails of ukip.

Even ahead of that latest demand, United States think tank Stratfor pointed to the shift in Britain:

[ukip leader Nigel] Farage’s rapid rise in British politics has moved the entire British political spectrum toward more euroskeptical positions, and no major party is impervious to ukip’s influence. Britain’s political fragmentation could lead to a hung parliament after the general elections and make ukip a key player in post-election negotiations. In any case, Britain’s traditional party system dominated by the Tories [Conservatives] and Labor will undergo a tough test in 2015.

Already we see ukip forcing Britain to take a tougher line on Europe. “If people think I am paying that bill on 1 December, they have another thing coming,” Cameron said. “It is not going to happen.” bbc reported that Cameron “sounded like a prime minister unleashed; by turns scornful and furious, lectern thumping, downright angry.” Paying the bill without, at the very least, a symbolic concession is politically impossible.

This will probably be the biggest impact of ukip. While it has come a long way, it’s unlikely to win more than a handful of seats at the next general election. But it is forcing the major parties to take an increasingly stronger stance against the EU.

Today’s ukip isn’t solely focused on Europe. It’s trying to appeal to anyone who feels let down or abandoned by the current political system. It’s clear that today’s current politicians don’t have the answers and some voters are turning to ukip instead.

Regardless of the voting tactics of those involved, the political shift shows that more and more Britons are strongly opposed to their country’s position in Europe.
Nonetheless, the biggest influence it exerts on British leadership is against Europe. Now, not only does David Cameron have to worry about voters deserting him if he isn’t tough enough, but his own M.P.s could leave too—especially now that Carswell has proven they can still get elected after doing so.

There is intense debate in Britain’s political circles about what this means for the next election. Will ukip split the right-wing vote, allowing the left-wing and pro-EU Labor Party to win? Or will ukip voters return to the Conservative fold when it really matters?

The future of Britain’s government rests on this question. But the future of its EU membership does not. Regardless of the voting tactics of those involved, the political shift shows that more and more Britons are strongly opposed to their country’s position in Europe. Either side may win, but this pressure to get out of the EU won’t change. Even the Labor Party has committed to holding a referendum before any new powers are given to Brussels.

One way or another—either pulled out by angry voters or pushed out by an impatient EU—Britain will not remain in the EU.

“Britain is going to look back on Monday, Jan. 1, 1973, in all probability, as a most tragically historic date—a date fraught with ominous potentialities!” wrote Herbert W. Armstrong, founder of the Trumpet’s predecessor, the Plain Truth. “For that date marked the United Kingdom’s entry into the European Community.”

“Probably Germany will lead and dominate the coming United States of Europe,” Mr. Armstrong wrote. “But britain will be no part of it!”

This too is already coming to pass. Germany leads and dominates the eurozone today. Another economic hiccup could soon push it into forming the United States of Europe. It is clear that Britain will not be part of that.

Mr. Armstrong understood enough about Europe, Britain and Bible prophecy to make these forecasts beginning nearly 70 years ago. For more information on what else he knew about Britain’s future, read “Britain Was Warned!” from our free booklet He Was Right.