Beautiful proof of a universal truth 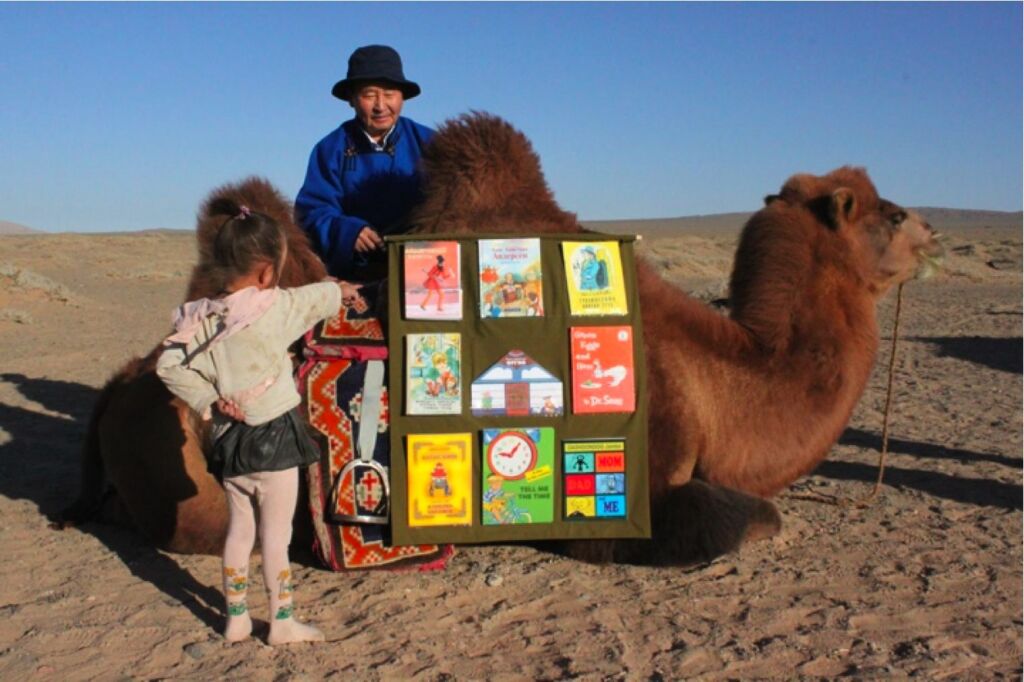 Beautiful proof of a universal truth

What do you do if you are a young book lover? You go to the library. But what if you live in the rural regions of the Gobi desert? Your situation would be bleak—were it not for Dashdondog Jamba. He has devoted his life to writing, translating, publishing and transporting books to children all over Mongolia with his Children’s Mobile Library.

“I can’t remember how many trips I have made—I have lost count,” Mr. Jamba said. “Sometimes we travel by camel, sometimes on horseback, and with horse carts or ox carts; we now also have our van.”

Over the last 20 years, his library has traveled 50,000 miles through every province of Mongolia—mostly before the van was part of the operation. Jamba’s assistants are his wife and his son. They often spend several days in one place to give as many children as possible a chance to read their books.

“[It] is a little different from other libraries,” Jamba says. “The walls of this reading room are made of mountains covered with forest, the roof is blue sky, the floor is a flower-covered steppe, and the reading light bulb is the sun.”

Over the last 20 years, his library has traveled 50,000 miles through every province of Mongolia—mostly before the van was part of the operation.
Jamba created his library in the early 1990s, shortly after Mongolia abandoned communism and adopted free-market economics. Life in Mongolia changed dramatically, mostly for the good. But organizations focused on children’s literature fared badly. They were viewed as profitless, so no private investors wanted to take them over. Most children’s libraries were converted into banks.

Jamba tried to keep the libraries alive. “Even though I had fought against it,” he said, “my efforts didn’t work.” But he didn’t give up. He determined that if the children had no place to go get books, he would get the books to the children.

Ever since, he’s been writing children’s books, translating foreign youth literature into Mongolian, and bringing books to children who would otherwise never read them. Several of his original books have earned the Best Book of Mongolia award. Some of his stories have been put to song. Some have been made into movies. In 2006, his mobile library won the prestigious ibby-Asahi Reading Promotion Award.

But more remarkable than any of these honors is the fact that Jamba has done the lion’s share of his work without financial compensation. Most of the money for publishing, translating, printing and mobilizing comes from his own pocket—from profits he earns from selling his original books. “Sometimes people ask me how it benefits me [as] an individual. With respect to money, there is no benefit,” he said.

Because of this, Mr. Jamba deserves recognition as a man who lives the way of give.

The Trumpet offered to pay Jamba for permission to reprint the photograph above (which he owns), or to donate to one of his projects. He not only declined, but insisted on mailing us a complimentary assortment of his books.

Last year, researchers analyzing data from 40 studies found undeniable proof that people who give to others by volunteering had significantly lower levels of depression, and far higher levels of “life satisfaction.”
What effect has 20 years of generous giving had on Jamba? Has it worn him down? Has it jaded him? No, it has made him happy! “My devotion for children is my happiness,” he said. Author Ramendra Kumar spent time with Jamba in 2009, and said: “With his cherubic smile, bright sparkling eyes and an endearing countenance he inspires trust. No wonder wherever he has gone in Mongolia he has succeeded in winning the love, affection and confidence of children” (BoloKids, Sept. 7, 2009).

How can constant giving and scant receiving make a man happy?

Mr. Jamba’s happiness is no anomaly. Last year, researchers analyzing data from 40 studies found undeniable proof that people who give to others by volunteering had significantly lower levels of depression, and far higher levels of “life satisfaction.” One study called “Do Good Live Well” found that 68 percent of people who volunteer report feeling physically healthier, 73 percent experience lower stress levels, and 89 percent enjoy an improved sense of well-being.

These studies—and Mr. Jamba’s generosity-generated joy—confirm a fundamental truth about human beings, which Jesus Christ taught during His ministry on Earth: “It is more blessed to give than to receive” (Acts 20:35). Proverbs 11:25 adds, “A generous person will prosper; whoever refreshes others will be refreshed” (New International Version).

A person who gives becomes refreshed and happier. That’s a universal aspect of the human condition. Yet most of us fail to recognize it, calculating that we’ll be happiest if we receive and take. To put the matter to the test, focus on giving to others. Create happiness for someone. Give more to your family. Give more on the job. Then survey how you feel.

Whether you begin serving more in your home and job, or you hop on a camel and start bringing books to children, it won’t take long for you to know that it truly is more blessed to give than to receive.