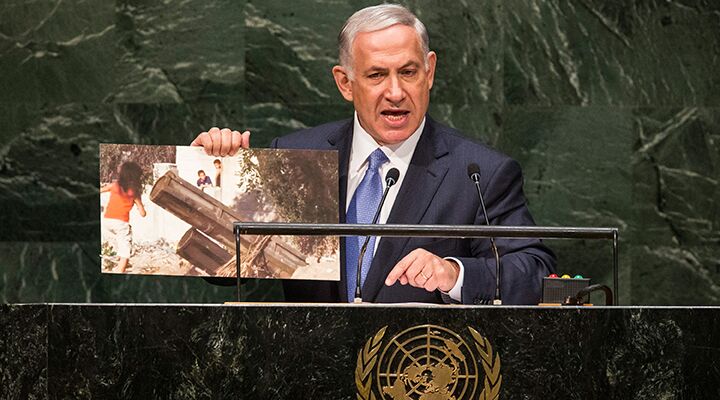 It seems the whole world is enveloped in the Islamic State smokescreen—and no wonder. Its sweeping of the Middle East in medieval-style butchery dominates headlines and spurns public outrage from all people with an ounce of humanity.

Yet amid the Islamic State melee, an even greater threat is obscured and blatantly ignored by most observers. However, one leader has not been distracted from this grave threat.

Israeli Prime Minister Benjamin Netanyahu spoke before the United Nations in New York on September 29 about the dangers of the spread of militant Islam. “The question before us is whether militant Islam will have the power to realize its unbridled ambitions,” he said. “There is one place where that could soon happen. The Islamic State … of Iran.”

While many world leaders addressed and condemned the Islamic State in their UN presentations (including Iranian President Hassan Rouhani), Netanyahu took the opportunity to expose Iran as the chief threat to the West. And his speech wasn’t just an outrageous tirade against the Shiite country—as Palestinian Authority President Mahmoud Abbas’s was against Israel.

Not only is Iran the terrorist-sponsoring kingpin in the region—Iran is a nuclear threshold state.
Netanyahu put forward clear, precise facts, quoting Iranian officials’ own words. He made clear Islamic Republic’s mission, quoting founder Ayatollah Khomeini: “We will export our revolution to the entire world, until the cry ‘there is no god but Allah’ will echo throughout the world over.” Netanyahu spared no sympathies for Rouhani:

Iran’s President Rouhani stood here last week and shed crocodile tears over what he called the ‘globalization of terrorism.’ Maybe he should spare us those phony tears, and have a word instead with the commanders of Iran’s Revolutionary Guards. He could ask them to call off Iran’s global terror campaign, which has included attacks in two dozen countries, on five continents, since 2011 alone.

Not only is Iran the terrorist-sponsoring kingpin in the region, it is a nuclear threshold state. News of the Islamic State has stifled reports of the negotiations’ miserable failure to stop Iran’s nuclear program. Iran’s centrifuges are still running—two years after Netanyahu’s urgent, red-line-diagram speech at the UN.

Will anyone listen to Netanyahu? Probably not. Not while Iran is being led by the deceptively peaceable and word-wise Rouhani, whom Netanyahu addressed last year at the UN as a “wolf in sheep’s clothing.” Rouhani himself was a major player in negotiations for Iran’s nuclear program in the early 2000s, and was criticized by Olli Heinonen, a senior official of the International Atomic Energy Agency, for using the nuclear talks to “buy time to advance Iran’s program.” Rouhani is not like his loud and brash predecessor, Mahmoud Ahmadinejad. He knows how to buy time putting on a show.

Would you let Islamic State build a heavy water reactor? Would you let Islamic State develop intercontinental ballistic missiles? Of course you wouldn’t. Then you mustn’t let the Islamic State of Iran do those things either.
Benjamin Netanyahu
And the West is giving in. Rather than work to shut down Iran’s centrifuges, there is talk of the U.S. potentially meeting Iran “close to half way,” allowing up to 4,500 of its known 9,400 centrifuges to remain spinning, according to two anonymous diplomats. British Prime Minister David Cameron recently met with Rouhani, marking the first meeting between leaders of these two countries since the 1979 revolution. The West’s stance on Iran is softening, as talk of of cooperation against Islamic State is bandied about.

Netanyahu does not believe Iran’s sweet talk will continue much longer. At his recent UN message, he declared:

Once Iran produces atomic bombs, all the charm and all the smiles will suddenly disappear. They’ll just vanish. It’s then that the ayatollahs will show their true face and unleash their aggressive fanaticism on the entire world. There is only one responsible course of action to address this threat: Iran’s nuclear military capabilities must be fully dismantled.

Netanyahu makes a good point about the ayatollahs. Wordsmith Rouhani isn’t even the one steering the Islamic Republic, is he? It is the supreme leader, his eminence grand Ayatollah Ali Hosseini Khamenei. He and his predecessor, Ayatollah Khomeini, have succeeded in leading Iran as a radical Islamic state bent on destroying the “Great Satan,” America, and the “Little Satan,” Israel. If Iran becomes nuclear-capable, its destructive capacity could make the actions of Islamic State look like child’s play.

The Trumpet has consistently warned of Iran’s intentions for over 20 years. That is because Bible prophecy reveals this powerful, radical nation will lead an alliance of Islamic nations as the “king of the south.”

Nothing has changed for Iran—perhaps only the softened verbiage coming from President Rouhani. Once the smoke from the Islamic State blows over, perhaps a very different Iran will have emerged, having slipped through the fingers of the international community: a nuclear-armed Islamic State—of Iran.