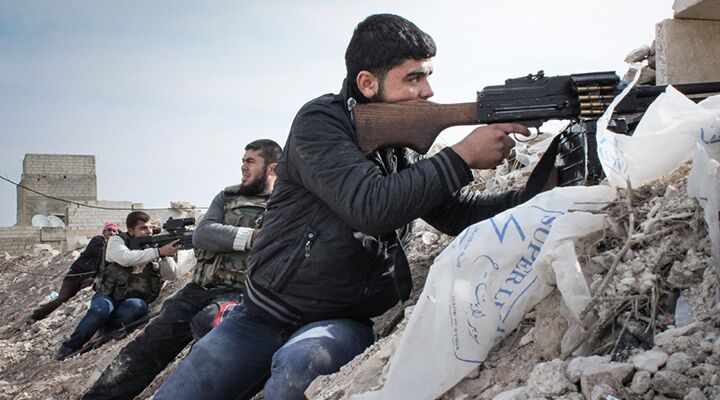 You know it’s bad when politicians transcend traditional party bickering and vote overwhelmingly for intervention in a war-ravaged nation in the Middle East tinderbox.

The House of Representatives voted 273-to-156 on September 17 in favor of legislation to authorize the Obama administration to arm and train “moderate” Syrian rebels against Islamic State. The following day, the Senate voted 78-to-22 for the same authorization. The United States can now legally spend $500 million to arm and train about 5,000 “vetted” rebels in Syria. The Islamic State has about 20,000 militants in Syria.

That’s the extent to which the Syrian crisis has deteriorated.

As recently as August, President Barack Obama was against arming any of Syria’s rebels. In an interview with the New York Times, Obama said,

With respect to Syria, it has always been a fantasy—this idea that we could provide some light arms or even more sophisticated arms to what was essentially an opposition made up of former doctors, farmers, pharmacists and so forth, and that they were going to be able to battle not only a well-armed state but also a well-armed state backed by Russia, backed by Iran, a battle-hardened Hezbollah, that was never in the cards.

Now, that “fantasy” is reality, and Congress is supporting it.

The United States can now legally spend $500 million to arm and train about 5,000 “vetted” rebels in Syria.
At a Senate Foreign Relations Committee hearing on the day before casting his “yes” vote, Sen. Marco Rubio cited “credible reports” that asserted that the biggest enemy facing the “moderate” opposition forces in Syria is the Assad regime—not necessarily the Islamic State. Those reports said that Syrian President Bashar Assad’s forces were stepping up their fight against the “moderate” rebels that are battling both Assad and the Islamic State. The rationale is that eliminating the moderates would leave Assad as the only tolerable alternative for the U.S. to collaborate with against the Islamic State. As Senator Rubio said, the “moderate” rebels “may not be there for us to arm.”

When Rubio asked Secretary of State John Kerry whether the United States may need to protect those “moderate” rebels from Assad, Kerry’s response was, “[The Islamic State] first. That’s our policy.”

For over 42 months, the Syrian government has been fighting various rebel groups in a bloody civil war. The United Nation’s official death toll as of April 30, was 191,369. That included at least 8,800 children. Over 6.5 million people have been internally displaced, while another 2.7 million have fled the country.

At a September 16 Senate Armed Services Committee hearing, Gen. Martin Dempsey admitted that Assad has killed more rebels than Islamic State has. When questioned by Sen. John McCain whether the rebels the U.S. plans to train would only fight against the Islamic State and not the Assad regime, General Dempsey said he believed that “as we train them and develop a military chain of command linked to a political structure, that we can establish objectives that defer that challenge into the future. We do not have to deal with it now.”

It doesn’t bode well for the world if America’s military leaders are content with deferring problems into the future instead of preventing them from happening.

Assad is one challenge the U.S. has deferred into the future. His country has developed chemical weapons since the early 1970s. Following the U.S. invasion of Iraq in 2003, some of Saddam Hussein’s biological agents were covertly shipped across the border into Syria’s stockpiles, as Trumpet editor in chief Gerald Flurry reported in June 2004. This problem was deferred until 2013, when Assad used some of those chemical weapons on his own people. Even then, the U.S. only talked of a “very limited, very targeted, very short-term effort that degrades his capacity to deliver chemical weapons; … unbelievably small, limited kind of effort.” Now there seem to be other problems more menacing than Assad in Syria.

It doesn’t bode well for the world if America’s military leaders are content with deferring problems into the future instead of preventing them from happening.
The Islamic State too was a deferred challenge. It was allowed to morph from an Iran-supported al Qaeda in Iraq (aqi) into the Islamic “caliphate” it now claims to be.

In the hate triangle of the Assad regime, the Islamic State and the “moderate” rebels, every party is an enemy of the others. So many things could go wrong. For example:

The crisis in Syria is a disturbing spectacle of the lack of leadership in the United States, as Isaiah 3 foretold. Gone is “the mighty man, and the man of war, … and the prudent, … the captain of fifty, and the honourable man, and the counsellor” (verses 2-3). Leaders who once were against war have quickly flip-flopped and are now supporting “bad options.” It appears the U.S. is set to make the same mistakes in Syria as it did in Iraq, Afghanistan and Libya.