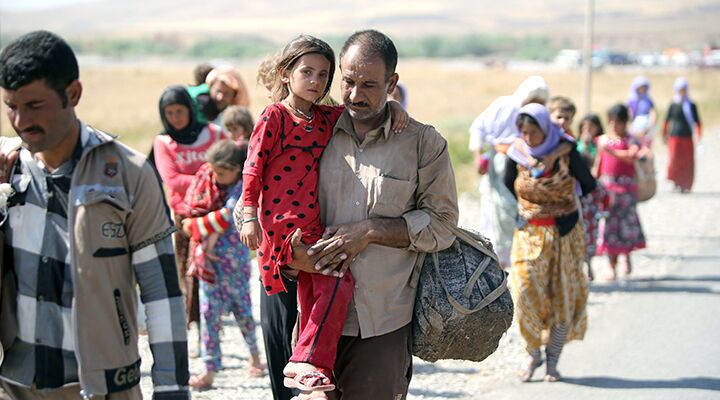 World War iii has already begun, Pope Francis reportedly said during a private meeting with a group of Jewish leaders held in his home on September 17.

Ronald S. Lauder, head of the Jewish group, explained the pope’s statements: “Francis told us privately that he believes we are in World War iii, but unlike the first two world wars, instead of happening all at once, this war is coming in stages. He said … now it is Christians who are being annihilated and the world is silent.”

Francis has reiterated his belief that the world is already in the early stages of World War iii at least two othertimes in recent weeks. His belief is formed in part by ongoing conflicts in such places as Ukraine, Gaza, Afghanistan and regions of Africa. But nothing influences his assessment as much as the atrocities that the Islamic State terrorists are committing in Iraq and Syria—primarily against Christians.

In Iraq’s Nineveh region alone, the Islamic State has driven around 200,000 Christians from their homes since early summer. Many of them now have only the clothes on their backs. The number of practicing Christians remaining in the city of Mosul is now thought to be zero—down from 10,000 at the beginning of the year. Similar exoduses are occurring in other parts of Iraq and in Syria.

Now, the pope says the violence must be stopped, even if that means by force.

The number of practicing Christians that remains in the city of Mosul is now thought to be zero—down from 10,000 at the beginning of the year.

“In these cases where there is an unjust aggression, I can only say that it is legitimate to stop the unjust aggressor,” Francis said on September 15. “I underscore the verb ‘to stop.’ I don’t say ‘bomb’ or ‘make war,’ but to ‘stop.’ … We must stop and think a little about the level of cruelty at which we have arrived. This should frighten us.”

Francis is concerned in part because the Islamic State is only accelerating a trend that has long been underway: Before the birth of Islam, Catholicism was the dominant force in many Middle Eastern nations. Even a century ago, Christians made up over 30 percent of the Middle East’s populations. Now that number is around 3 percent and quickly falling.

The Syriac and Chaldean Catholic churches of Syria and Iraq are viewed as integral bodies of the Catholic Church, and are in full communion with the bishop of Rome. The growing persecution they and other Middle Eastern Christian groups are suffering is a festering wound for the Roman Catholic Church.

At present, Francis’s calls for action against Christian-slaying Muslims remain fairly restrained. But Bible prophecy shows that the Vatican will soon go far beyond restrained statements to confront radical Islam.

The growing persecution suffered by Syriac and Chaldean Catholic churches and other Middle Eastern Christian groups is a festering wound for the Roman Catholic Church.
The rising tide of Jihad is drowning the Middle East’s Christians, but the Church will soon take violent action to reverse this trend. Look at the history of the Crusades. It shows that both Catholics and Muslims are fiercely determined to control the Holy Land and surrounding regions. Prophecy makes plain that a Vatican-guided Europe will once again resurrect the specter of those gruesome Crusades. Trumpet editor in chief Gerald Flurry said in a Sept 25 lecture that, contrary to Francis’s view, the world isn’t yet in World War iii. But he emphasized that we are rapidly approaching it.

In the final crusade, the Roman Catholic Church will take its most drastic action yet against Islam.

That clash will write the bloodiest pages of mankind’s strife-ridden history. The unprecedented violence and suffering will appear to be humanity’s final chapter. But the Bible makes plain that it is actually only the last page of the prologue for mankind! Numerous prophecies show that the Third World War will be interrupted by the return of Jesus Christ. He will squelch the violence and bring Muslims, Catholics and all other men the peace that has always eluded us. At that time, under God’s law of love, Chapter One of real life will finally begin.

To understand how the exacerbating frictions in the Middle East directly lead to this beautiful and awesome future, read Jerusalem in Prophecy.