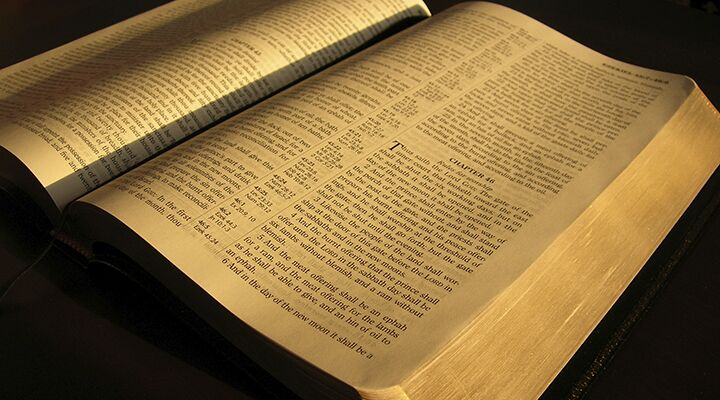 Today you can sit down whenever you want to and read news forecasts that are more than 2,000 years old. That’s the miracle that is the Holy Bible and biblical prophecy. Suppose you have proven that the Creator God exists and that the Bible is His Word. Suppose you believe that God’s prophecies in the Bible are not mystical or fictional, but statements about the future from an all-powerful Being. This leads to another question: Why would God preserve this ancient book of prophecy?

God told Jeremiah to prophesy that He would destroy the people of Judah if they did not repent. Jeremiah delivered the message, but Judah refused to repent. God allowed armies to destroy its civilization and enslave the survivors. End of story, right?

If so, there was no reason for those prophecies to be written down. Nor does it make sense that God canonized them and also preserved them from revision or loss for two millennia. Either this was just a strange and confusing exercise, or these canonized biblical prophecies were left partially or completely unfulfilled during the lifetime of the prophets who wrote them. If you believe in God and the Bible, then you have to admit that these advance reports of world events are relevant long after the prophets delivered them!

In fact, if you read what time frame the prophets specified and you put together the events they said would happen, you realize that the majority of Bible prophecy not only extends beyond biblical times, it dead-centers on our generation!

Here are three proofs why most Bible prophecy is for us today:

1) God specifies that many Bible prophecies are for the “end time.”

The book of the Prophet Daniel provides a prime example of prophecy that God has preserved far beyond Daniel’s lifetime. Daniel was a prominent Jewish captive who served in the governments of Babylon and Medo-Persia in the seventh and sixth centuries b.c. “In the third year of Cyrus king of Persia a thing was revealed unto Daniel …” Daniel 10:1 recorded. But was it revealed for his benefit or the benefit of those around him? The Bible specifies: “… and the thing was true, but the time appointed was long.”

God then proceeded to unfurl a long and detailed prophecy to Daniel. At the end of it, the prophet is told not to proclaim the message, but rather to “shut up the words, and seal the book, even to the time of the end” (Daniel 12:4). Here God explicitly explains why He had Daniel record these prophecies by writing them in a book—to save them for a later time!

When you understand the identities of the nations Daniel prophesied about, and who their descendants are, you realize that the time in question is today.

Many other prophecies specifically state they are for the end time or the latter days, such as those found in Daniel 8:23; 11:35; and Matthew 24. But many other prophecies don’t. You have to read these prophecies a little closer to see whether they were fulfilled in the prophets’ lifetimes, shortly thereafter or in our day.

2) Many Bible prophecies haven’t been fulfilled completely yet.

The Prophet Ezekiel, a contemporary of Daniel, was also a Babylonian captive when he too received revelation from God: “I was among the captives of the River Chebar … and I saw visions of God” (Ezekiel 1:1). He heard a voice command him to stand, saying, “Son of Man, I send thee to the children of Israel … and thou shalt say unto them, Thus saith the Lord God” (Ezekiel 2:1, 3-4).

Ezekiel was told to go to other nations as well: against Moab, the Philistines, Tyre and Egypt (Ezekiel 25:8, 5; 26:2-3; and 29:2). God commissioned this Jewish captive to go to Israel, as well as other nations far from his location in Babylon, but no biblical record indicates he was ever released to do the job. Ezekiel himself never reached those nations!

But Ezekiel did write down these prophecies. And God preserved them for a future time when they would come to pass.

The names that Daniel, Ezekiel, Jeremiah and others identified were ancient names: Babylon, Assyria, Israel, Judah. This is why many assume these prophecies no longer apply. But these nations and their descendants lived on, changing their languages and their names as time passed.

Take Ezekiel’s warning to Israel specifically. This captive of the Babylonian Empire received prophecies of Israel’s destruction—more than 125 years after Israel had already been destroyed and taken captive (in 721-718 b.c.). Ezekiel saw his visions in “the fifth year of King Jehoiachin’s captivity” (Ezekiel 1:2-3), which would have been 592 b.c.

Many other prophecies are like this one—unable to be fulfilled during or even immediately after the time they were given. Unless God is a liar, they will come to pass. It’s just a matter of when.

The third reason why about 90 percent of Bible prophecy is for us today is that much of prophecy is dual. Many prophecies were fulfilled during or after the lifetimes of the prophets who gave them—but they were not totally fulfilled. These partially fulfilled prophecies still have an end-time fulfillment. The best example that illustrates this is in Luke 21, when Jesus gave the very detailed Olivet prophecy.

This is one example, but duality is seen all over the Bible. There is an Old Testament and a New. There’s an old earthly Jerusalem and a new, heavenly one (Revelation 21.2). There’s a first Adam and a second Adam—Jesus Christ (1 Corinthians 15:45-47).

When you believe in God and His Bible, you realize that the Bible’s prophecies are neither mystical nor outdated. If you read them for what they say and prove them against biblical and secular history, you will find that 90 percent of biblical prophecy is aimed at our generation. To prove this principle much more fully—and to find out who the modern Israelites are—request The United States and Britain in Prophecy by Herbert W. Armstrong. Like all of our literature, it is completely free of cost or obligation.