What will happen when someone finally pulls the trigger? 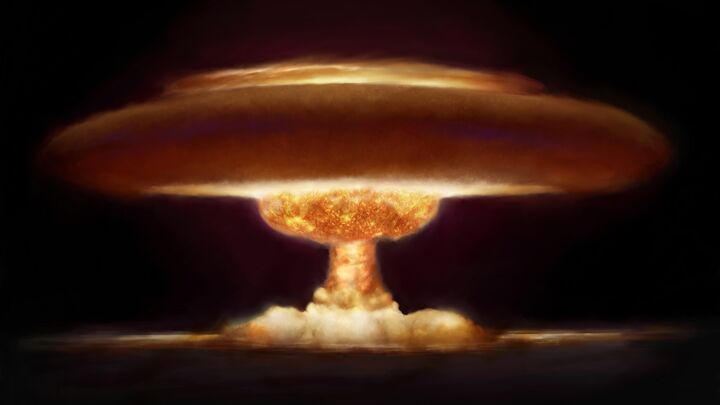 What will happen when someone finally pulls the trigger?

Nuclear bombs level cities in a flash. They kill tens of thousands of us in an instant. But what happens after that? Scientists have studied this grim question and simulated the effect a regional nuclear war would have on the atmosphere, sea and land. The answer: This cataclysm would affect everyone on the planet.

This hypothetical war, published in the March edition of Earth’s Future, included 100 nuclear detonations. Each exploded with a yield equivalent to the weapon that incinerated Hiroshima: 15,000 tons of tnt.

The conflict involved not the world’s largest nuclear power, the United States, not an increasingly belligerent Russia, not radical states like North Korea or (soon) Iran, not suicidal Islamist terrorist groups, but “simply” India and Pakistan. If these comparatively smaller nuclear-armed nations waged nuclear war against each other, millions of people would die instantly—or agonizingly slowly in the aftermath. But what would happen to you?

When you first heard news of the attack, the impact on the climate would have already begun. Researchers believe that the firestorm would throw 5.5 million tons of black carbon into the skies. This carbon would immediately begin absorbing the sun’s heat, cooling the Earth. Simulations show the average global temperature would drop 2.7 degrees Fahrenheit. In North America, Asia, Europe or the Middle East, the upcoming summer would be 7.2 degrees cooler, and winter as much as 10.8 degrees colder.

Russia’s 1961 Tsar bomb had a blast yield between 50 and 58 megatons, 1,350 to 1,570 times larger than both bombs dropped on Hiroshima and Nagasaki.
Those on the coast would especially feel the changes. Lower atmospheric temperatures would cool the oceans. Colder climates would see sea ice, which would reflect the sun’s rays and drive down temperatures even further. The upper 330 feet of the ocean would cool significantly. Scientists predict that the cooling would continue for 25 years.

Meanwhile, higher temperatures in the stratosphere because of the extra carbon would reduce rainfall and other precipitation by up to 10 percent. Droughts and wildfires would increase. Plant, animal and human life accustomed to hot, wet climates would be particularly devastated by the cold and dryness.

Ash in the atmosphere would also push temperatures on the ground lower. No matter where you live, your hometown would be significantly colder and drier. Nations would be scrambling to secure dwindling water supplies, increasing the threat of resource wars.

Lower temperatures and reduced rainfall would drastically hamper food production. Heavy frosts would decimate crops worldwide, and the growing season would shrink by 10 to 40 days each year. Even from a war waged on the other side of the world, food shortages would affect everyone, and the threat of global famine would be very real.

This was the third such simulation examining the environmental effects of a regional nuclear conflict, and the results have been consistent. This simulation accounted for just two nations detonating 100 Hiroshima-size bombs in a relatively limited area. This is anything but a worst-case scenario. Roughly 17,000 nuclear weapons exist today. The largest ever detonated, Russia’s Tsar Bomba in 1961, had a blast yield somewhere between 50 and 58 megatons. That is 1,350 to 1,570 times larger than the combined power of the bombs dropped on Hiroshima and Nagasaki. And it was designed for a yield of up to 100 megatons.

What would happen if Russia or other, more powerfully equipped nations went to war with weapons thousands of times deadlier than the ones that destroyed Hiroshima and Nagasaki?

This is the horrific reality of our world. In the August-September 1954 Plain Truth magazine, Herbert W. Armstrong wrote: “It’s time to wake up to the fact that these are not normal times! After nearly 6,000 years of comparative quiet, the whole world suddenly erupted in world-shaking violence beginning in 1914. But we have seen nothing, yet, compared to what is soon coming!

“Suddenly knowledge has increased. Scientific knowledge, technological development. Instantaneous communication, rapid transportation, frightening inventions have resulted. Man has learned at last the secret of the atom. Man has learned how to unleash powers and forces and energies of nature that can destroy human life from off this planet! … The whole Earth is now shaking with convulsions, preparatory to the mightiest happenings of Earth’s history!

“We are now in the very crisis at the close of this present evil and unhappy world!”

Sixty years later, no one can deny this reality. And the fact that man would achieve the capability of destroying himself by the millions was something Jesus Christ prophesied 2,000 years ago (Matthew 24:21-22). He said that unless these grim days were shortened, no flesh would live! Many other biblical prophecies corroborate Christ’s forecast that these terrible weapons will be used.

Thankfully, however, God promises that these days will be cut short! He won’t stand by and let His creation wipe itself out completely. Christ will intervene to save mankind from himself, and bring an end of man’s misrule over man. Christ will usher in a time of peace (Isaiah 2:4), in which weapons—nuclear and otherwise—will be extinct.