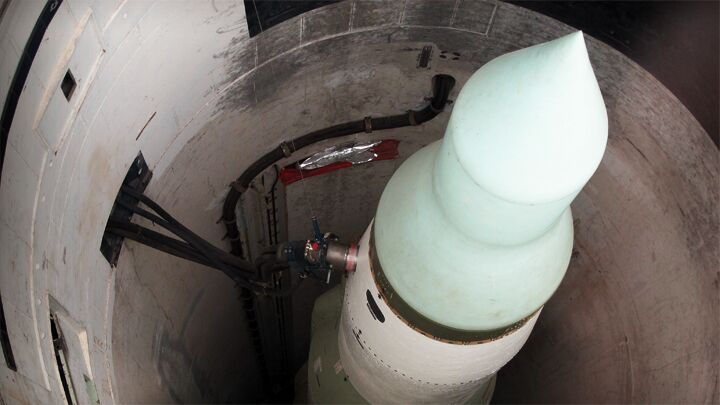 ‘The primary purpose of an army is to be ready to fight effectively at all times.’

Much has been made of the United States government’s planned downsize of the U.S. Army. It plans to scale the military back from the current 520,000 active troops to 440,000 by 2019. This cutback will make it the smallest U.S. Army since before World War ii.

But there are bigger problems you should be aware of.

The United States currently has 4,804 nuclear warheads, 450 of which are located on Air Force bases in Wyoming, Montana and North Dakota. These 450 Minuteman 3 Intercontinental Ballistic Missiles (icbms) are supposedly in constant battle-ready mode.

However, it is not the shrinking army and its lack of up-to-date technology that should worry the American public the most, but the sketchy personnel in charge.

In 2013, the Air Force relieved the two-star general in command of the 450 icbms. The general was suspended because he “exceeded the limits of accepted standards of good conduct and proper behavior” while on an official trip to Moscow. He reportedly drank during the four-day trip. Earlier in the week, a vice admiral who oversaw the military’s nuclear forces, missile defense and cyber warfare operations was also relieved of his duties because of a probe into his possible use of counterfeit chips at an Iowa casino.

The irresponsibility of our nuclear launch officers does not stop with these two high-ranking men. It has seeped down the chain of command. Earlier in 2013, two of the three missile bases under the general’s command received unsatisfactory ratings in regular annual inspections. In August, the officers at the Montana Air Force Base failed their third inspection in five years. Seventeen nuclear-launch officers in North Dakota were sidelined after they received a D in their missile launch skills inspection.

“We are, in fact, in a crisis right now,” Lt. Col. Jay Folds wrote in an email to his subordinates after receiving the results of the inspection. He said there was “rot” amongst the ranks.

In 2013, 17 nuclear-launch officers were sidelined after they received a D in their missile launch skills inspection.
The firing of these missileers was not an isolated incident. Missileers take regular tests to ensure they understand the systems they have been entrusted with operating. To pass these tests, an individual must score higher than 90 percent. In January, bbc reported that 34 officers at the Montana Air Force Base either cheated on their tests or knew others who did and did not report it. Some members were caught texting answers to fellow officers.

How safe do you feel knowing your country’s nuclear missile operators cannot get 90 percent on their tests without cheating?

Missileers were also caught violating safety guidelines. A maintenance member reported a blast door was left open while one of the crew members was sleeping. According to procedure, if a member is resting, the blast door must be closed. If the door is left open, the security of the missile and the crew is compromised. This can lead to the potential capturing of security codes by outsiders.

If the missiles here in the U.S. are vulnerable, how secure is its nuclear weaponry in Europe?

“According to a Blue Ribbon Review set up by the U.S. Air Force in 2008, most U.S. nuclear weapons storage sites in Europe do not meet U.S. Defense Department security standards,” Tom Sauer and Bob van der Zwaan wrote in a May 2011 report for the Harvard Kennedy School.

The Kleine Brogel Air Base in Belgium is one of the bases that hosts America’s tactical nuclear weapons. In 2010, the base was penetrated by peace activists. The activists climbed the perimeter fence and wandered around the base for more than an hour, videotaping their escapade. When they were finally caught, base security didn’t even confiscate the videotape.

This lax security and poor training will have terrible real-world consequences.

Do you think that the European nations that host these weapons are as indifferent about them as America is?

America is developing the attitude that these weapons will never be used. But this false sense of security is going to cause its downfall. To understand how these nuclear weapons are going to play a big part in America’s future, watch Trumpet editor in chief Gerald Flurry’s Key of David “Europe’s Dirty Secret.”