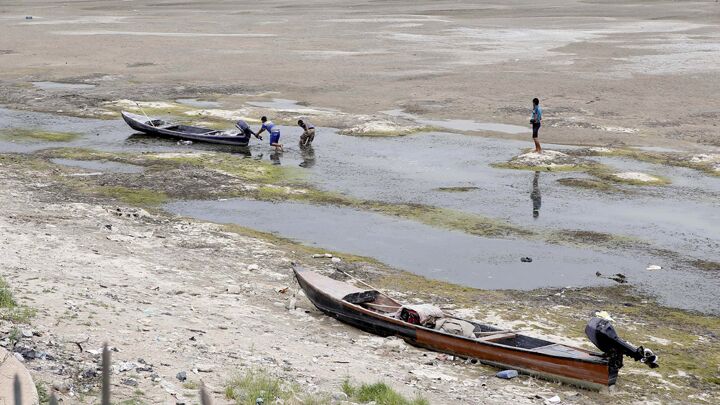 An impending water shortage threatens millions in the Middle East.

The Syrian civil war has once more taken a dire turn for the worse. Turkey has altered its strategy against its opponents, the forces of Syrian President Bashar Assad. Instead of simply aiding the Syrian rebels, Turkey is now also killing them with dehydration. The problem is, this brutal act threatens the lives of millions of Syrian and Iraqi citizens.

The crisis revolves around the Euphrates River, which quickly became the Euphrates Creek when Turkey completely cut off the water flow upstream of Syria, reported Al Akhbar on May 30. The Euphrates originates in Turkey and passes through the Atatürk Dam before flowing into Syria and Iraq. By cutting off the flow and directing it into the reservoir, Turkey has lowered water levels downstream.

Water levels in Lake Assad, Syria’s largest body of water, have dropped by 20 feet since Turkey shut off the water supply. The Euphrates hydrates large parts of Syria.

Middle East expert Daniel Pipes explained the looming disaster as genocide by way of “terminal dehydration.” Cutting off a nation’s water supply is potentially fatal in its severity and indiscriminate in its victims. The dry and arid regions of northeastern Syria will quickly empty if one of the most basic necessities of human life dries up.

The problem extends beyond Syria. Much of Iraq’s freshwater supply originates in Turkey and flows through Syria before it is collected in dams in Iraq. If these dams experience a sharp drop in water and pressure, they could collapse. Daniel Pipes said that if one of these dams, the Mosul Dam, collapsed parts of Baghdad itself would be under water within a few hours. Within two hours, the city of Mosul, home to 1.7 million Iraqis, would be a Mideast Atlantis.

Shutting down the Euphrates and endangering the lives of millions testifies to the brutality of the Syrian civil war. Both sides continue to outdo one another in barbarity. The current death toll stands at well over 150,000, but that number could multiply if the two sides continue to invent new, indiscriminate, extreme ways of killing each other.

The Syrian civil war is engulfing more and more of the Middle East as time goes on. Turkey is supporting the rebels, as are the Sunni Arab nations; Lebanon is heavily involved through Hezbollah; Iran is funding Assad’s regime; and now Iraq may take greater action as its cities are threatened by more than just terrorists.

The civil war is not over yet, and the region has far more blood to spill before the end. Massive shifts are about to occur within Syria and the Middle East. Where will the increasing tensions and brutality lead? Read editor in chief Gerald Flurry’s article “How the Syrian Crisis Will End.”