One hundred years after the outbreak of the First World War, history is repeating itself. 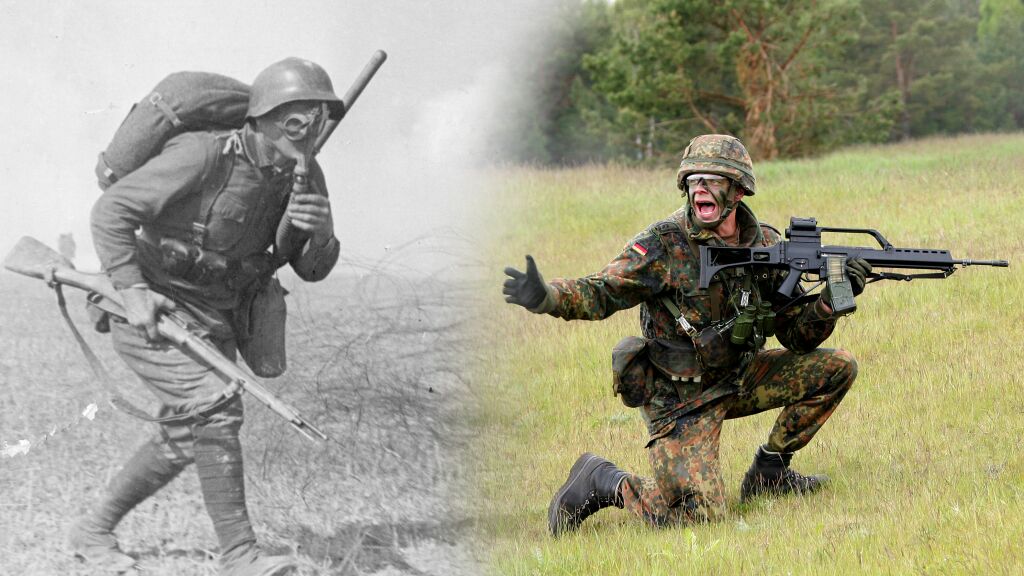 One hundred years after the outbreak of the First World War, history is repeating itself.

This year, a number of commentators have noted some sobering parallels between where we are today and where the world was 100 years ago—the year World War i started.

At that time, huge breakthroughs in technology—particularly in the fields of communication and travel—were blooming. Globalization was tying the nations of the world together more closely than ever before. The economies of nations were so integrated, many thought, that a large-scale war simply could never happen.

World war was unthinkable. The world was too sophisticated, too advanced, too civilized, to ever resort to full-scale war as a means of settling disputes.

The lead editorial in the 2013 year-end issue of the Economist spotlighted the lead-up to World War i, acknowledging Germany was the “driving force” behind the war, “looking for an excuse for a war that would allow it to dominate Europe.” It said, “Yet complacency was also to blame. Too many people, in London, Paris and elsewhere, believed that because Britain and Germany were each other’s biggest trading partners after America and there was therefore no economic logic behind the conflict, war would not happen.”

All it took was an emergent power—an instigator—coupled with a complacent attitude from Britain, the rapidly declining former “policeman” of the world—to lead to the greatest war the world had even seen. Nine million people were slaughtered, and tens of millions more were killed in the various geopolitical tragedies left in the wake of the Great War.

The parallels with today are troubling.

Complacency, Then and Now

The Economist made these comparisons between 1914 and 2014: “The United States is Britain, the superpower on the wane, unable to guarantee global security. Its main trading partner, China, plays the part of Germany, a new economic power bristling with nationalist indignation and building up its armed forces rapidly.”

China, of course, is an emerging power on today’s world scene. But Germany is not about to sit on the sidelines for this final round. Germany—not China, as the Economist believes—is the nation that will settle into its familiar role as instigator.

How do we know? How can we say with such certainty that while the Economist article highlights a lot of good points, it misses the biggest and most troubling truth of all? We know that Germany will rise to dominate Europe once more because the Bible prophesies that it will.

“[U]nless America behaves as a leader and the guarantor of the world order,” the Economist continued, “it will be inviting regional powers to test their strength by bullying neighboring countries.”

Now look at the past year: Russia, China and Iran have all tested America’s strength, sometimes with open defiance. In the absence of American influence over the world, these nations have become bolder and are now bullying their neighbors. Yet how many people are even aware of what is happening?

This complacency is the “most troubling similarity between 1914 and now,” the Economist writes. “Businesspeople today are like businesspeople then: too busy making money to notice the serpents flickering at the bottom of their trading screens.”

Christ referred to this unconcerned attitude in Matthew 24. He describes the end time just before His return as being just like the days of Noah. How? “For as in the days that were before the flood they were eating and drinking, marrying and giving in marriage, until the day that [Noah] entered into the ark,” He said, “And knew not until the flood came, and took them all away; so shall also the coming of the Son of man be” (verses 38-39). People didn’t even know utter destruction was coming! They had no clue.

The Second World War ended with the development and use of the nuclear bomb. A world war where many nations - some of which sponsor terrorism - start out with nuclear weapons is an unparalleled nightmare!
Gerald R. Flurry, February, 2014 Philadelphia Trumpet
Margaret MacMillan authored a Brookings Institution essay titled “The Rhyme of History: Lessons of the Great War” that also points to the recurring cycle of world war. She wrote, “We have entered a new and potentially perilous era. There are now nine countries with nuclear arsenals, including Pakistan, a fractious if not failing state, and North Korea, which has proved itself as reckless as it is repressive. Depending on whether Iran gets the bomb, numerous other states—including Japan perhaps—are likely to exercise their own nuclear options. That would make for a very dangerous world indeed, which could lead to a re-creation of the kind of tinderbox that exploded in the Balkans a hundred years ago—only this time with mushroom clouds” (Dec. 14, 2013).

These are not the panicked ravings of an ultra-conservative alarmist. This is a respected history professor who can see that dangerous powers are once again on the rise. And this time, with nuclear weapons on the table, the consequences of another world war portend a far greater destruction.

“The Second World War ended with the development and use of the nuclear bomb,” my father wrote in our February Trumpet issue. “A world war where many nations—some of which sponsor terrorism—start out with nuclear weapons is an unparalleled nightmare! We can’t even imagine how bad it will be!”

Can we begin to get a sense of what Christ was talking about in Matthew 24? Also speaking of the time just before His return, He says, “For then shall be great tribulation, such as was not since the beginning of the world to this time, no, nor ever shall be” (verse 21).

Yes, history and patterns of history are repeating themselves. We can already see that with history’s first two world wars. But the magnitude of destruction of this third round will be unlike anything ever seen, or that ever will be seen. So says your Bible.

What If Nobody Stopped It?

“And except those days should be shortened, there should no flesh be saved: but for the elect’s sake those days shall be shortened,” Christ continued (verse 22). Conditions will get so bad that if this prophesied great war were to continue, mankind would cease to exist. But God says He will cut the destruction short. Christ must return to Earth, as He has said He will, to personally put a stop to it!

“These problems are almost too horrifying to even contemplate,” my father continued. “That is why most people ignore the potential for nuclear war. But we won’t be able to ignore it for much longer. Biblical prophecy makes that plain” (ibid). It’s right there in your Bible, straight from Jesus’s mouth. Mainstream media dismisses any mention of Bible prophecy, but why aren’t more theologians talking about these prophecies of Christ?

Jeremiah 30 also prophesies of this time period, a time of “trembling, of fear, and not of peace” (verse 5). “[W]herefore do I see every man with his hands on his loins, as a woman in travail, and all faces are turned into paleness?” Jeremiah wrote. “Alas! for that day is great, so that none is like it: it is even the time of Jacob’s trouble; but he shall be saved out of it” (verses 6-7).

Jacob (Esau’s brother) had the name Jacob before he was converted and his name was changed to Israel. “Jacob’s trouble” refers to the trouble in the U.S. and British nations mainly. And notice: It is theWORSTtrouble they have ever experienced. Worse than even World War ii and the concentration camps. This coming nuclear holocaust is the culmination of a long history of mankind’s failed attempts to rule over man.

This time of trouble and world war climaxing in nuclear holocaust has not yet happened. It is a prophecy for the future, as verses 8-9 make undeniably clear.

Retreat, Then and Now

MacMillan wrote, “Britain, which once played an international leadership role during the 19th and the first part of the 20th centuries, in the end found the demands too great and the costs too high. After World War ii the British people were no longer willing and the British economy no longer capable of sustaining such a role” (op. cit.). In 2014, Britain’s brother, the United States of America, finds itself in the exact same position.

“[T]he U.S., while still the strongest power in the world, is not as powerful as it once was,” MacMillan continued. “It has suffered military setbacks in Iraq and Afghanistan, and has had difficulty finding allies who will stand by it, as the current Syrian crisis demonstrates. Uncomfortably aware that they have few reliable friends and many potential enemies, the Americans are now considering a return to a more isolationist policy. Is the U.S. now reaching the end of its tether, as Britain did before it? If it retreats even partially from its global role, which powers will dominate the international order, and what will that mean for the prospects of world peace?”

This scenario is exactly what the Trumpet (and Herbert W. Armstrong before that) has been prophesying for decades. In the 1950s, Mr. Armstrong was warning that the sun had already set on the British Empire—and that the United States was facing a similar stunning and rapid demise.

So what comes next? For MacMillan and others, the future is unsure, but they see a great coming conflict building.

We, however, can tell you exactly what will happen next on the world scene and which nations will play the key roles. Bible prophecy has laid it all out in vivid detail!

Daniel 11:40 details an initial clash “at the time of the end” between a “king of the north” (German-dominated united Europe) and a “king of the south” (Iranian-dominated radical Islam). Then the king of the north will attack America, Britain and the little nation of Judah, and the whole world will be swept up into the most destructive world war mankind has ever seen.

Just as it was with the first two world wars, an instigator will begin dominating Europe while an ignorant, complacent declining superpower will allow it to do so. But unlike with the previous two, neither Britain nor the United States will be strong enough this time around to rally the nations together and salvage peace. The existence of nuclear weapons will make this final great war culminate in such worldwide destruction that Christ Himself will return as the only one who can stop mankind from utterly destroying itself—as He Himself stated in His own words.

That is what’s coming! The unthinkable will happen. But thankfully, that great war will lead us into another event that is just as unthinkable to most people: Jesus Christ returning to Earth to stop it. Then and only then will the cycle of world war finally be broken as He establishes world peace—and our planet will never again be marred by the destruction of worldwide war.