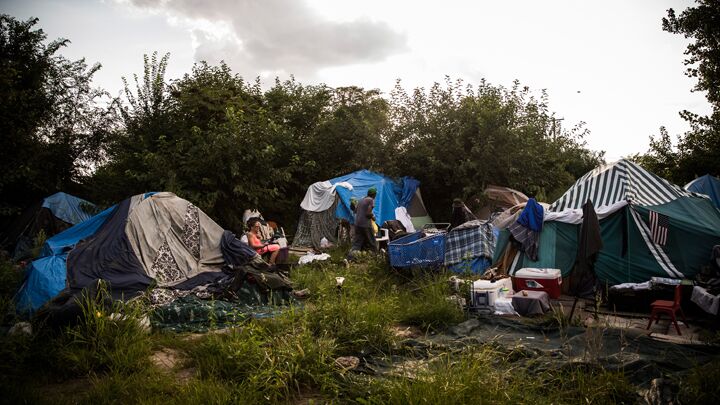 Criminalizing homelessness isn’t the way to solve it.

The state of New Jersey, along with Camden county and city, began evicting squatters from five tent cities in Camden on May 13. Meanwhile, the number of people losing their homes to foreclosures is skyrocketing again, despite popular belief that the housing crisis is over.

Hazmat teams, tractors and forklifts began demolishing and cleaning up the Camden encampments last week. It may be a blessing to nearby communities, but with city shelters at capacity, many of these homeless will be forced to move—probably to set up camp in someone else’s backyard.

In Portland, Oregon, “Dignity Village,” an encampment set up by homeless people, is now 14 years old.

Despite the demolitions in Camden and elsewhere, the National Law Center on Homelessness and Poverty says that following the 2007 economic downturn and supposed recovery, the number of tent cities popping up in the United States is on the rise again.

According to the center, there are at least 100 large encampments across the U.S., some multiple years old like Dignity Village. Some encampments are orderly, with mayor-like officials, curfews and strict regulations on joining the community. Others are trash-strewn, lawless and filled with everything from human waste to drug paraphernalia.

The 2013 Annual Homeless Assessment Report (ahar) to Congress says that as of January 2013, over 600,000 homeless people live in the U.S. That year-old assessment indicates the number of homeless has declined by 9 percent since 2007. In contrast, the National Center for Homeless Education, which is funded by the Department of Education, says there were 1.2 million homeless children in America in 2013.

America has changed a lot over the years.

In 1964, a group of researchers famously roamed New York City and found only one homeless man in all four of its major parks (Making Room: The Economics of Homelessness). There were just a few hundred homeless in the whole city. In Chicago, the numbers were so low that researchers decided it wasn’t worth doing a survey to quantify it. Then something changed. During the 1970s, for the first time homeless women began appearing on the streets in significant numbers. Throughout the 1980s, numbers of unsheltered homeless in New York were skyrocketing. By 1990, one survey estimated that over 10,400 lived on the street (ibid).

Today, it is hard to know how many street dwellers occupy New York’s parks and abandoned buildings. The city’s hope survey says there are only 3,180, but the survey has been criticized for massive underreporting and for using statistical methods that purport to show the number of homeless decreasing even though the number physically counted in the survey is actually increasing. The hope survey also purported that the number of unsheltered homeless continued to drop throughout the Great Recession, which saw millions of Americans lose their jobs and then their homes to foreclosure. What is known is that, today, approximately 53,000 homeless people sleep in city shelters. cnn says homelessness in New York City is at a record high, and the same can be said for much of America. This despite a massive increase in welfare programs since the 1960s.

With so many homeless people, the pressure on governments to do something about it is growing. Minimum wage protests at McDonald’s and Wendy’s show the growing frustration. President Obama pledged to push for an increase in the national minimum wage. Unfortunately, many of the efforts to fix homelessness are doomed to fail because they tend to focus on the symptoms (squatters camps, increased cost of living) rather than fixing the cause of these problems.

In Palo Alto, California, so many people were living in their vehicles that city leaders recently passed a ban—which has a penalty of up to six months in jail.

At least 70 cities have passed ordinances designed to push homeless people from residing within city limits. Some are under court challenge.

Other cities are taking a different approach—handing out free one-way bus tickets to homeless people. This is a good thing if the tickets take these people back to their families who can help them get back on their feet. If it is just shuffling people around the nation, buy stock in bus companies.

The rise of tent cities can be linked to several factors including a lack of education, broken families, drug abuse and mental health issues. There is an undeniable economic connection too. The high cost of housing, the rising cost of living, a poor economy and high unemployment are taking a toll. For example, in California, foreclosure rates are up 27 percent from last year. In March, completed foreclosures were up almost 6 percent from February. The stock of distressed properties is nearly three times the levels of the early 2000s.

As the OC Housing News blog reports, the situation is about to get a lot worse. Banks have let millions of people live in homes even though they were not making any mortgage payments. They did this in an effort to keep the property maintained while the banks worked through their solvency issues. Additionally, millions more “homeowners” only making partial payments in an effort to save their homes, were also allowed to stay. But now, banks are finally starting to clear up their inventory of bad loans. “The day of reckoning, though delayed, has finally arrived” (ibid).

No easy solution exists to fix homelessness. Bulldozing tent cities and criminalizing homelessness won’t fix the problem any more than mandating another increase in the minimum wage will solve poverty. Shipping people to other cities may temporarily hide the problem, but will do little to fix it.

Only by tackling the deep causes of homelessness can it be fixed.

If you are facing financial problems, read The Seven Laws of Success and Solve Your Money Troubles. If you apply the principles in these free booklets, they will change your life.