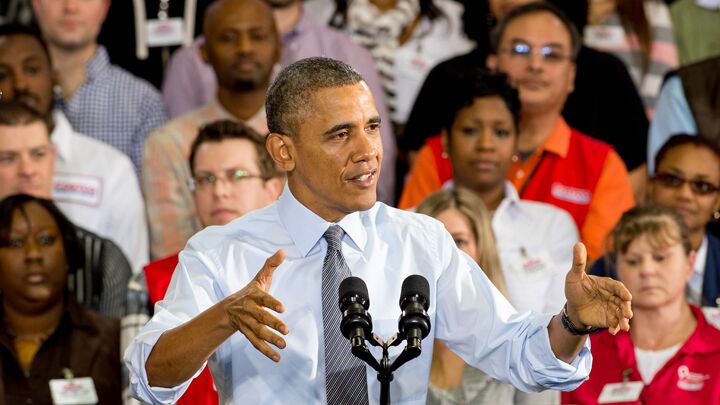 How do we know that raising the minimum wage will end poverty? Because I said so.

“In the coming weeks, I will issue an executive order requiring federal contractors to pay their federally-funded employees a fair wage of at least $10.10 an hour,” President Barack Obama said during his State of the Union speech. “[I]f you cook our troops’ meals or wash their dishes, you shouldn’t have to live in poverty.”

If solving economic problems were only so easy: Issue an executive order; Command businesses to pay employees more; Make companies promise not to fire employees. End poverty by decree.

Realistically, you might as well stand before the ocean and command the waves to cease.

Are there not economic laws? Laws that determine employment levels? Doesn’t supply and demand determine what jobs are worth? Can these laws simply be banished by presidential edict?

And what about poverty? Can it simply be extinguished from the land by outlawing all jobs that pay less than $10.10 per hour?

Doing what he says will “lift millions of Americans out of poverty and help millions more work their way out of poverty,” says the president. Best of all, it won’t require a “single dollar in new taxes or spending.”

See what a great plan this is? There is no downside.

To illustrate the lunacy that passes for economic literacy today, the Huffington Post and the Economic Policy Institute (epi) have come to the aid of the president. Raising the minimum wage from $7.25 to $10.10 per hour would actually cause the economy to “grow by about $22 billion” and result in 85,000 new jobs, they say!

Hahaha. Ocean, I command you to recede!

In case you think $57 per hour is out-of-this-world ridiculous, the Huffington Post actually argues that the minimum wage should really be at least $21.72 per hour based upon advances in productivity. Businesses should be forced to share that bounty and pay workers what they “deserve,” they argue. The epi says the fair minimum wage should only be $18.30 per hour.

So here is a tip for the Huffington Post’s economic writers and the analysts down at the Economic Policy Institute: time for a career change.

If all it takes to eliminate poverty is raising the minimum wage—why haven’t we done this before?

The answer is: We have—and often.

Did that fix poverty in those states? Did it result in lower unemployment? If so, would we be here talking about it again?

Common sense tells you that making it more costly to hire workers results in fewer jobs, not more.

So what does raising the minimum wage actually do? It hurts the very people politicians claim to be helping.

It is possible that small rises in the minimum wage would not cause many job losses, but raising the minimum wage from $7.25 to $10.10 is a massive 39.3 percent increase. It is beyond ridiculous to seriously propose that such whopping increases wouldn’t impede hiring and cause job losses. People who claim otherwise generally point to all the extra spending poor people will do once they get raises, but they conveniently downplay the other consequences.

If companies are mandated to spend more on labor, that increased spending must come from somewhere—that is an economic law that can’t be avoided. Some people say that raising the minimum wage would make people work harder, reduce turnover, and increase productivity. Reality argues otherwise. So, when possible, businesses will pass their increased costs on to consumers. When prices go up, the cost of living goes up—and everyone’s money becomes less valuable. When passing on the cost is not possible, employees will be let go. Or some combination of the above takes place.

Additionally, if businesses have to pay more for workers, they have less incentive to expand.

“How many stores will Walmart, Pizza Hut, McDonald’s, Wendy’s, etc., not open that they would have otherwise if the minimum wage rockets up to $10.10?” economic analyst Mike Shedlock asks. Good question!

Additionally, as the price of labor goes up—the drive toward automation, which is rapidly accelerating, will speed up even further. How many more self-checkout lines and robots will we see? Again, this means fewer jobs for the unskilled poor.

Here is how Nobel Prize-winning economist Milton Friedman famously described minimum wage laws and those that push them (emphasis added):

The fact is, the programs labeled as being “for the poor,” or “for the needy,” almost always have effects exactly the opposite of those which their well-intentioned sponsors intend them to have.[T]ake the minimum wage law. … The do-gooders believe that by passing a law saying that nobody shall get less than … whatever the minimum wage is, you are helping poor people who need the money. You are doing nothing of the kind. What you are doing is to assure that people whose skills are not sufficient to justify that kind of a wage will be unemployed. …The minimum wage law is most properly described as a law saying that employers must discriminate against people who have low skills. … Thus, the consequences of minimum wage laws have been almost wholly bad. We have increased unemployment and increased poverty.There is absolutely no positive objective achieved by the minimum wage law.Its real purpose is to reduce competition for the trade unions and make it easier for them to maintain the higher wages of their privileged members.

America has known for decades that minimum wage laws actually do the opposite of what politicians claim. Yet we keep pushing them. Isn’t that the definition of arrogance? Doing the same thing over and over again yet expecting a different result just because this time you said so?

And remember, the proposed minimum wage hike comes on top of the Obamacare penalties that are also raising the cost of employing people.

There will be additional consequences for poor people too.

For example, there will also be fewer full-time jobs. Businesses will logically seek to keep healthcare costs to a minimum and avoid the penalties of Obamacare by employing more part-time and fewer full-time workers.

That is why President Obama recently issued another executive order mandating all businesses certify under penalty of perjury that they are not firing workers due to Obamacare.

By presidential order I command that businesses are no longer allowed to fire people.

Now businesses are not allowed to make staffing decisions based on tax-implications or their healthcare costs? How is this ridiculous law even enforceable?

It’s as if America’s rulers think they can void the consequences of their diktats by simply issuing more diktats.

The truth is, poverty cannot be made to disappear simply by ordering it to disappear. Jobs cannot be created by mandating businesses to employ more people. Economic laws and the consequences for breaking them cannot be avoided.

Caligula issued a lot of ridiculous orders that could not be carried out. He wasted a lot of time and effort fighting a fake war. He also spent a lot of resources trying to convince people he was a god.

But none of that changed reality. He was not God. His orders could not negate natural laws. And, in the end, all his ridiculous antics led to his downfall. It wasn’t long before Caligula was replaced by Claudius.

Raising the minimum wage will not end poverty any more than stabbing at the ocean and commanding the tide to recede will make you a god.