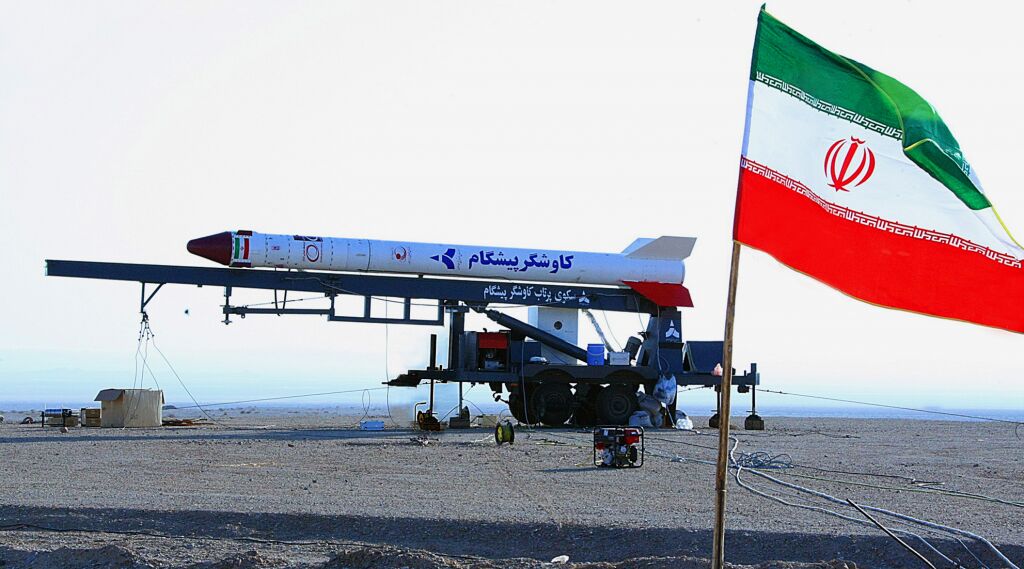 The Iranians are playing for time; for Europe, the result could be momentous.

If Iran drags its feet in ongoing nuclear talks, the EU is OK with that. Such was the essence of EU Foreign Policy Chief Catherine Ashton’s recent statements at the outset of current negotiations over a nuclear deal.

According to the deal, in exchange for lifting sanctions on Iran—which Europe and the United States have already done—Iran is required by July 20 to agree on long-term limitations to its nuclear work. But Ashton said the EU “will take the time that is necessary to get this to be the right agreement.” In other words, Europe is prepared for Iran to drag the negotiations past the deadline.

Those familiar with recent Iranian history know it needs no encouragement to drag out things. In fact, if there is one behavior that has characterized the Islamic Republic’s negotiating strategy with the West, it has been foot-dragging, stalling and playing for time.

Astute observers recognize Iran’s use of the current nuclear talks as a stall tactic, yet the EU seems to be going out of its way to give Iranian foot-dragging the green light. Does this simply mean Europe is naive?

Maybe so. Under the current leadership, it could be that the Europeans don’t understand Iran’s goal of regional hegemony and how the Mullahs are working toward it.

Allotting Iran carte blanche on time appears naive because Iran uses each day of the negotiation period to advance its missile technology—the preferred means of delivering a nuclear payload. Iran is also poised to launch three new satellites into space in the coming weeks. Since the technology for this launch is nearly identical to that used for missile launches, experts say Iran’s space program is a cover for its ballistic missile work.

Six months (or however long the negotiations drag on) may provide Iran with ample time to bring its weapons delivery technology up to speed with its nuclear technology.

Europe’s nod to Iran also coincides with a bombshell report by the U.S. Department of Defense, which admitted that Western intelligence may be unable to detect an Iranian sprint toward nuclear weapons. “Iran could surprise the world with a nuclear test at least as easily as India did in 1998, when the intelligence community gave… zero warning that New Delhi was about to set off a bomb,” the report said.

The result may prove instrumental in deploying a German-led European army on the world stage.
It is also significant that the easing of economic sanctions that formed the basis of this interim negotiation period has already pumped new lifeblood into the Iranian economy. Business delegations and billions of dollars in oil payments have been flooding into the Islamic Republic, and great quantities of it fund the nuclear program. Improved economic conditions also help to quell domestic unrest and ease internal pressure on the Iranian regime to reach a comprehensive deal with the West. The longer the interim accord drags on, the more economic relief Iran enjoys.

It is possible that Europe’s soft stance is fueled by naivete, but it could also be a calculated tactic. Either way, the result may prove instrumental in deploying a German-led European army on the world stage.

To get a clearer idea of Europe’s position in these talks, let’s project forward to this time next year, and consider a very likely scenario:

Suppose that for most of 2014, the six powers negotiating the nuclear deal with Iran have offered concession after concession in hopes of convincing Iran not to develop nuclear weapons. During this time, Iran has continuously given lip service to its “shared hope” for a diplomatic agreement.

Sanctions have remained scaled back, and for fear of derailing talks, enforcement of remaining sanctions has been scant. Money has continued to flow into the Iranian economy.

In the meantime, using its space program as a cover for ballistic missile work, Iran has made great strides toward perfecting its nuclear weapons delivery system.

To keep hope alive among Western powers, Iran upholds its agreement not to enrich uranium past 5 percent, but it does not decommission a single one of its 18,000 centrifuges. Instead, each of them has been running at full capacity, increasing Iran’s stockpile of low-enriched uranium.

Europe, in agreement with the other Western powers, has continued to grant generous extensions to the negotiation deadline, and yet—as expected by all sane observers—a comprehensive deal has not materialized.

Finally, Iran invents some grievance as a pretext for withdrawing from negotiations, and kicks UN inspectors out of the country. Iran then returns to enriching uranium using those centrifuges that never stopped spinning. That means it needs only six weeks to return to its previous stock, and another six to enrich to weapons grade.

Accustomed to Iranian antics, most of the world yawns.

Russia and China refuse to criticize Iran. Western leaders reassure their audiences that Iran’s withdrawal is only temporary, designed to placate Iran’s hardline domestic audience, or perhaps to push Tehran’s hardball strategy to extract more economic and security concessions. As soon as Iran’s latest episode of hostile posturing subsides, there is much hope for an accord, Western voices declare.

Then everything suddenly changes.

Iran conducts a successful nuclear weapons test, and announces that it has successfully integrated this weapon with its ballistic missile technology. The world’s tiny nuclear club suddenly has another very volatile member.

This scenario is by no means implausible, and many commentators already acknowledge its likelihood. “Six months will turn into eight months or 12 months,” the Jerusalem Post recently wrote, “and the Iranians will continue to play for time.” The result of this foot dragging, Caroline Glick said, “will be Iran with a nuclear bomb or nuclear arsenal in its basement, waiting for a propitious moment to conduct a nuclear weapons test or attack.”

When that “propitious moment” arrives, Iran may feel invincible. However, will Iran actually have set itself up for a stunning turning of the tables?

How This Scenario Would Position Europe

Stop for a moment and consider the position in which Europe would find itself if such a scenario played out.

While militarily powerful in a collective sense, the EU appears to be only a collection of bickering lightweights, with no apparent leadership.
Out of the blue, the security situation in the Middle East and Europe has been turned upside down. Global oil prices surge. With southern Europe in range of Iran’s nuclear armed ballistic missiles, the EU stares into the face of a grim new threat. Europe also finds its energy security in tatters, with supplies flowing through the Persian Gulf subject to the whims of an increasingly confident Iran, and supplies from the east in the grip of Russia.

Europe’s Middle Eastern allies would be terrified but helpless to act. These regional stakeholders—Israel, Turkey, Saudi Arabia and the Gulf states—would know that while Iran may only have one or two viable weapons at that stage, its arsenal would rapidly grow. Israel and Saudi Arabia—Iran’s avowed enemies and primary targets of its arsenal—are determined to neutralize the Iranian nuclear threat, but they simply lack the military might for the kind of invasion, including boots on the ground, that would be requisite to accomplish such a feat. That means they would wholly support a full-scale military strike against Iran by any third party with the power to see the task through. But it’s painfully obvious that the fatigued U.S. is the last place to look for such intervention.

What about Europe itself? While militarily powerful in a collective sense, the EU appears to be only a collection of bickering lightweights, with no apparent leadership.

This would be the terrifying status quo that everyone would have to accept. But would Germany and the EU really accept that outcome?

A German-led European military alliance would find itself positioned as the only power on Earth possessing all three requirements needed to reverse the Iranian threat: capability, incentive and will.
In such a scenario, through months of negotiations, the Europeans would have shown the world that they were willing to bend over backward to try to avoid military action. They would have offered every compromise, giving Iran the benefit of the doubt at every twist and turn.

All of this, only to find themselves betrayed and played for fools—and to find their southern terrain and allies in the Middle East within range of a tiny, yet nuclear-armed, arsenal of ballistic missiles. Europe would find itself walking a global stage upon which America no longer plays the role of security guarantor. And on that world stage, the only other military powers capable of countering the Iranian nuclear threat—Russia and China—enjoy seeing the West bogged down in conflict with Iran.

With the U.S. dead-set against using military means to counter the Iranian nuclear threat, Europe would find itself practically forced to act on its own.

In short, in this highly probable geopolitical scenario, a German-led European military alliance would find itself positioned as the only power on Earth possessing all three requirements needed to reverse the Iranian threat: capability, incentive and will.

Whether wittingly or not, Europe may be setting itself up for a spectacular betrayal by Iran. When that happens, with America out of the picture and with a fanatical regime aiming nukes at the Continent, Europe would suddenly feel an urgent need to take military action.

Along with that need, though, it is significant that this betrayal would come at a time when Europe has another powerful motive for moving against Iran. Perhaps even more seismic than the political fault line between Europe and Iran is the one dividing Europe and Russia.

Moscow’s recent threats to withhold gas supplies from Ukraine have spawned deep soul-searching in Europe about the Continent’s dependence on Russian energy. Europe longs to deny Russia that powerful point of leverage, but doesn’t have a good option to do so. If Europe occupied an oil-producing giant like Iran (and controlled the Persian Gulf through which its crude flows) that would instantly deny Russia one of its most effective tools of manipulation.

For two decades, Trumpet editor in chief Gerald Flurry has warned that Iran’s foreign policy would become so pushy that it would provoke a devastating attack from its Western enemies. And that it would not be America that will intervene to neutralize the Iranian threat, but a German-led Europe.

Here’s one example of this forecast, which he wrote in 1996: “The stage is being set for an Islamic group of nations to be led by Iran …, which will push at … the European Union. … [Iran] probably thinks Germany will react like the U.S.—which is indecisive at best. If it thinks that, it is in for a bitter jolt! … The Germans move lightning fast in warfare …” (The King of the South).

In the years since that was written, the geopolitical pieces have fallen into place in a way that could rapidly lead to exactly such an outcome. When it does, it would be the first domino to fall in a far greater global conflagration.

To understand more about the quickly-approaching fulfillment of the Trumpet’s warnings on these developments, read Mr. Flurry’s article, “Nuclear Iran Means Nuclear War.”