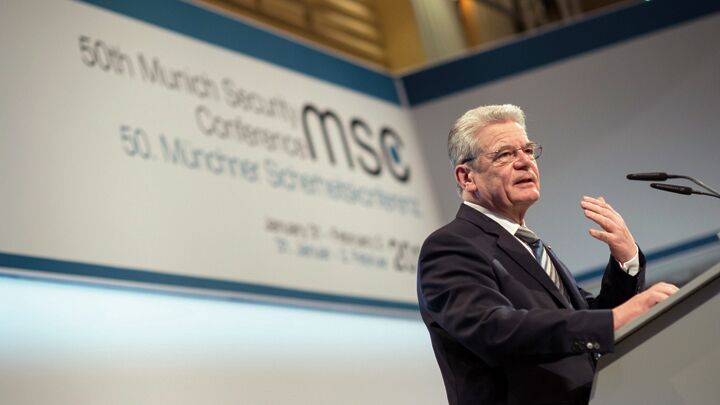 The declaration of Germany’s revamped foreign policy reached new heights at the 50th annual Munich Security Conference, which occurred the first weekend in February. This important conference brings together the world’s most distinguished leaders, thinkers and politicians to discuss the most pressing challenges facing the international community. This year’s participants explored, among other topics, the crises in Syria and Ukraine, the U.S.-Europe relationship, and the future of European defense. Amid all the discussion, however, one theme threaded its way through the entire three-day conference.

This theme was established by Joachim Gauck, Germany’s president, in a welcome address that centered on “Germany’s role in the world.” Gauck’s speech, though contrite and altruistic in language and tone, made a compelling case for a stronger, more assertive Germany. The essence of his message was, the world needs us; we’d be selfish not to help. More than anything, Gauck’s message was a sincere plea to 80 million Germans to shed their pacifism and get behind the German government as it unselfishly serves mankind.

“We Germans are advancing towards a form of responsibility that has not yet become routine for us,” he stated. We live in a “world in which economic and political power is shifting and entire regions are arming themselves. In the Middle East, there is a danger that individual crises will converge and engulf the whole region. At this very moment, the world’s only superpower [America] is reconsidering the scale and form of its global engagement ….” Germany must respond: “I don’t believe that Germany can simply carry on as before in the face of these developments,” Gauck said.

According to Gauck, Germany’s ascension is inevitable. “Germany has already been traveling along the road towards becoming a guarantor of the international order and security for 24 years now,” he said (emphasis added throughout).

President Gauck also questioned Berlin’s presence in key global theaters—the implication being that Germany simply isn’t doing enough. “Are we doing what we can to stabilize our neighborhood, both in the East and in Africa? Are we doing what we have to in order to counter the threat of terrorism? And, in cases where we have found convincing reasons to join our allies in taking even military action, are we willing to bear our fair share of the risks? … What role do we want to play in the crises afflicting distant parts of the globe?”

Gauck’s answer? “In my opinion, Germany should make a more substantial contribution, and it should make it earlier and more decisively if it is to be a good partner.”

The president also boldly addressed the major cause of Germany’s reluctance for greater military and political assertion: the shame and guilt some Germans still have for World War ii. “I have to admit that while there are genuine pacifists in Germany, there are also people who use Germany’s guilt for its past as a shield for laziness or a desire to disengage from the world.” In other words, Germany must shed the guilt and stop hiding behind World War ii!

He drove this point home further in his conclusion, once again addressing the German people specifically: “I would like to request that … we too place our trust in this fundamentally reformed country of ours. The post-war generations had reasons to be distrustful—of the German state and of German society. But the time for such categorical distrust is past.” Gauck believes Germany has fully repented and atoned for the Second World War, and that it’s time the German public stopped dwelling on the past. We must “have confidence in our abilities and should trust in ourselves,” he stated.

Many considered Gauck’s speech a landmark. Gunther Nonnenmacher, co-publisher of Frankfurter Allgemeine Zeitung, wrote that Gauck “may well have spoken the authoritative word in the debate over German foreign and security policy.”

Gauck was not the only German leader endorsing a foreign-policy transformation. Defense Minister Ursula von der Leyen took the stage next and continued where he left off. She stressed the need for greater integration among European nations in security and military. She also recalled some of the many global crises, in Syria, Libya and Africa, before stating: “To sit and wait is not an option. If we have means, if we have capabilities, we have the obligation and we have the responsibility to engage.”

Frank-Walter Steinmeier, Germany’s foreign minister, also spoke, and he too stressed the urgent need for a more assertive foreign policy. “Germany is too big to merely comment on world affairs from the sidelines,” he stated. He outlined seven practical propositions for Germany. One stated, “Germany must be ready for earlier, more decisive and more substantive engagement in the foreign and security policy sphere.” Another included the promise that Germany must provide “concrete” assistance to global issues, and not just “rhetorical outrage.” In another, he stated that Germany was “keen” to give input and leadership in negotiations for a common “European foreign, security and defense policy.” In another, Steinmeier criticized Germany’s “culture of restraint” and suggested Berlin needed to show itself more prepared and willing to act militarily when called upon.

These are dramatic statements, and they’re coming from Germany’s highest leaders. They ought to have received far more serious attention!