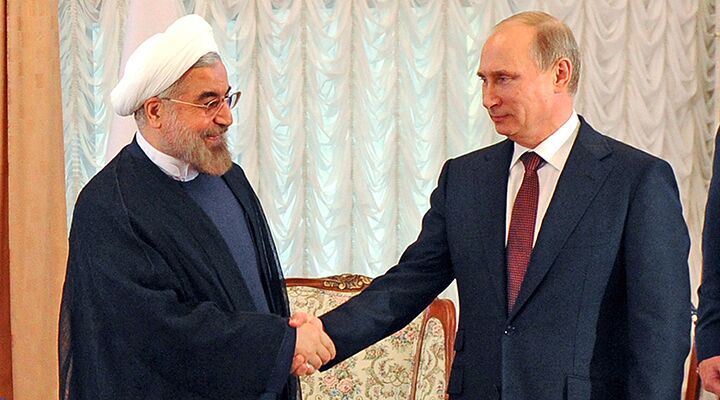 Moscow’s relationship with Tehran gives it critical leverage over America and Europe.

The Trumpet recently highlighted the prophetic significance of the support China, India and even Japan are giving Russia as it confronts Europe and America over Ukraine. But Moscow is solidifying friendships beyond Asia, and one in particular bears close attention. This is Russia’s relationship with Iran.

First, recall how much diplomatic energy Europe and America have invested in recent months in improving relations with Tehran in the hope of securing a permanent peace agreement. America’s president has worked especially hard to placate Tehran. As his presidency winds down, and with his domestic policies flailing, Barack Obama wants to go down in history as the man who negotiated peace between the U.S. and its most implacable enemy. Although it’s a pipe dream, securing a deal with Iran is one of the Obama administration’s chief foreign policy ambitions.

Today, after months and years of compromise and capitulation, America and Europe (the P5+1) are on the cusp (at least this is what Tehran has led them to believe) of securing what they believe to be a historic deal with Iran. After a preliminary deal struck last November in Geneva, the P5+1 anticipates a fully fledged deal over the next few months.

That is, unless Vladimir Putin strikes first.

Russia’s relationship with Iran is complex. The Kremlin isn’t thrilled about the idea of a nuclear Islamist state to its south, or Iran’s sponsorship of Islamist terrorists in Russia’s periphery, particularly in the Caucasus. On the other hand, befriending America’s enemy provides certain benefits, chief of which is significant leverage over Washington. And as Western efforts to punish Putin for his behavior in Ukraine mount, the Kremlin is seeking leverage by revitalizing its friendship with Iran.

In February, Iran’s ambassador to Russia announced that the two nations were working on an oil-for-goods deal. Under the deal, Iran will send 500,000 barrels of oil a day to Russia in return for Russian goods and even Russian help building nuclear power plants. On March 12, Iran’s official news agencies reported that Russia had agreed to build two new 1,000 megawatt nuclear power stations. These will be in addition to the Bushehr facility, which Russia also built.

The reports made no mention of how much oil Iran would be sending to Russia in exchange. But as of October last year, Iran was exporting under 800,000 barrels of crude oil per day—down from nearly 2.5 million in 2011. Selling another roughly 500,000 barrels to Russia would be a big deal—almost doubling its oil exports. For Tehran, the addition of a couple of extra nuclear power plants is always a good thing too. Russia’s support of Iran dilutes Western efforts to marginalize Tehran, and reduces the incentive on Iran to negotiate with the West.

The deal with Iran hasn’t been finalized, so there’s plenty of time for Russia to back down if the West concedes in Ukraine. But Moscow’s timely dalliance with Iran is a clear warning to America and Europe—a reminder that the Kremlin has the power to tank Western negotiations with Iran.

America has gotten the message too. “We all hope that the incredibly difficult situation in Ukraine will not create issues for this [Iranian] negotiation,” a U.S. official told Reuters on March 14. “We hope that whatever happens in the days ahead, whatever actions that we in the international community take depending upon the decisions and the choices that Russia makes, that any actions that Russia subsequently takes will not put the negotiations at risk,” he said.

Gary Samore, a former White House coordinator for arms control, recently warned that just the disunity between Russia and the rest of the negotiating team could “lead to at least the appearance, if not the reality, of disarray within the P5+1.” Iran could find this disconcerting, and make it feel “more able to walk away from the nuclear negotiations,” he said.

This isn’t to say that Western negotiations with Iran depend on support from Russia. The Kremlin has never been a genuine supporter of negotiations with Tehran. However, America and Europe do require the Kremlin to be aloof from the negotiations and willing to leave Iran alone to negotiate. An active Russia-Iran axis, with the Kremlin actively supporting Tehran—and gaining influence in the process—would complicate peace negotiations enormously. Russia and Iran are formidable foes individually, but a serious alignment between the two would be a nightmare.

Buying oil for Iran is only the start of what Russia could do. For example, back in 2010, Russia agreed to sell Iran an S300 air defense system. Moscow pocketed Iran’s cash, but never delivered the goods. It could change that now. Giving Iran one of the world’s best surface-to-air missiles would make any attack on Iran much more difficult.

It’s possible Russia’s relationship with Iran may be part of the reason Washington hasn’t responded more aggressively to Putin’s belligerence in Ukraine. Is the Obama administration more concerned about peace with Iran than with America’s treaties with Ukraine or confronting Russia?

The actor to watch in all this is Europe. Europe doesn’t have the breathing room that America has with Iran and Russia. The Continent isn’t separated from either power by massive oceans. Europe has significant financial and energy assets at stake in both Iran and Russia. Europe is within range of Iran’s ballistic missiles, and Islamist terrorists are embedded throughout the Continent. For Europe, the behavior of the regimes in Moscow and Tehran are of supreme importance—and the idea of them working together against Europe is deeply disconcerting!

Russia’s invasion of Ukraine shows that the Kremlin does not respect the sovereign borders in Eastern Europe. Europeans are well aware of their history with Russia, and what can happen when either side doesn’t respect its borders with one another. For Germany and Europe, responding to Russia, at the very least showing itself capable of displaying equal power and force, isn’t a luxury. It is a necessity, and one it will have to fulfill soon.

From the outset of the crisis in Ukraine the Trumpet has warned that Europe is the place to watch. The dramatic developments in Ukraine are forcing the Continent to address its many issues and figure out a way to coalesce into a force capable of confronting Russia, Iran and other crises coming its way. Separately, Iran and Russia already deeply concern Europe. You can be sure the development of a more significant axis between these two will intensify Europe’s anxieties and increase the pressure on Europe’s leaders to create the Catholic-inspired, German-led united European superpower that we have long forecast.