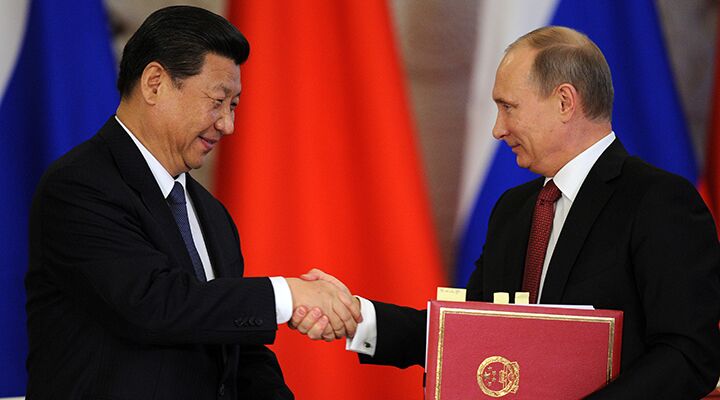 Having the approval of the international community is about as important to Vladimir Putin as ensuring freedom in the Russian presses. Nevertheless, the Russian president prefers not to have to stand alone facing the West’s criticism over his invasion and occupation of Crimea, Ukraine.

And now, thanks to the support of some of the most populous and powerful countries on the planet, Mr. Putin can stand up to the West with over a third of the world’s population at his back.

A Bow From Beijing

“Backing Russia is in China’s interests,” said the Global Times, a mouthpiece for China’s Communist Party, on March 5. “Russia’s resistance against the West has global significance. Supporting Russia consolidates China’s major strategy. … We shouldn’t disappoint Russia when it finds itself in a time of need.”

The Chinese government’s official Xinhua news agency also placed the blame of the Ukraine crisis squarely on the West, and said Putin’s actions were justified.

So far, Beijing has restrained itself from intensive cheerleading for Putin, and has instead presented its support for him somewhat softly. That’s because, although the Chinese celebrate Putin’s willingness to defy the West, they don’t want to damage economic relations with their largest trade partner—the European Union. The Chinese have managed to walk a somewhat fine line on the issue, but there is no mistaking the fact that the anti-Western ideology China shares with Russia trumps Beijing’s short-term economic interests.

The Chinese leaders harbor expansionist ambitions of their own, which are growing bolder by the month. By siding with Putin, China can expect Russia to back Beijing as it pushes to “do a Ukraine” of its own in the South China Sea and elsewhere.

China could suffer some short-term economic setbacks by refusing to side with the West, but the Chinese esteem it a small price to pay in exchange for diminishing U.S. power and simultaneously making the invasion of a sovereign nation less of a 21st-century taboo.

A Nod From India

The day after China cleared the path with that Global Times piece, its neighbor to the south followed down it. “There are legitimate Russian and other interests involved [in Ukraine]” a senior Indian official said. “We hope … there is a satisfactory resolution to them.”

The statement represented a sharp break between India and the West, which took many analysts off guard.

But Moscow and Delhi have been comrades for decades, especially since 1974 when India conducted nuclear tests and the Soviet Union emerged as the only major nation to support its right of “self-defense.”

India is now returning the favor by supporting Russia. India also feels the increasing threat of China’s expanding power since many of Beijing’s recent incursions have been into Indian territory. India also sees, with greater clarity every week, that the U.S. cannot be counted on to counter China’s rise. So, Indian leaders are taking steps to ensure that they have friends in the neighborhood. Their decision to back Russia’s invasion of Ukraine was motivated by that goal.

India also has interests in some of its autonomous neighbor states, and has interfered in some instances (during the Sri Lanka Civil War, for example) to defend societal factions that have close links with India. Like China, India might calculate that it benefits from the establishment of an international precedent that sees a major power intervening in a neighboring nation.

Japan has sided with the West in condemning Putin’s conquest of Crimea. Yet Tokyo has refused to join Western powers in imposing economic sanctions on Russia, and even decided to proceed with high-level Japan-Russia military talks underway this week.

Why the two-faced behavior? Because, in between Russia and the United States, Tokyo feels caught between a rock and a hard—or actually a soft—place.

Cognizant of how soft and militarily anemic the U.S. has become, Japanese Prime Minister Shinzo Abe has spearheaded a historic turn toward Russia. Thawing the decades-old iciness between Tokyo and Moscow is among the highest priorities of his foreign policy, and he has already made strides toward that end.

Since coming to power in 2012, Abe has held five meetings with Mr. Putin—more than he’s had with any other head of state.

Last month, while leaders of the U.S., UK, France and Germany were notably absent, Abe attended the opening ceremony of the Winter Olympics in Sochi, Russia. “I have been saying for a long time that Japan and Russia have the bilateral relations with the greatest latent potential anywhere,” the Japanese leader said after the ceremony.

So, here is the explanation for Japan’s two-faced behavior. Japan sided with the West rhetorically because Tokyo is still officially dependent on America for security, and because Japan doesn’t want to let Putin set a precedent that could allow China to invade islands claimed by both Tokyo and Beijing without Western retribution. But Japan refused to take action against Putin—such as economic sanctions or canceling the military talks—because Tokyo sees that the American security blanket Tokyo has been reliant on is now like a moth-eaten coat. Prime Minister Abe apparently wants to knit a Japan-Russia alliance before someone applies a little pressure on that U.S. blanket and fully exposes its tattered condition to the world.

When the Ukraine crisis first erupted, some top-notch analysts, such as Ambrose Evans-Pritchard, were convinced that China would side with the West. A revived Russian empire, such analysts said, would pose too great a danger to Beijing for the Chinese not to rally against it.

But this perspective fails to recognize that to China, the West is a far greater enemy. Decades ago, Chinese Marxist revolutionary Mao Tse Tung promised his people, “All that the West has, China will have.” China’s decision to support a revived Russian empire despite the danger such an empire poses to Beijing is evidence that Mao’s words still resonate clearly in the Chinese mindset.

Russia, India and Japan are driven, to varying degrees, by the same overriding worldview that drives China: Ultimately, despite any near-term risks we may have to endure, despite any economic injuries we may have to sustain, the world order that the West created must be overthrown. The system that says invading a sovereign nation is taboo must be toppled.

We can leave the question mark over Japan for now, but China and India have made their pro-Putin stances quite clear. This means that rallied behind Vladimir Putin and Russia’s 144 million people, potentially stand China’s 1.36 billion and India’s 1.24 billion. Backing Moscow’s second-most powerful military in the world—potentially stand China and India with the third- and fourth-most powerful military forces. Alongside Russia’s 8,400 nuclear weapons, may be China’s 240 and India’s 100.

Of course, the statements from China and India in support of Putin’s invasion don’t equate to solidified military unity between the three powers, but they do provide strong indication of where Beijing and Delhi would throw their weight in the event of escalation.

It all adds up to mean Russia has won its Ukraine gamble.

Before the statements from China and India, U.S. President Obama said Putin’s invasion of Ukraine violates “basic principles that are recognized around the world.” He said the world was “largely united” in believing Putin had violated Ukraine’s territory. He said it shows that “Russia is on the wrong side of history.”

But it’s now clear that the world is anything but united on the issue, and that it is Mr. Obama who is on the wrong side of reality.

The Trumpet has never made the mistake that Mr. Evans-Pritchard, President Obama and others routinely make regarding the goals of the Eastern powerhouses. In fact, we have specifically forecast, for over 50 years, that Asian nations would band together against the West. This is because the Trumpet’s analysis is built upon a source of intelligence altogether different from those most analysts use.

To learn more about this intelligence source and the direction Russia and other Asian powers are marching in, read “The Kings of the East,” and come back to theTrumpet.com this Saturday to watch editor in chief Gerald Flurry’s video “Russia and China Unite (Crimea).”