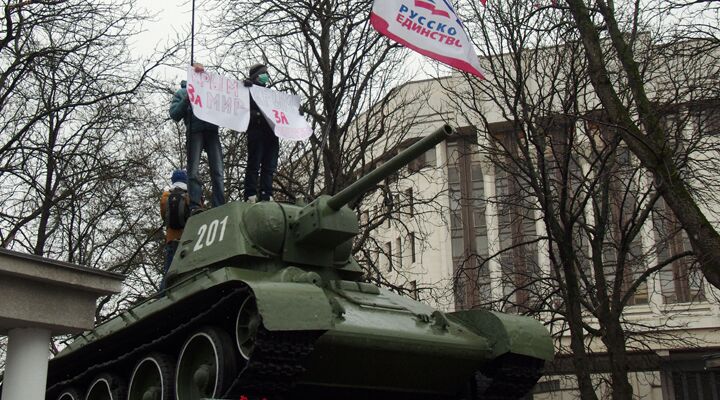 Is Russia preparing to invade?

The drills, Russia says, have nothing to do with events in Ukraine, they’re merely designed to test the combat readiness of the military. But as it makes this display of power, Russia is repeating exactly the same motions it went through before invading Georgia in 2008, where it launched very similar military exercises right before the war began.

There are more parallels. Ahead of the Georgia War, Russia offered citizenship to the inhabitants of Georgia’s breakaway regions of Abkhazia and South Ossetia. It has said it will make the same offer to those living in Crimea—an autonomous republic within Ukraine.

In fact, Crimea could give Russia the perfect pretext to invade. The republic was part of Russia proper until Nikita Khrushchev gave it to the Ukraine ssr in 1954. Fifty-eight percent of the population is ethnically Russian. According to Ukrainian think tank Razumkov Centre, 63.8 percent of Crimeans would like to secede from Ukraine and become part of Russia.

To take Crimea, Russia wouldn’t even have to launch an invasion. Sevastopol, the peninsula’s main port, houses the Russian Black Sea Fleet. Around 13,000 Russian soldiers are usually stationed there. Journalists on the ground already report that Russian soldiers are taking positions beyond their base.

Meanwhile, armed protesters have taken over Crimea’s parliament. “They have enough arms to defend [themselves] for one month,” former Crimean Prime Minister Serhiy Kunitsin said.

Ukraine’s response has been bold, bordering on crazy. “Any [Russian] military movements, the more so if they are with weapons, beyond the boundaries of this territory [Russia’s base] will be seen by us as military aggression,” acting Ukrainian President Olexander Turchinov told Russia.

In response to the occupation of Crimea’s parliament, he announced, “I have given orders to the military to use all methods necessary to protect the citizens, punish the criminals, and to free the buildings.”

This could get really dangerous. After all, Turchinov represents a government that came to power because armed protesters, with popular support, forcibly took control of government buildings. How are the protesters in Crimea’s parliament any different? If Ukraine’s new government starts forcibly removing Crimean protesters from government buildings, Putin could invade, using the West’s reasoning against them.

nato is trying to act tough, but America’s credibility has been weakened to the point that it is having little effect. The alliance’s defense ministers signed a statement on February 26, saying that “nato allies will continue to support Ukrainian sovereignty and independence, territorial integrity, democratic development, and the principle of inviolability of frontiers, as key factors of stability and security in Central and Eastern Europe and on the Continent as a whole.”

A decade or two ago, that would have been a promise that America would go to war if Russia invades. But no one seriously expects America to do that now. After the Georgia War and then Syria’s “Red Lines,” no one believes it when America draws a line in the sand. Instead of stopping Russia in its tracks, the statement has been ignored.

But Putin does have one pretty compelling reason to stay out of Ukraine: He doesn’t need to invade. Russia controls most of Ukraine’s trade. Russia is the only nation prepared to lend Ukraine large amounts of money without demanding painful sacrifices. A large amount of the country—perhaps even a majority—support politicians who take a more pro-Russian stance.

The main objective of the Euromaidan protests wasn’t to draw closer to the West, it was to get rid of a corrupt political class. If Ukraine’s pro-Russia Party of Regions can blame all of the corruption on deposed president Viktor Yanukovych, it could still do well in elections.

Meanwhile, the pro-West camp has no clear leader. Splits have caused it real problems in the past. And some leaders, like Yulia Tymoshenko, have proven they have no problem doing business with Russia.

The 2004 Orange Revolution teaches an important lesson. Those protesters brought pro-West Viktor Yushchenko into power. The American and European journalists went home. The West considered that was the end of it, mission accomplished, Ukraine was now part of the West. But once it gained power, the pro-West camp fractured and Russia continued working behind the scenes. By 2010, Russia’s man, Viktor Yanukovych, was back in office.

Russia could choose to play it exactly the same way this time.

In a way, the future of Ukraine is simple. Russia desperately needs Ukraine. Europe doesn’t want to take responsibility for yet another nation in financial trouble. Russia holds all the cards, and has an overwhelming military force on Ukraine’s border. Europe has very few ways to influence events. All this points to a clear Russian victory.

There are two big unknowns: the protesters and Putin. How hard will the protesters push? Will they provoke a confrontation with Russia by going after Crimea? And will Putin want to make an example of Ukraine, moving in the military to ensure he doesn’t lose face in all the other countries he wants under Russian control?

The stakes are high. Regardless of whether Russia actually invades or not, Europe has to be pretty shaken. Just the fact that Putin can launch exercises involving hundreds of thousands of men in a matter of hours is impressive.

For European nations, a Russian invasion in modern Europe is all but unthinkable. The fact that it is a serious possibility, even if it doesn’t happen, will have shaken some key leaders. The break-up of Yugoslavia was bad enough. But that began only shortly after the iron curtain came down. And it was one-sided in Europe’s favor. This time, the side Europe supports could actually lose.

The people on the street weren’t solely factory workers, farmers or coal miners. There were computer programers, marketing professionals and college students. In other words, Ukraine is a modern nation, not all that different from the other European countries to its west.

That a war could happen somewhere like that, right on the borders of the EU, is a wake-up call to Europe. Even if the Russian tanks poised on Ukraine’s borders don’t roll, we will see some changes.

We saw the start of those changes even before Ukraine really exploded. Russia’s belligerence played a major role in Germany officially ending its decades of pacifism and announcing a more aggressive foreign policy. How much more will Germany and Europe change as a result of Russia’s latest threat?

For more on the transformation that the Ukraine crisis is causing in Germany and Europe, read Trumpet editor in chief Gerald Flurry’s latest article, “Germany’s Urgent and Dangerous Military Decision.”