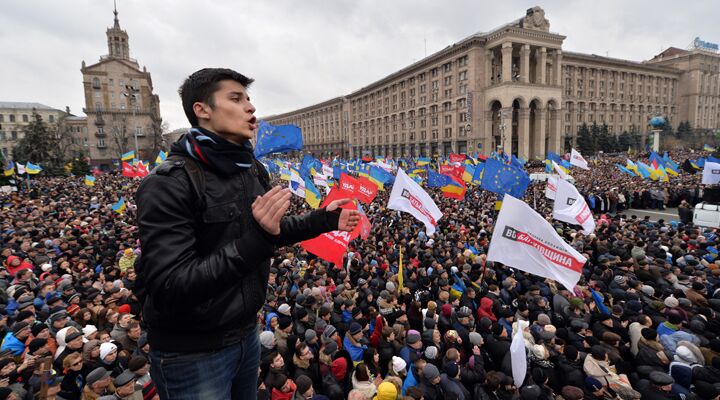 Russia is bullying Ukraine into submission, setting the stage for a more assertive Moscow.

In his version of history, Russia traces its origins back to Kievan Rus—the first Slavic state that centered on Kiev, Ukraine’s capital. The Kievan Rus ruled Moscow and much of the area that is now Russia’s heartland.

Today, many Ukrainians reject the idea that they and the Russians are one people. They find Putin’s description of Ukraine as “little Russia” offensive. Much of Ukraine’s youth would love to be rid of their self-proclaimed big brother, but they’re weighed down with one major curse: Russia still needs Ukraine.

If Ukraine were to ally itself with an enemy nation, Russia can forget about being a world power. Ukraine is a dagger pointed at the Russian heartlands. There are no natural, defensible barriers to stop an invader from Ukraine.

Add to that the fact that Ukraine wasn’t merely a member of the Warsaw Pact during the Cold War—it was part of the ussr itself. Russia’s modern defense architecture was built to include Ukraine as part of the homeland.

Some of that has been dismantled during Ukraine’s 20 years of independence. Ukraine inherited the world’s third-largest stockpile of nuclear weapons from the ussr, for example. These have now been destroyed or sent back to Russia.

But much still remains. Russia’s Black Sea Fleet is stationed in Sevastopol, in Ukraine—its largest military base outside of Russia.

In addition, the deeply connected business and financial interests means that if Ukraine were to open up to the West and adopt its standards of transparency, a lot of powerful Russians (and Ukrainians) could lose a lot of money.

So when Ukraine appeared ready to sign an association and free trade agreement with the European Union, much was at stake.

But all this interconnectivity gives Russia a lot of ways to prevent Ukraine from escaping its grip. President Putin quickly deployed the proverbial carrot and stick.

Nearly a quarter of Ukraine’s exports go to Russia. Over 60 percent go to former Soviet countries. Russia threatened to interfere with these—raising tariffs, inventing health concerns and delaying trucks at the border for up to three days.

Ukraine also imports 60 percent of its natural gas from Russia, effectively allowing Moscow to kill Ukraine’s economy at will. Completely shutting off Ukraine’s gas damages Russia’s reputation in the rest of Europe, pushing the Europeans to look for other suppliers. So instead, Russia charges Ukraine a high price.

Meanwhile, Russia has been conducting a long-term offensive to win Ukraine’s hearts and minds. This offensive includes funding blockbuster movies that extol the two nations’ shared heritage. Such initiatives could give Russia a more enduring hold on the country than its promises of threats and bonuses. Roughly 30 percent of the nation speaks Russian, which already gives Russia a lot of cultural influence.

One of Russia’s most important tools, however, is the Russian Orthodox Church. The head of the church, Patriarch Kirill, allegedly worked for the kgb during the Cold War. He makes frequent trips to Ukraine, trying to woo back part of the Ukrainian Orthodox Church that broke away from Moscow after the fall of the Soviet Union.

Forced more by short-term threats than these long-term efforts, Ukrainian President Viktor Yanukovych met Putin at a military airport near Moscow on November 9. Shortly afterward, Ukraine’s agreement with Europe was over.

Ukraine’s pullout turned Europe’s Eastern Partnership summit, held on November 28 and 29, into a failure. In fact, it has ruined the whole initiative, which was designed to bring former Soviet countries into Europe’s orbit.

Moldova and Georgia both initialed agreements at the summit, but crucially they did not sign them (despite some news outlets reporting that they did). The difference is important. Ukraine had also initialed the agreement, but the deal is not done until it is signed. Georgia and Moldova have merely committed to working toward signing a deal at a later date.

Besides, both of these countries contain breakaway regions occupied by Russian troops. They are all but defenseless against Russia. If Russia still wants to prevent them drifting toward Europe, it has plenty of time to “do a Ukraine” on them and persuade them against signing the association and free-trade agreements.

The Eastern Partnership program was designed to bring six former Soviet nations into Europe’s sphere of influences. The states: Armenia, Azerbaijan, Belarus, Georgia, Moldova and Ukraine. The score at the moment? Russia 6, Europe 0.

This defeat could be deliberate. The Trumpet has speculated before that Germany’s and Russia’s interests overlap in so many areas—the Balkans, Cyprus, Syria, Eastern Europe, etc.—that they may have come to some kind of arrangement that the other European nations wouldn’t necessarily be in. Europe is so divided anyway that all Germany needed to do to prevent Ukraine’s participation in the Eastern Partnership program was refrain from giving Ukraine its wholehearted backing.

Even without a deal, Germany and France probably didn’t want to anger Russia by competing too hard for Ukraine. Europe is undoubtedly worried about the rise of Russia. But with the euro crisis causing unprecedented levels of unemployment and civil unrest, now is not a good time to pick a fight with Moscow.

And Europe’s defeat could still change. Europe may still manage to draw in Georgia and Moldova, leaving the two nations in an awkward limbo—oriented toward Europe, but with Russian soldiers within their borders.

Hundreds of thousands may have turned out to protest in Ukraine. But this is unlikely to change Ukraine’s course. The protests are smaller than in the 2004 Orange Revolution that brought a pro-European government to power. And the protesters don’t represent the whole population—they’re mainly students and Ukraine’s middle class. President Yanukovych will probably be able to weather the unrest.

But his attempt to balance between Europe and Russia could soon be over. While Yanukovych has steered closer to Russia than his pro-European predecessors, he does not want to be demoted to Putin’s puppet. So he has tried to play Europe and Russia against each other, keeping Ukraine balanced in the middle.

In the tussle over the past few months, Yanukovych has lost that balance. He could regain it, but it will be challenging. Ukraine’s financial situation is bleak. It has to pay the International Monetary Fund (imf) $3.7 billion next year. Without outside help, Ukraine is in for some trying times.

Unless Ukraine makes a U-turn, that help won’t come from the EU or the imf. Which leaves Russia as the only option.

Either way Russia has succeeded—for now—in its primary objective in preventing Ukraine from aligning with the West. It is also closer than ever to making Ukraine little more than a satellite state. If Ukraine joins up to Russia’s customs union, it must give Russia veto power over any other trade arrangements. Ukraine will be unable to form alliances with other nations without Russia’s permission.

All of this leaves Russia more secure within its own borders than at any time since the 2004 Orange Revolution—perhaps even since the fall of the ussr.

Russia still has some major economic challenges, but this extra security could give it greater freedom of action. Given its recent behavior, a more assertive Russia is not an exciting prospect. For a picture of what this could look like, read our article “Czars and Emperors” from the latest edition of the Trumpet magazine.