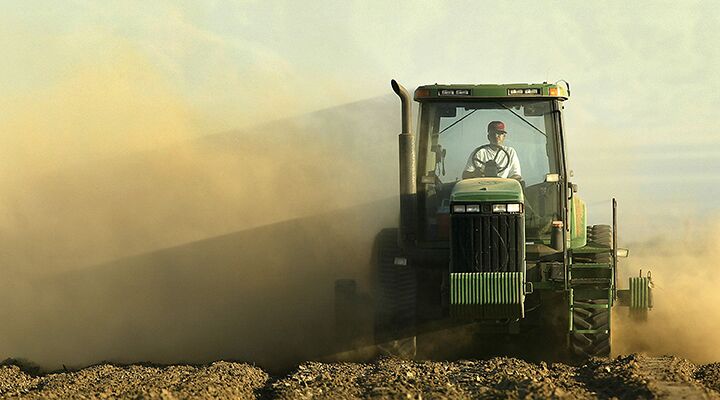 Last year a group of scientists gave an unusual warning about the collapse of global civilization. The threat wasn’t global warming, an asteroid impact or even nuclear war. Their warnings revolved around something much more mundane: dirt.

Except, as those scientists are discovering, dirt isn’t really boring at all. In just a cupful of healthy soil, there are more living organisms than there are stars in our galaxy. More different types of organisms live in that cup of dirt than in the whole of the Amazon rainforest.

An incredible world lies hidden beneath our feet. But this subject is of much more than simply academic interest. Our survival relies on the health of that soil.

This is a world we are only just beginning to explore, let alone understand. But modern farming practices, such as our widespread use of fertilizer, are destroying those amazing and critical organisms.

What we have been doing to our soil is the equivalent of strip-mining the Amazon rainforest. And we have little idea what the results of that destruction could be.

The Wonders of Dirt

“We know more about the movement of celestial bodies than about the soil underfoot,” said Leonardo da Vinci. Modern scientists say that remains the case today. But we are starting to get a glimpse into that world.

One of the most recent discoveries revolves around something called mycorrhizae. These are filaments of fungus that grow on plant roots. These fungi act as extensions to a plant’s root network, allowing it to draw nutrients from a much larger area.

That in itself is amazing—plant and fungus working together to their mutual benefit. But last summer, researchers from the UK found that these mycorrhizae link up, creating a sort of underground Internet, connecting different plants together.

Perhaps a telegraph system would be a better analogy. The researchers found that when one plant was attacked by aphids, it would send a signal through the mycorrhizal filaments warning the other plants. These plants would have an early warning to go into defense mode, producing chemicals to repel aphids and even call for reinforcements by secreting a chemical designed to attract wasps, which eat aphids. The mycorrhizae help plants defend against disease in the same way, with sick plants using the network to get out an early warning.

All this is from just one type of fungus. Yet dirt holds many more potential wonders.

Modern farming, however, is destroying these living organisms. Our use of chemical fertilizer has radically changed the soil we farm, according to a recent study of the American prairie conducted by scientists at the University of Colorado. The soil’s fertility could collapse because of the damage done to the range of microbes that play a vital but little-studied role in soil fertility, they concluded.

“The soils currently found throughout the region bear little resemblance to their pre-agricultural state,” concluded the study, conducted under associate professor of microbial ecology Noah Fierer. “We really know very little about one of the most productive soils on the planet, but we do know that soil microbes play a key role, and we can’t just keep adding fertilizers.”

The study showed that uncultivated soils contain minute living organisms that put nutrients back into the soil. These bacteria are not present where fertilizers have been used, which means that this kind of fertilized soil has no way of replacing lost nutrients except through the use of more fertilizer.

This study looked specifically at the soil of the American prairie, but others have shown that it applies more generally. Fertilizers and synthetic pesticides destroy microbial activity. They stop the growth of mycorrhizae, for example, causing the network to break down and plants to draw in fewer nutrients.

How serious is this problem? The study, published in the November 1 edition of Science magazine, was accompanied by another piece warning of the threat that a collapse in soil fertility poses to civilization.

The Lesson of the Dust Bowl

“In the past, great civilizations have fallen because they failed to prevent the degradation of the soils on which they were founded,” wrote Mary Scholes of the University of the Witwatersrand, South Africa, and Robert Scholes of the Council for Scientific and Industrial Research, also in South Africa. “The modern world could suffer the same fate at a global scale.”

“The inherent productivity of many lands has been dramatically reduced as a result of soil erosion, accumulation of salinity and nutrient depletion. Although improved technology—including the unsustainably high use of fertilizers, irrigation and plowing—provides a false sense of security, about 1 percent of global land area is degraded every year” (ibid).

Citing Fierer’s study, the authors warn: “We have forgotten the lesson of the Dust Bowl: Even in advanced economies, human wellbeing depends on looking after the soil.”

The authors say that the perception of soil as merely a kind of container for nutrients has led to “an unprecedented increase in food production”—and a huge amount of pollution and environmental destruction.

Scholes and Scholes dismiss a “dogmatically ‘organic’” approach as impractical, but admit that “feeding the world and keeping it habitable” will require some major changes in agriculture.

Robert Scholes warns that governments eventually reach a point where, in order to feed people, they destroy the long-term health of their land. “We’re running out of new agricultural frontiers, and we don’t have the freedom to make errors any more,” he said. “We are using up our nutrient capital and face a looming food crisis over the next 30 to 40 years. There is a risk that we are going to paint ourselves into a corner. Famine is a very real possibility.” The Scholes point to past civilizations that have overexploited the land to the point where it cannot be rehabilitated. The effects on society can be devastating.

The Telegraph’s international business editor, Ambrose Evans-Pritchard, wrote, “Cautionary stories abound. The east side of Madagascar has been destroyed by slash-and-burn deforestation, perhaps irreversibly in any human time horizon. Iceland’s Norse settlers turned their green and partly forested island into a Nordic desert in the 10th century. They have yet to restore the fragile soil a thousand years later, despite careful husbandry,” (Nov. 27, 2013).

Evans-Pritchard concluded with the following warning: “We are becoming complacent again. The blunt truth is that the world cannot afford to lose one hectare of land a year, let alone 12 million hectares. The added discovery that we’re doing even more damage than feared to the soil microbia should bring us to our senses. We argue too much about global warming, which may or may not be caused by man’s actions, and may or may not catch us this century.

“The global land crisis is almost entirely our own doing. It is closing in on us right now. It can be reversed if world leaders choose to reverse it.”

There is a tremendous lesson in this trend—if only people had the humility to acknowledge it.

What is happening to soil microbes is a familiar story. Human beings believe that, no matter what the law, they can find some way to get around it if they want to. Sometimes it seems we have done exactly that—but then comes the sickening realization that we didn’t see the full picture.

In trying to circumvent the law, we are actually rebelling against the Lawgiver.

While scientists and the rest of mankind must respect certain physical laws that govern our daily lives, many people view the laws revealed in the Bible—governing civil life, morality and personal conduct, and religious life—with scorn and contempt. However, defying those laws leads to trouble just as surely as breaking the physical laws does.

One law in the Old Testament that critics ridicule is the land sabbath. God commanded that every seven years, the land be allowed to rest—there was no pruning or planting (for commercial harvesting), and nothing was to be harvested except what people picked for their own personal consumption (Leviticus 25:2-7, 18-22). To many, this law seems obsolete: Modern farmers can get around resting the land by using fertilizers.

But scientists are now beginning to learn that there is no getting around this law. The use of fertilizers to avoid letting the land rest is a shortcut that wreaks considerable damage to the land in the long run.

God’s law doesn’t give us all the details we need to be successful farmers. But without keeping these laws, we cannot maintain healthy and productive soils. This land sabbath was probably a time to allow plants that put nitrogen back into the soil to grow, and let animals fertilize the land with their microbe-rich manure. The soil even benefits from just being left still. The microbes can grow much faster without the physical disruption that comes from plowing the fields and sowing seeds.

Because of these biblical laws, the Plain Truth, the Trumpet’s predecessor, was warning about the dangers posed by the loss of soil microbes decades ago. At the time, these warnings were far from mainstream. Today, some of the recent papers coming from the world’s experts sound remarkably similar to those Plain Truth articles. The Plain Truth was ahead of its time because it relied on the Bible.

The Scholeses’ paper dismisses a return to this kind of farming as impractical. They are correct in saying that it wouldn’t be easy. In fact, keeping the land sabbath God’s way would require a complete reordering of society. It would require a society that trusts in God to provide a bumper crop of food in the sixth year of harvest. It may require most families to have a garden of their own. It may mean that some of the world’s deserts have to be reclaimed for use as agricultural land—something which, as Evans-Pritchard points out, is possible, but is ignored because of the expense.

But as all these experts acknowledge, our current way of farming is not working. If we keep trying to do it this way—and we will—it will bring famine. The land sabbath, as well as God’s other laws, are the changes we need.

Scientists are now ready to admit, “We really know very little about one of the most productive soils on the planet.” The problem is that they’re not yet ready to admit that the God of the Bible knows all about these soils—and a lot more besides. After all, He created that soil, with all its vast complexity. Sadly, it will take the complete failure of man’s civilization before he acknowledges this.

Once mankind admits that God knows better than they do—on all subjects from family life to international relations and even agriculture, the blessings will flow. We probably won’t completely understand how great the blessings that come from laws like the land sabbath are until the whole of society is keeping them and able to experience those blessings.

But we can still get a sneak peak. Our free booklet The Wonderful World Tomorrow—What It Will Be Like describes that complete change that God’s laws and resulting blessings will bring to the Earth. By studying and thinking on the many prophecies of this coming time of abundance, we can get a glimpse of the blessings that come once man admits that he just doesn’t know best, and the whole planet starts obeying God.