François Hollande’s surrender makes Germany the undisputed head of a union capable of shaking the world. 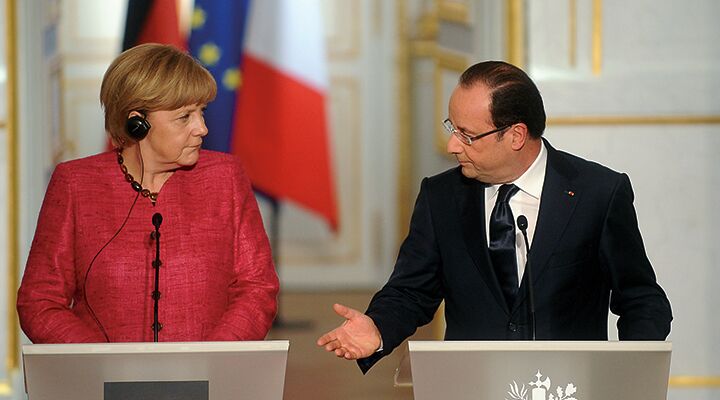 François Hollande’s surrender makes Germany the undisputed head of a union capable of shaking the world.

France might be the most underestimated power in the world. For decades after World War ii, it was the leader of Europe, then co-leader with Germany as the latter rose in power. Its former empire, while less famous than Britain’s, still affords Paris a global system of military bases. France has been a nuclear power since 1960 and is one of only five nations with a permanent seat at the United Nations Security Council.

Now, however, France’s time of co-leadership with Germany is over. At a little-noticed press conference in January, it effectively surrendered that leadership to Berlin. And Germany, by bringing France to heel, massively extended its own power.

That conference finalized a fundamental shift in the Franco-German relationship that has been taking place for some time. It has been clear for years that Germany is the major power in Europe.

Former President Nicolas Sarkozy worked hard to make France look like Germany’s equal. During his tenure, the party line was that France wasn’t surrendering to Germany—the two nations just happened to agree on everything. Sarkozy worked so closely with German Chancellor Angela Merkel that the two became known as “Merkozy.”

When François Hollande was elected in 2012, he destroyed that partnership, threatening war against Germany—fought not on the battlefields, but in the conference rooms. Hollande was Europe’s anti-austerity champion, the antidote to Merkel’s draconian spending cuts. For a while, it looked like Hollande might lead southern Europe in an uprising against German dominance. After all, France was the only EU nation with enough power to challenge Germany.

Now, less than two years later, the promise of a French counterweight to Germany seems like a distant memory. Hollande never really fought in earnest. The southern European confederation didn’t materialize. And at a press conference on January 14, Hollande waved the white flag.

In that press conference, Hollande acquiesced to the German way of doing things, promising to cut taxes and spending. He told the world that Germany’s austere leadership was what Europe needed after all. Whether or not Hollande adopts Berlin-style austere economic policies, that press conference marked his relinquishing of his role as the anti-German champion.

Hollande went on to discuss German-France military relations, again making a U-turn from his previous speeches and promising to increase his country’s cooperation with Germany. “This Franco-German momentum will enable us, if we are able, as I believe we are, to revitalize the European ideal,” he said.

Hollande has now joined a new Franco-German partnership—and his country is clearly the junior partner, doing what Germany tells it to do.

How did this happen? Despite all its power, France has a major weakness: its fragile economy. And one of the major triggers for this capitulation—if not the major trigger—was events in central Africa.

The Fight for Africa

Soon after taking office in May 2012, Hollande launched an offensive in Mali. Germany backed him; after all, radical Islam was an urgent threat, and the potential of a terrorist breeding ground in the heart of North Africa was too serious to use as a pawn in a political game with France.

Then, in December 2013, Paris sent its military into the Central African Republic (car)—alone, without taking the matter to the EU. This was fatal. France’s economy was already weak, probably on the road to requiring a bailout of its own. With the government budget stretched close to its limit, the nation now bore the burden of two extra—and quite substantial—military deployments. These military commitments were unsustainable without help.

Hollande then turned to the EU for support, desperate for money as much as for EU troops. Angela Merkel said no. France could not just launch a military mission, she said, and then turn around and ask for a check.

It was right after this that Hollande gave in to Germany at that January 14 press conference. And less than a week later, Merkel changed her mind. On January 20, twenty EU foreign ministers announced that they would send up to 1,000 soldiers.

Did Germany initially refuse to allow the EU to support France in order to force Hollande’s surrender?

Even though the Germans have now removed their roadblock to France receiving help, they still refuse to give any meaningful support to the car mission themselves—a move that also seems designed to keep France in check.

Historically France has been the dominant colonial power in central Africa. Even now, many of the countries in this region speak French as their main language. France maintains military bases in many of its former colonies and has a high level of involvement in their governments.

Yet despite those advantages, France is losing its economic connection to the region. In 1960, around 17 percent of sub-Saharan Africa’s trade was with France—second only to the UK. As recently as the year 2000, France was the main exporter to sub-Saharan Africa. Now it is in fifth place, behind China, America, India and Germany.

Germany is not content to let France manage North Africa on Europe’s behalf. It has its own separate interests in the region. And it is worried that France will try to use its military operations to regain the influence it has been losing to Germany, among others. So instead of sending troops to the car, Germany has offered to increase its presence in Mali—freeing up France to send more to the car. Rather than being France’s lackey, Germany is concentrating its limited resources in one place so it can maximize its own influence in Africa.

A Staging Ground for Germany

Germany is already doing well in Mali. When Malian President Ibrahim Boubacar Keïta traveled to Europe, he hailed Germany as Mali’s “most important partner” and, on “the international level,” its “main partner country.” That statement is a bit shocking, considering that the nation that put him in power was France.

But German ambitions stretch further. Writing for the Stiftung Wissenschaft und Politik, a think tank that advises the German Parliament and government on foreign policy, research group leader for the Middle East and Africa Dr. Annette Weber wrote, “For the long-term development [of the car], France is the wrong partner.” France’s knowledge and history of the country makes it the most suitable leader of a quick military intervention, she said. But “[i]n the long-term stabilization and support of political actors … France should hold back just because of its past” (Dec. 12, 2013).

If its actions are an indication, Berlin sees the situation the same way. Germany will allow and even support France as it confronts radical Islam in Africa. But it won’t allow France to use these missions to rebuild its influence in its former colonies.

North Africa used to be France’s backyard. Now, it seems, the French can’t launch an engagement without getting German permission.

By initially refusing Hollande’s request for help from the EU, Merkel made an important point. France can’t afford to go it alone anymore. And if it wants help, it had better coordinate with Berlin right from the start. Not only is Germany leading France in Europe, but it is using that dominance to establish veto power over France’s missions in Africa too.

As German leaders began calling for a more aggressive military earlier this year (article, page 2), North Africa was one of their main focuses. “Germany wants and will provide a catalyst for a common European foreign, security and defense policy,” said German Foreign Minister Frank-Walter Steinmeier at the Munich Security Conference on February 1. “Only when we throw our weight together … in the south and the east, will Europe’s foreign policy be more than the sum of many small parts. In this spirit, we are now considering how we can support militarily, specifically the stabilization of fragile states in Africa, especially in Mali.”

At the same event, Germany’s President Joachim Gauck asked, “Are we doing what we could do to stabilize our neighborhood, both in the East and in Africa?”

Last April, Trumpet editor in chief Gerald Flurry wrote, “Northern Africa is turning into a battleground with enormously important prophetic implications.” He noted that Iranian-backed terrorists were spreading throughout the region. “But Iran isn’t the only one interested in Africa,” he wrote. “Germany is making strong inroads as well. Both of these powers are racing to get as much control of North Africa as they can.”

No Western nation has a greater presence in North Africa than France. America claims only one base in the region (though its clandestine presence is significant and hard to quantify), while France has thousands of troops in about half a dozen major bases.

But Germany is using its dominance in Europe to give itself major leverage in France’s African policy. As the EU moves toward a combined military, France’s bases will become more European in nature.

If French power is often underestimated, then so too is the combined power of France and Germany. The EU may be bureaucratic, inefficient and fractious, but it brings together the economic strength of Germany, the military reach of France, and the wealth, resources, experiences and reach of many other nations that are powerful in their own right. There are some huge obstacles to be overcome before they all work together effectively. But the potential for power is huge.

And at the head of this conglomerate is Germany. Now that it has made it clear that France is the junior partner, German power will only grow.

One of the first places we will see that power projected is into strategically vital North Africa!